If you share my passion for monster smallies, you understand it’s of the utmost importance to get out early on... 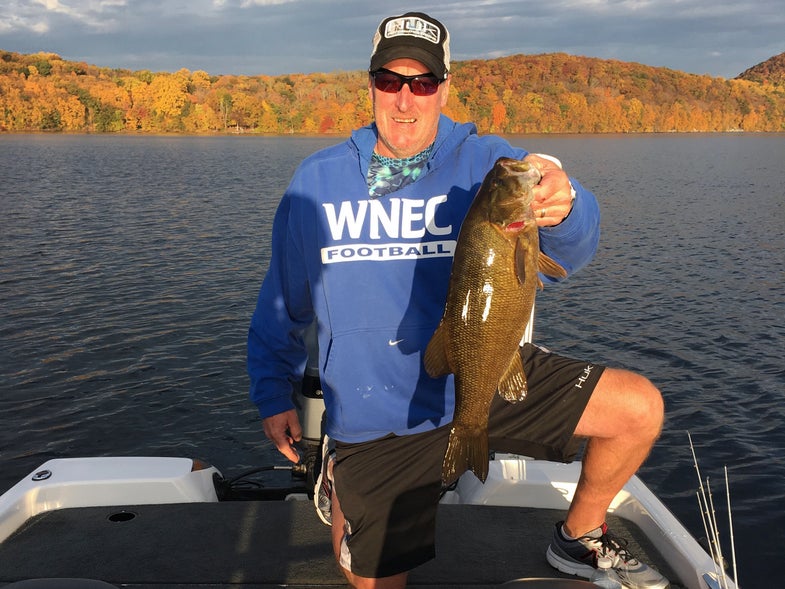 The first half hour accounted for 50 percent of the author and his buddy's bites.. Dave Wolak
SHARE

If you share my passion for monster smallies, you understand it’s of the utmost importance to get out early on fall days, even though the mornings are chilly and the dark sky makes it seem really early. I was recently talking about this approach with my friend Todd Wysmuler from CT (pictured). We agreed that on average fall days, roughly 80 percent of our damage is done in the first two hours of daylight. And we both agreed that the first half hour accounts for 50 percent of our bites, while the rest of the day is often a struggle. That’s a pretty high percentage if you think about it, and we’re pretty sure we know why it often goes down like that.

Let me first say that this early bite isn’t always the only bite in town, because after all, smallmouth are nomadic creatures that seize every opportunity to feed when the time is right. Depending on the weather and water conditions, a big feed can sometimes be later. But on average fall days when the nights are super-cold and the afternoon temps push into the 60s, logic would dictate that the bite would be better in the warmer afternoon. However, while that might be the most comfortable time of day for the angler—which may lead you to believe it’s the most comfortable time of day for the fish—that’s actually not the case. This early bite actually has nothing to do with hitting the fish at a time of days when they’re “happiest,” but hitting them when they’re most accessible to the fisherman.

Big smallmouths like rock piles, deep, old roadbeds, old house foundations, and rocky natural drops. The key is this: It’s not that they leave those areas later in the day, it’s that they suspend above where a finesse bait on the bottom was working at first light. Sure, sometimes they can be triggered later with a suspending jerkbait, a spoon or a Silver Buddy on the fall, but most time those lures are worked at a pace that is just a little too fast for their lethargic liking. Anglers must take advantage of the critical first two hours when they are still holding on the bottom. The suspension seems to begin happening after a few critical hours of sunlight, so if you can stomach the cold and the early alarm time, your fall bronzeback results will dramatically increase.