Opening day has its draws, but there’s nothing quite like a late-season pheasant hunt 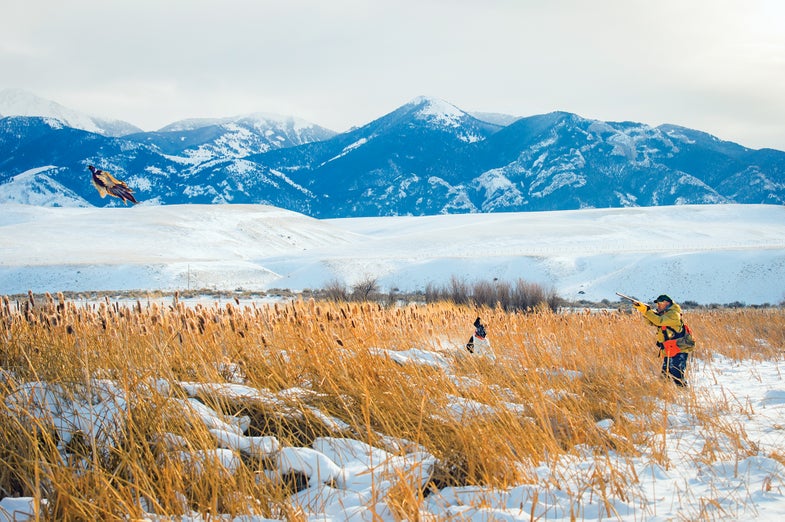 Up, Up, and Away: A Montana rooster flushes from the cattails.. Brian Grossenbacher
SHARE

The world is a much quieter place when the mercury falls below 32 degrees—­provided the wind isn’t blowing, and on this rare day in the Nebraska Panhandle, it is not. In the silent, frozen air, every sound cracks like a rifle shot. The tailgate is unduly loud as I lower it, and the thud of my black Lab landing on the hard snow practically rolls across the landscape like thunder. Pheasants can hear a shotgun’s action slam shut from a half mile away, so I slide the shells in as quietly as possible and control the bolt as it falls into battery.

In the 30-plus years that I’ve hunted this abandoned homestead, it’s rarely failed to give up at least one flush. The weedy 4-acre patch is set far enough off the road that most bird hunters don’t bother. Chokecherry bushes, wild plums, and scrappy willows snag tumble­weeds as they blow by, creating cover that’s virtually impenetrable to anything other than field mice—and pheasants. The birds love to burrow under the snow-covered canopy, safe from most predators.

Aengus hunts close in the calf-deep snow, but he’s still 30 yards from the farmyard when the first rooster flushes. I’m 15 yards behind him. The bird cackles a warning, and the snow explodes as a dozen birds bust from the cover, all at the edge of my range. I trudge quickly ahead, and Aengus circles opposite to the downwind side. A rooster rises close. Of course, it does so with the single tree on the place—a skeletal elm—between us, but as the bird catches sight of the big black dog, it banks toward me and I roll it into the brush. More birds flush, but I don’t dare try to double. Aengus, now a decade old and experienced, also ignores the fireworks show of flying feathers and is on the dead rooster right away.

As much as I love opening day—the camaraderie of old friends, the excitement of new puppies, the gamebags heavy with young-of-the-year roosters—it’s these late-season hunts with snow on the ground and a good dog in front of me that I crave. Typically, it’s a short hunt before work, when the fields are quiet. More often than not, I don’t come home with a bird, but I always see them, or at least their fresh tracks in the snow as they run ahead of me. At this time of year, my hope is that just one will hold tight enough for a shot.

It’s pretty much impossible to be silent on winter days like this, but try to keep sound to the minimum. This is not a hunt for poorly trained dogs. When necessary, give commands with a whisper or a hand signal. Slam a truck door and your odds of a shot drop to nearly zero; park far enough away from the hunting spot and walk as silently as you can. Fresh snow is best. Each step on old, frozen crust is like an alarm to pressured pheasants.

No matter how quiet you are, those wily winter birds that have survived the opening-day onslaught most certainly know they’re being hunted. Outsmarting them isn’t easy. Pressured pheasants will pattern hunters, so give them something they haven’t seen. If you’re relegated to public ground, don’t hunt it like the masses do. Approach the field from opposite the parking lot, even if that means a long walk around. As you hunt, move in an irregular, zigzag pattern and stop frequently. Late-season roosters often would rather run than fly, but they get spooked easily and will flush when nervous.

I’m stuffing the first pheasant into my vest when another bird busts from the snow, so close that I flinch. By the time I recover enough to shoulder the shotgun, the pheasant has the wind behind it and is flying fast. The long barred tail waves enticingly, drawing my attention. I miss clean, my shot passing well behind it. I refocus on the beak, put some air between it and my barrel, and pull the trigger. The rooster falls to the ground like a stone.

Past the farmyard is a long row of head-high spruce and hackberries. These conservation projects can be honey holes late in the year, but I usually leave this particular spot to the pheasants. The birds need a haven on the harsh prairie. Still, pheasant populations are the highest they’ve been in years, and one bird shy of a limit, I feel little guilt in invading this sanctuary for a chance at a third bird in the vest.

Again, the flushes come wild. As Aengus and I weave through the trees, the only pheasants we get up within range are hens. At the end of the row, fresh tracks fan out in all directions and I spot a couple of roosters sprinting across the winter wheatfield well ahead. Oh, well. Two birds in the bag are two more than I expected. After a brief chase of the running birds, Aengus returns to my side with a slow step, knowing the hunt is over, and we turn toward the truck.

Halfway there, Aengus starts working the ground ahead of me. The cover here is thin—the grass laid over by the wind-driven snow of an earlier storm. His thick black tail spins ever quicker in a tight circle, but it’s when he slams to a stop and stares into the small patch of brush that I know we’re onto something. “Get ’em,” I shout, the need for silence long past.

Aengus shoves his nose into the snow and a rooster erupts with a rat-a-tat cackle. It’s a gimme shot, almost anticlimactic in the grand scheme of the late-season game, but I’ll take it. With just a month left for hunting and more snow in the forecast, there’s enough time for a few more wild flushes, missed shots and, with luck, another quiet walk weighed down by the fading warmth of a wise pheasant in the gamebag.

Late-season pheasants are notoriously tough to kill, and shot opportunities can be just as hard to come by. Make the most of every flush—even those at the far edge of a shotgun’s range—by packing powerful loads. I like Federal’s Prairie Storm FS shotshells ($21; ­federal​premium.com). They combine copper-​​plated shot with the company’s deadly Flite­Stopper winged pellets in a hot load that’s incredibly ­effective at longer distances. —D.D.