Researchers believe that moose ranges in New England could shrink northward in the future, according to the Boston Globe. As... 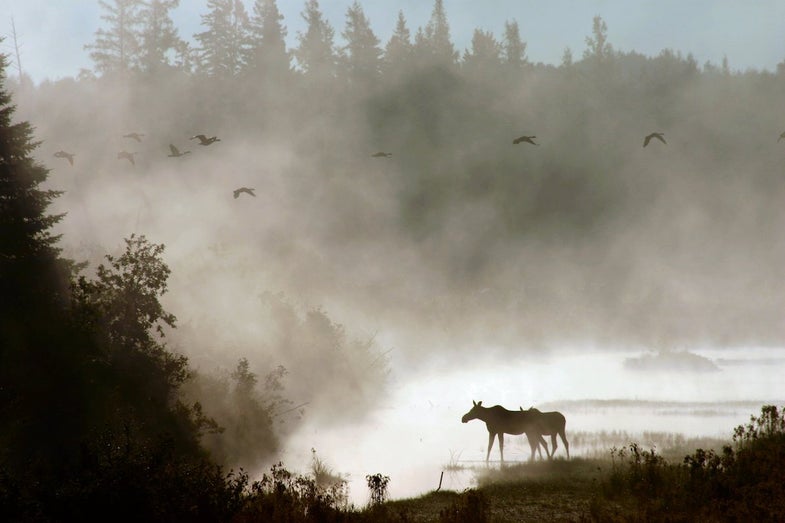 Researchers believe that moose ranges in New England could shrink northward in the future, according to the Boston Globe. As part of a three-state study—the largest ever conducted in New England—scientists have discovered that winter ticks are killing about 70 percent of the moose calves in Maine and New Hampshire. Vermont is also taking part in the study, but just recently began capturing and collaring animals.

The Boston Globe reports that winter ticks, which can attach by the tens of thousands to individual moose, are prospering as a result of higher temperatures and shorter winters that allow them to live longer. Unlike deer and other animals, moose are unable to remove the ticks from their bodies by grooming.

“The moose are being literally drained of blood,” Pete Pekins, chairman of the Natural Resources Department at the University of New Hampshire, told the Globe. “This is about as disgusting as it gets out there.”

For four years Maine and New Hampshire have been capturing and fitting moose with GPS collars, which allow researchers to track the animals. The collars transmit twice a day and also relay mortality signals when there is no movement for a certain period of time, according to the Maine Department of Inland Fisheries & Wildlife.

“Once we receive a mortality signal, we locate the dead moose within 24 hours,” said Lee Kantar, Maine’s moose biologist.

Though researchers said that New England’s moose population isn’t at risk for extinction, their numbers have dropped in recent years. Maine’s most recent population estimate, from 2012, is 76,000 animals. In the early 2000s, New Hampshire had 7,500 moose, compared with the most recent estimate of about 4,000. Vermont had about 5,000 animals a decade ago, a number that’s been reduced—in part, by hunting—to about 2,200 today.

If winter tick populations remain high, the moose that remain could be less healthy and less likely to successfully reproduce.