Pull the Trigger to Clean Your Shotgun Bore 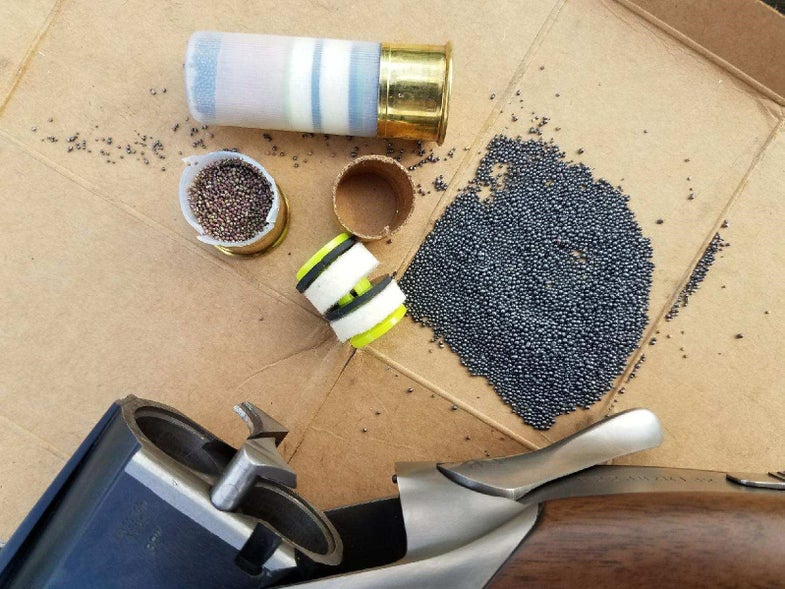 File this one under: What will they think of next?

People have loaded lots of things into shotshells (spices, flower seeds, loved one’s ashes), but the Huntego CleanShot is the first shotshell I’m aware of that holds a cleaning system for your bore. CleanShot inventor Curt Whitworth tells me that one day “I saw this product in my head,” and he started working on it, eventually quitting his job to devote himself to CleanShot full-time. The idea of CleanShot is simple and appealing. After you’re done shooting, you load a CleanShot shell, pull the trigger and, according to Whitworth, you remove 95 to 97 percent of the fouling.

Whitworth tested many, many different combinations of cleaning components. What he came up with was a shell loaded with a paper shot cup on top full of “free flow” lead, which are tiny little pellets used in radiation shielding. Those are there to provide enough payload weight to boost pressure to around 9600 psi. Underneath the free flow, there are two felt wads and two neoprene rings around a collapsible plastic post. When you shoot the shell, the weight of the free flow shot pushes down, causing the post to spread open and forcing the cleaning wads and neoprene rings against the bore. The first wad cleans the bore and the neoprene ring squeegees it, then the next wad and ring repeat the process. Whitworth says he tried putting lube in the cleaning pads, but it didn’t work, as the burned powder and primer residue clung to it.

I shot several very dirty reloads through the bottom barrel of an o/u the other day, leaving it full of powder flakes. Then I tried a CleanShot shell. When I looked down the bore, the flakes were gone and the bore was clean. Shiny, even. There was a bit of residue just ahead of the chamber, which Whitworth later told me was likely from the primer.

So yes, CleanShot works in the sense that it does blast most of the fouling out of the bore. It does not take the place of a proper cleaning with brushes and oiled patches, but it can put off the time that such a cleaning becomes necessary. Incidentally, there is enough free flow lead in each shell to break a Station 8 skeet target (I tried) so you should treat these as carefully as you would any other shotgun shell. Using one to clean your bore when you get home is a very bad idea. Use it before you leave the field or the range.

CleanShot will sell for $9.99 per four; huntegoltd.com.