A Wisconsin Tradition: Spearing 100-Pound Sturgeon Through the Ice

Wisconsin kicked off its annual sturgeon-spearing season on Saturday, offering nearly 13,000 people the chance to stick fish that can... 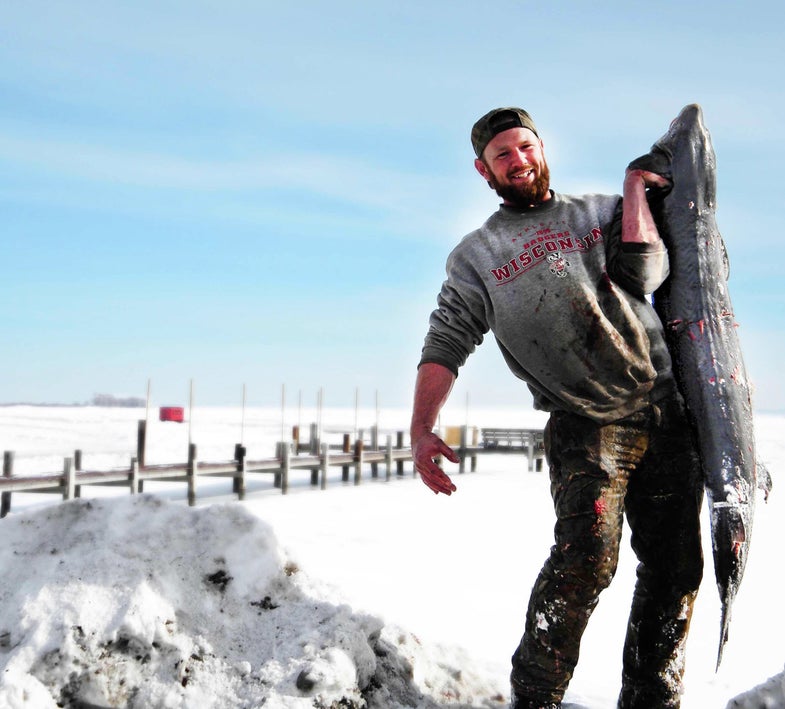 Wisconsin kicked off its annual sturgeon-spearing season on Saturday, offering nearly 13,000 people the chance to stick fish that can live for more than a century and weigh up to 200 pounds. The season opened on four lakes—Winnebago, Poygan, Butte des Morts, and Winneconne—and will continue for 16 days, though good conditions and high success can lead to early closings once harvest caps are met.

As of today, the largest sturgeon speared this season is an 83.4-inch female weighing 154.9 pounds. At least 38 fish weighing 100 pounds or more, and 664 total sturgeon, had been speared by the close of fishing Tuesday.

In Wisconsin, modern sturgeon spearing dates back to 1901, but the sport was banned from 1915 to 1931, as a result of fledgling sturgeon numbers. Today, Lake Winnebago enjoys the largest sturgeon population in North America.

Sturgeon spearing is similar to ice fishing in that the spearfishermen set up shanties on frozen lakes. The anglers use decoys to lure in the sturgeon, and then wait for an opportunity to drop their spears. Good visibility is required for a successful day, Ryan Koenigs, a sturgeon biologists for the Wisconsin Department of Natural Resources, told Fox11 News. Cloudy waters, he said, led to a deflated harvest in 2016: “Ice conditions were good to start off [last] season, but deteriorated as the season went on due to rain and warm weather.” In 2015, 1,870 sturgeon were speared on Lake Winnebago; that number fell to 396 in 2016, because of poor water conditions caused by higher temperatures.

Sturgeon numbers appear to be rebounding this season, though. One hundred and eight fish were speared on Lake Winnebago’s opening day, compared with only 84 last season. “Overall, I have to say things are off to a good start,” Koenigs added. “The highlight of [Saturday] is the size of some of the fish harvested. Of the 198 fish harvested from Lake Winnebago, 15 were 100 pounds or larger.”

You can follow along with how the season progresses here.