Some years ago, Darex, an Oregon company that has manufactured sharpening equipment for four decades, jolted the world of knifery... 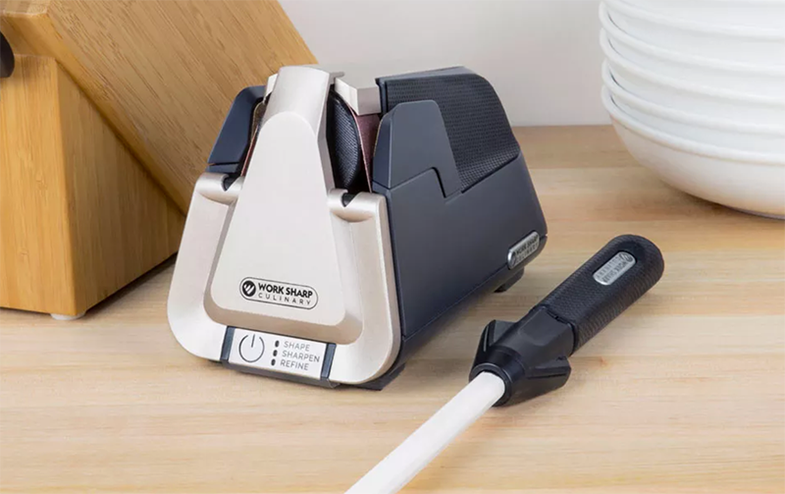 Some years ago, Darex, an Oregon company that has manufactured sharpening equipment for four decades, jolted the world of knifery by introducing Work Sharp, an electric sharpener that employed abrasive belts, not wheels, so it would not burn your blades or tear off great gouts of steel. Most important, Darex took the need for skill out of the equation. The veriest dolt could now stick the dullest knife in a Work Sharp sharpener, and in a minute or so, come up with an edge that would give Jack the Ripper shivers of delight.

But all was not perfect. The original Work Sharp machines (including a later, more sophisticated model developed by knife designer Ken Onion) looked like machines for sharpening knives, and so they found themselves banished from kitchens, where they could probably get the most use, to garages and workshops.

Considering the surpassing rottenness of most kitchen cutlery, this was a sorrow and a pity. If you can get an edge on most of the wretched things, it will vanish after the first raw carrot. In fact, I’ve taken to using hunting knives in the kitchen. You can get them sharp, and most of them stay that way for a while.

An aside: If you’d like to upgrade, try the DiamondBlade Pro Series Peregrine in the kitchen. I guess you would call it a paring knife. It will cause you to throw all your other small knives in the trash. Also, any of the high-grade Japanese kitchen cutlery, although some of it requires a fair amount of maintenance. Or the Ontario Knife Company’s Old Hickory Line, which has been around since 1924, has wood handles, tool-steel blades, costs next to nothing, and gets very, very sharp.

Which brings us to the ultimate transmogrification of the Work Sharp line, the E5 Electric Sharpening System. It consists of an electric sharpener which looks nice enough to keep in the kitchen, a ceramic honing rod and, if you want one, an upgrade kit which enables you to sharpen cleavers, and other fearsome objects. Not only is the E5 acceptable looking, but it’s completely automatic. All you do is push a button to either re-shape a blade to a rolled edge, sharpen a blade, or put on what Darex calls a MicroForge edge, with is sort of half-serrated and half straight and cuts savagely.

Push the button to program the E5, and keep sliding the blade through slowly until the machine stops. It knows when to stop because it’s smarter than you are. If your knife is not sharp enough to slice tomatoes so thin you can read a newspaper through them, repeat and it will be.

The ceramic honing rod looks like a sharpening steel, but you don’t slap the blade down the edge. You put the rod end down on a hard surface, line the blade up with a built-in guide, and slide the knife down slowly. Even Bill Heavey could do it.

The E5 sharpener has a real-world price of $200. The ceramic sharpener is $50, and the upgrade kit is also $50. Worksharpculinary.com