From treestand port-a-potties to inflatable hunting partners, it’s no surprise these products never took off 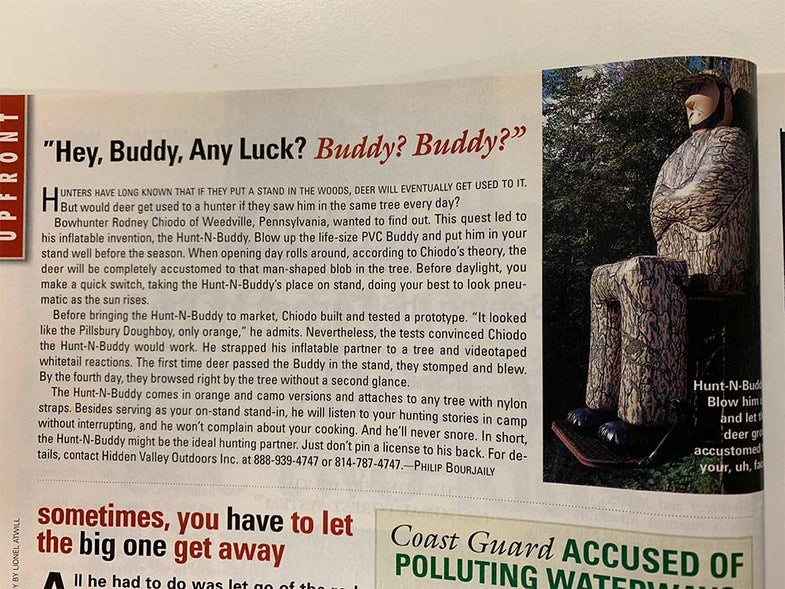 Phil "reviewed" the Hunt-N-Buddy in the December 1998 issue of Field & Stream. "The Hunt-N-Buddy might be the ideal hunting partner," he wrote. "Just to pin a license to his back.". Colin Kearns
SHARE

My post on the top 10 hunting products of my lifetime prompted a reader question from Ontario Honker Hunter, who asked, “What is the worst hunting product of your lifetime?”

If I were in a more curmudgeonly frame of mind, I could name anything that makes hunting easier or is higher tech that didn’t exist when I was younger: ATVs, trail cameras, cell phones, for instance. But, I can see how ATVs are a godsend to deer hunters; that trail cameras must be a lot of fun; and personally, since I am as bad as any teenager with my phone in the field, who am I to criticize them? Cell phones are a blessing for those of us with short attention spans when we have to sit patiently and wait for game. I know I used to do it before cell phones, but it was really boring.

Besides which, I am of the belief that our grandfathers weren’t necessarily tougher than we are—they were just miserable most of their time outdoors. They’d have been thrilled to have the gear we take for granted now.

I could rant against the trend for high-velocity shotshells and the 3 ½-inch 12 gauge, but even though I don’t like them, I can grudgingly admit they have their niche. They just don’t have a niche at my house.

Where does that leave us in our quest for the worst? SHOT Show, for starters, where along with the truly latest-and-greatest gear, you get to look for the latest junk.

There was the Tree Whiz—a urinal you could hook onto the tree along with your stand. It came with a long tube that extended down to the base of the tree, and it was attached to a reservoir you could bury. About the time the Tree Whiz came along, hunters decided the smell of human urine didn’t alarm deer after all and you could let fly with impunity. The Tree Whiz became obsolete.

Then there was the Hunt-N-Buddy, which wasn’t the worst hunting product ever invented, but maybe it was the silliest. It was a two-piece, life-sized inflatable deer hunter, available in both camo and blaze orange. The idea was that you put the Hunt-N-Buddy in your treestand before the season, so the deer would get used to the idea of seeing a person-shaped object up in the air. Then, on opening morning you’d slip into the stand, deflate the Hunt-N-Buddy and sit very still, looking vinyl-y, and the deer would never know you were there until it was too late.

The truly worst, though, had to be the Wise Hunter vest, a blaze orange Kevlar vest designed to keep you safe when pellets and bullets started flying on opening day. There are so many things wrong with that idea that it’s hard to know where to start teeing off on it, but it had to be the most wrong-headed hunting invention I have ever seen. If hunting were so dangerous I had to wear body armor, I’d find something else to do in the fall.