The Yellowstone River vs. Oil

(Editor’s note: This is the third of a three-post series about the Yellowstone River, the longest undammed river and one... 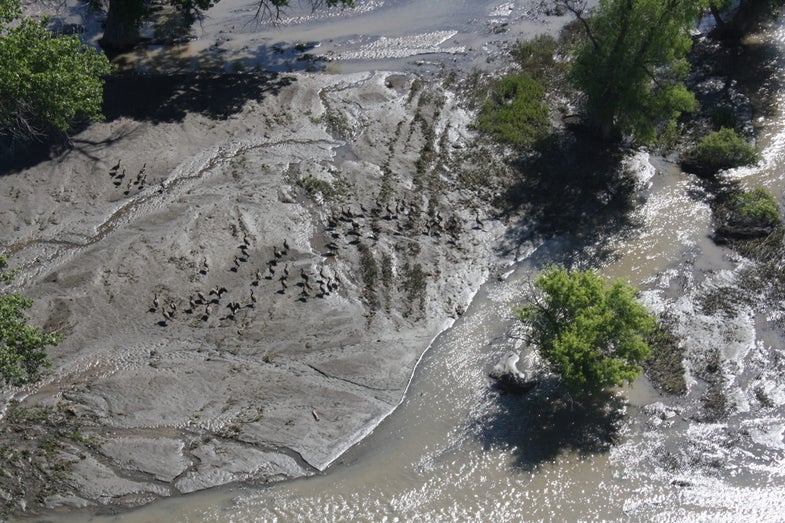 Canada geese in an affected portion of the Yellowstone in 2011, after an ExxonMobile pipeline burst, spewing thousands of gallons of oil into the river. Courtesy of United States Fish and Wildlife Service/ David Rouse
SHARE

(Editor’s note: This is the third of a three-post series about the Yellowstone River, the longest undammed river and one of the best wild trout fisheries in the continental U.S. Read the first post in the series, here.)

If there is one thing that irrigation-dependent farmers, residents of towns that use the Yellowstone for drinking water, and fishermen-conservationists should be able to agree on, it’s that a river fouled with petroleum is in nobody’s best interest. But even this idea seems to generate little energy along the lower Yellowstone. During the first week of June in 2011, during one of the biggest floods since 1997, an ExxonMobil pipeline succumbed to the force of the raging waters and the epic amounts of debris carried on the flood.

An estimated 63,000 gallons of oil spewed into the river and fouled ranches and farms downstream, the oil finding its way to the highwater mark in flooded croplands, pastures, and hayfields. The response? Not exactly what most landowners along the river expected. Rancher Kit Charter Nilson told a USA Today reporter, “We are trying to understand that this is a big thing, and they’ve got a lot going on, but we have not gotten any answers to any of our questions…. Our concern, first of all, is our health. What is in this crude? What can it do to you?” Exxon would spend $135 million on the cleanup, and recover less than 1 percent of the spilled oil. Last September it was announced that the company would pay $12 million in fines for the pipeline rupture after “a U.S. Transportation Department investigation determined Exxon workers failed to heed warnings that the 20-year-old pipeline was at risk. The agency considered but rejected new rules to make companies bury pipelines more deeply beneath waterways.”

In January of 2015, another oil pipeline ruptured upstream of Glendive. The Montana conservationist and writer Alexis Bonogofsky, whose family farms along a stretch of the river contaminated by the 2011 spill, wrote this, of the 2015 spill: “Sonar testing showed about 110 feet of pipeline was exposed along the bottom of the river. In one area, river scour had removed almost an entire foot of dirt and rocks underneath the pipe, leaving it completely exposed for 22 feet. During this ‘release’—which is the term that industry and government use to refer to oil spills—over 42,000 gallons of oil spilled into the Yellowstone River.” Bonogofsky continues, “When oil spills happen, not just those on the Yellowstone, I feel like I’m living in the movie “Groundhog Day,” except I get to relive oil company executives and government officials saying the same things about pipeline safety. ‘We need to learn from this,’ ‘We need to reexamine the federal rules regarding depth of cover,’ ‘This is serious.'” Her excellent essay, written from the point of view of someone for whom the spills are not just distant news: “I made one trip to the hospital with acute hydrocarbon exposure, along with many other people who live along the river and, for one year after the spill, it hurt my lungs to take a deep breath. We are on year five and countless hours of trying to rebuild our soil and restore our pastures back to their original condition.”

If you’ve stayed with me this long, I’ll add only this: water rights on the lower Yellowstone, if used to their capacity in the future, will not leave room for a fishery or a functioning river. There is little reason to think that, at a time when our human population and the agriculture that is needed to feed it is growing at an exponential rate, the Yellowstone will not be front and center in the battle to keep our natural systems and the fishing, property values, and quality of life they provide, intact in the face of overwhelming need and use. This overwhelming need will only be increased if much of the water resource is fouled with oil, and, as is increasingly the case right now, runoff from agricultural operations along the river’s course.

Scott Bosse of American Rivers told me that he was seeing something that he had not seen before in his work on the Yellowstone. “I was in Glendive [Montana] after the last oil spill, and the drinking water had been shut down due to the contamination. But a lot of people there told me that they never drank the water from the Yellowstone anyway, because it was so polluted. I just thought that was so sad. I mean, we’re talking about the Yellowstone. We cannot let this happen. We can’t normalize dirty water like that.”

What seems most sad about the current challenges facing the Yellowstone River is the lack of interest shown by so many Americans, fishermen and hunters and just common citizens, to the fate of a river that is a national icon and a treasure of both our history and our economy. It is as if we have lowered our expectations of ourselves and our country, abdicated responsibilities to our future that people like Roger Muggli, or flyfishing legend Dan Bailey, who fought the proposed dams in Paradise Valley, took on willingly, effectively, and with such great enthusiasm. Every one of the problems facing the river right now has a reasonably simple solution, and we know what these solutions are. None of those solutions would be as expensive to fix now, as they will be later, when the problems have become more entrenched and intractable. A healthy and powerful Yellowstone River, from its headwaters to its mouth at the Missouri, would be not just an economic powerhouse for the region, ensuring irrigation and recreation and property values for decades to come, it would be a huge source of totally justified national pride. To allow our river to slide into ruin will say something terrible about us and what we have become. We cannot let that be so.