At 11, Carter Stucky decided he was ready to hunt whitetails on his own 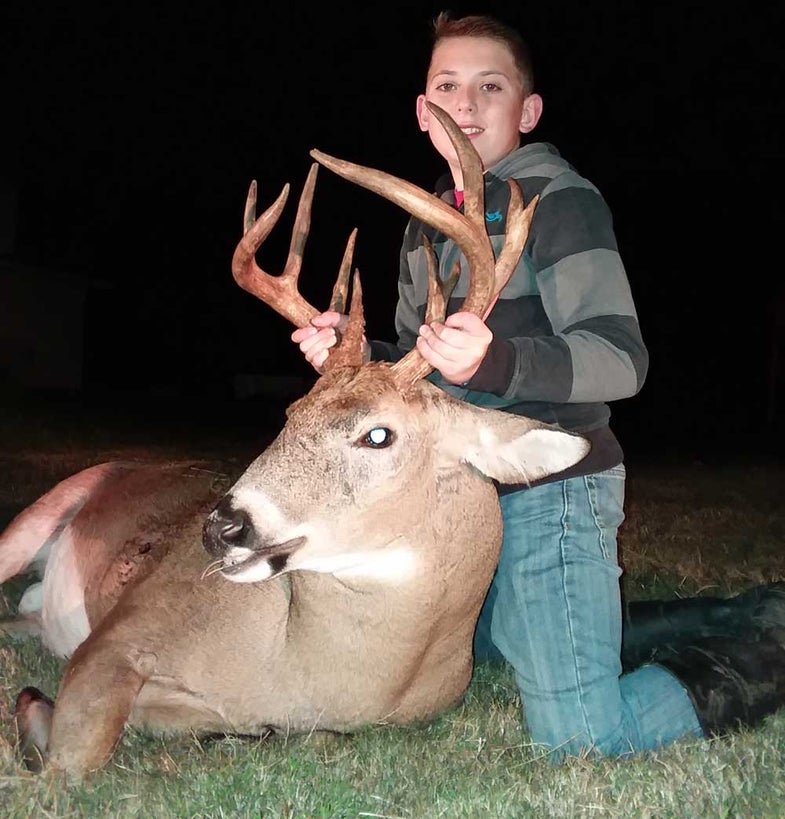 Carter Stucky had a problem. He wanted to go hunting. But his dad—my friend Steve Stucky, son of Richard Stucky, with whom illustrator Jack Unruh and I went on many pheasant hunts—was at a church meeting in town and didn’t like the idea of Carter, 11, going up in a treestand alone. In fact, the boy had never hunted without his dad. Then again, he was in fifth grade. Carter says he figured he was up to hunting on his own, especially if he stayed on the ground. And so Steve cocked the boy’s crossbow before he left home.

“It was really only my second hunt of the year,” Carter tells me. “But I really wanted to go. So I went to the blind we’d made near a food plot. It was pretty scary. I was thinking that some sort of coyote or bear might eat me. I decided the best thing I could do was just stay real still.”

Three does came out within the first 10 minutes. Then a small 4- or 5-point buck. He just got a glimpse of the deer. “A while later, a doe came running out from the cane on the other side of the wheat and turnips we had growing,” he says. “She came crashing out like she’d been spooked out of the cover, then she stopped to look back at where she’d come from, and then she started eating again.”

Nothing happened for half an hour. Then Carter saw a buck 100 yards away, feeding in a grassy area. It left and then came back again. He thought it was a good one but couldn’t be sure: “Then it started feeding toward me. It was practically right in front of me, but it was moving too fast.” By this time, he knew it was a shooter. “So I grunted and stopped it at about 25 yards. And then I shot.” Carter says the buck jumped, turned in the air, and took off running. “But I was pretty sure I’d made a good shot,” he said. “A little bit forward into the shoulder, but still a good shot.” The buck wasn’t super wide, but it was tall. He says he hadn’t had time to count points.

The boy was so excited that he started jumping up and down inside the blind. But he knew better than to try to track it so soon, so he ran the 200 yards to the house and told his mom and older sister. His mother called Richard to come over to help. Eventually, they found the buck just 30 yards away from where it had been shot. The animal wasn’t as big as Carter had first thought, but it was big enough, with 12 points, good height, and good mass.

“I was really proud of myself,” he says. “Now that I’ve got my confidence, I’m going out to hunt coyotes with a .22 Mag.”

Steve says he never pushed his son to hunt. “I just tried to give him the opportunity, but he was the one to decide it was time.” Steve went back later to examine the buck’s footprints. “He was moving at a good trot when Carter stopped him,” he says. He doesn’t tell me how proud he is that his son had the ability and presence of mind to do that. He doesn’t need to.