Most people will never get to shoot a .50-caliber, but they can watch someone else do it 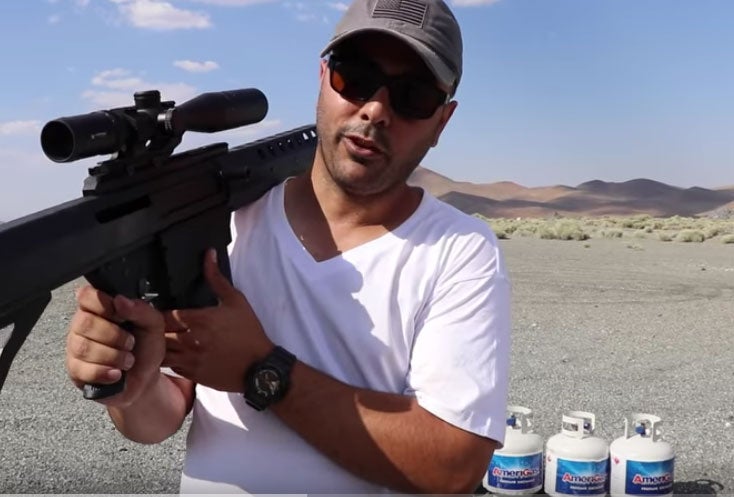 I’m of two minds about youtube watch-me-shoot-my-awesome-gun videos. On the one hand, I get it. You’ve finally got your hands on, say, a .50-caliber, a gun most people dream about. You want to show how how amazing and much it is. There’s an audience for your vids. Why not? Me, I love blowing stuff up.

On the other hand, such videos featuring guns are kind of…dumb. There’s one of some rednecks packing a refrigerator full of Tannerite, shooting it, and nearly being killed by the door barreling towards them. That kind of thing shows gun owners as morons and plays right into the hands of antis.

50 CAL VS PROPANE, a 2017 YouTube video by Edwin Sarkissian, below, doesn’t fall into this category but it flirts with it. A propane canister doesn’t fight back against anything. It’s just there. So you sort of know where it’s headed before the altercation begins. You put a 12-gauge up against a raw egg, guess who’s going to win?

Sarkissian is going to attempt to shoot through four propane cans out in the desert. He was going to do three, but bumped it up to four to celebrate the 4th of July. He’ll be shooting a BFG-50A .50-caliber, a magazine-fed, gas-operated semi-auto that costs $7,350 and weighs 23 pounds unloaded. He opts for armor-piercing incendiary rounds. Which means he’s unlikely to get a refund on the propane canisters. So he’s out more than $150 before anything happens. But it’s his money.

He lines up the canisters, jogs back to his rifle, forgets to put his hearing protection back on, and fires. There is a big explosion and some inspiring music as we go to slo-mo and multiple angles. One of the canisters pinwheels wonderfully in the inferno. But wait. The round only went through two of the cans. “Are you thinking what I’m thinking? Let’s shoot two more,” he says. He goes back, remembers his ears this time, and shoots the remaining cans. Big explosion, more uplifting music, more slow-mo. You would definitely be asked to leave any KOA campsite where you tried this. It creates a large ball of orange flame. Definitely too much for marshmallows.

Sarkissian approaches, uses a fire extinguisher on one canister, approaches another, still burning, and decides to kick it. Personally, I would not do this. If it blows up, you’re kind of screwed. Propane canister shards would make that the equivalent of standing next to a cluster bomb. He kicks it another couple of times. Nothing. This is probably a good thing. And not something you’d want your kids doing.

He signs off, wishing us a happy Fourth. He tells us to be safe. He smiles, says, “Don’t do the things that I do.” Then he giggles again. Who in their right mind would not want to do exactly what he did? I do.