Savvy whitetail hunters know the different vocalizations deer make and how to use products mimicking those sounds to bolster their hunting success. 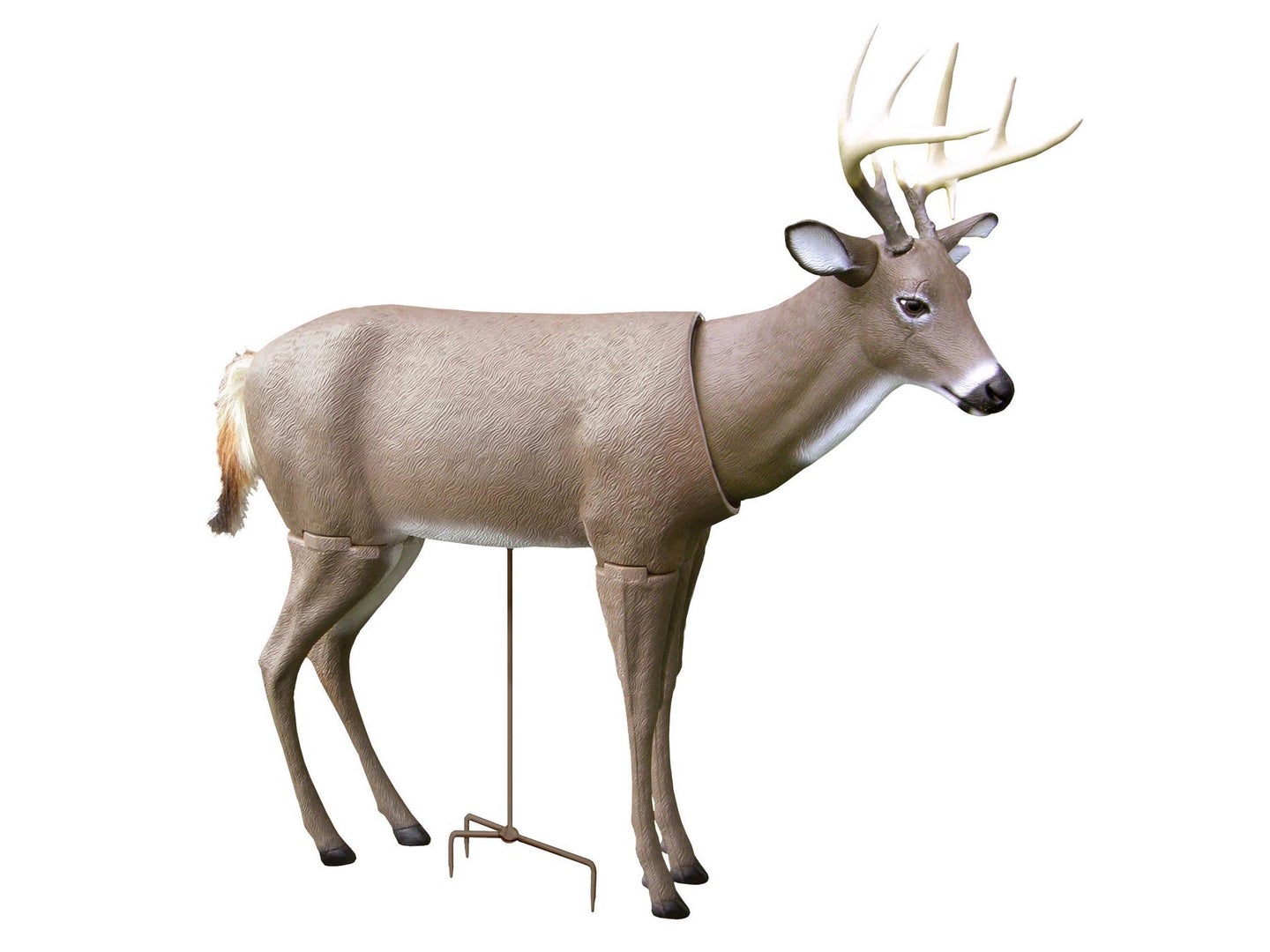 This Scarface decoy from Primos has both a head and tail that will naturally move with even a little bit of breeze. Walmart
SHARE

For many hunters, the only deer sound they’ve ever heard is the loud alarm snort deer make when they sense something is amiss. The resulting “blow” alerts deer near and far that there might be an intruder in the area. Deer, however, have a wide range of different vocalizations they use to communicate with one another. And hunters who know what those sounds are and have the proper calls to mimic them can use those tools to help bring deer to within bow or gun range. Here are 10 things you need to know to successfully call white-tailed deer.

Camouflage Is A Must

A camo hat/face mask combo set like this one can keep big bucks from spotting your face and immediately heading to the next ZIP code. Walmart

Before you can be successful calling deer, you must first gear up in other ways. Especially for bowhunting, full camouflage is a must when trying to call in a buck. The reason why is simple: When you are calling and a buck approaches, he’s going to be looking for the deer that was making the sound. What he’s going to see is you, unless you go to a lot of trouble to make sure you are hard to see. When bowhunting, using something to cover your face is especially important, as a shiny face is the easiest thing for a deer to see when looking around to see where deer sounds are coming from. Note that most states require a hunter orange upper garment and head covering during some firearm seasons, so check local regulations before heading afield in full camo.

This synthetic estrus doe urine, when used during the rut, can help mask your human scent while also attracting bucks looking for love. Walmart

Still not completely calling-related, but a discussion of deer scents is in order here, too. When a buck hears a bleat or doe grunt and comes to investigate, he’s going to be doing more than just looking for what is making the noise. Scientists tell us that white-tailed deer have nearly 300 million olfactory receptors in their noses, compared to about 5 million for humans. And you can bet they’ll be using them when trying to locate the deer that made the calls. Consequently, any cover scents you can use to mask your human odor will give you a slight advantage over that superior sense of smell bucks have. And any odors you can add in the form of doe urine or other deer-specific scents will not only further help mask your scent, but will help convince a buck that it’s really a doe he’s trying to find.

This Big Dog double ladder stand puts you safely and comfortably above where a buck will be looking for the deer that made the sounds that attracted him. Walmart

When a deer passes by your location without knowing you are there, he’ll often trudge right along seemingly unaware of his surroundings. But the fact that a deer responding to a call will come in looking for another deer means hunters are way more likely to be seen than in many other hunting situations. Consequently, getting up high, above where the deer will be looking for the deer, can keep you hidden from even the most alert buck. A good tree stand—whether a fixed stand, climber or ladder stand—is the perfect tool for safely getting you above a deer’s normal gaze. Note, however, that when deer are getting close, you should never call out of a tree stand. If a buck hears a deer sound coming from up a tree, he’s likely to bolt and never be seen again.

A simple ground blind like this Rhino pop-up model can keep you well-hidden when a buck comes looking for the doe he thinks he heard calling. Walmart

If a tree stand is not an option for you for whatever reason, all is not lost. No, you can’t just sit on the ground in plain sight, call a buck and expect him to come walking right up without seeing you. But often a good ground blind can hide you from prying eyes well enough for you to get a shot on the buck that is coming to your call. Portable ground blinds come in two kinds—pop-up style blinds and hub blinds—and both can be used successfully for deer hunting. Note that although turkey seldom notice a ground blind, deer are often very suspicious of them. Consequently, it’s a good idea to put your blind up well before when you plan to hunt and brush it in good with limbs, brush and other vegetation to camouflage it well.

This True Talker grunt call from Hunter Specialties can be used to make mature buck grunts and growls. Walmart

Now about those calls. While deer make a number of different vocalizations, the most common is the grunt. It’s not a loud or excited sound, but a simple grunt used to communicate with other deer. The sound isn’t for any breeding purpose, as deer make it year round. Basically, it’s just simple communication to let other deer know where a buck or doe is. Many companies make grunt calls that are effective for calling deer. Not only will most make the normal grunt mentioned earlier, but most can make the loud grunting sound bucks use to show dominance and even deep, guttural tending grunts. Tending grunts make bucks think the buck you are mimicking is breeding a doe, so will often draw passing bucks in to investigate. Does also grunt, but in a much higher pitch than bucks.

The original “Can” call is easy to use and makes realistic doe bleats to attract bucks. Walmart

Another deer vocalization hunters need to understand is the doe bleat. Does often bleat in social situations to communicate with other deer. That bleat is a higher pitched sound than a grunt, and sounds somewhat like a goat. Typically it is a sign they are content. An estrus bleat, which does make to attract bucks during rut, is similar, but louder and higher in pitch, sounding kind of like a kazoo. When a doe is ready to mate, she’ll stop and make this bleat to any bucks that might be following her. While doe bleats can be made in a number of ways, the simplest is probably can-type calls. These calls are made to simply turn upside down, then turn back upright. When turned back up they make a bleating sound just like a doe in heat makes in the woods.

This Extinguisher deer call system by Illusion can go from fawn call, to doe, to mature buck by sliding your finger further up or down the reed. Walmart

If it’s starting to sound like you might need to carry several calls to mimic deer sounds, you’re catching on. To make matters more difficult, young bucks have a different grunt tone than older bucks and does do. And there’s also a snort-wheeze sound, which is a threatening vocalization produced by bucks by the drawn out expulsion of air through their pinched nostrils. Fortunately, some companies make combination calls that can make more than a single vocalization. And some companies make all-in-one type calls that can make several of the different vocalizations with the same call, depending on how you hold and/or blow it. Because these type calls are available, one or two calls can take the place of a whole pocketful.

This Flextone Battle Bag Plus rattle bag can be used to mimic early season sparring matches all the way up to epic rut battles. Walmart

Another common sound deer make—and one that can be used to attract a monster buck—isn’t a vocalization at all. Rattling up big bucks has been a tactic used for many, many years. By crashing together two antlers, hunters make the sound of two bucks battling, and the fight will often bring in other bucks to watch or join the fracas. Rattling can be done with real antlers that were shed or cut off a former harvest, manmade rattling “horns” and even rattle bags. The latter consists of several wood, hard plastic or ceramic sticks inside a bag made of cloth or rubber. When you rub the bag back and forth between your hands, the sticks bang together to make a realistic-sounding rattle. Throw in a couple of grunts between rattling sessions, and you’re well on your way to success.

This combo pack includes rattling “racks,” an all-in-one grunt call and an instructional DVD about communicating with deer. Walmart

As previously mentioned, combining rattling and grunting is a tried-and-true method for drawing in bucks, especially during the rut. A favorite strategy of many hunters is to rattle for 30 seconds to a minute, grunt a handful of times, then add another rattling session. After that, put the bag down and get ready. A study several years ago by the Quality Deer Management Association came to some interesting conclusions about rattling. Mornings tended to be more productive for rattling than the rest of the day, with 54 percent of bucks in the study responding between 7:30 a.m. and 10:30 a.m. Bucks also responded better on cool, cloudy days with light wind. Also, peak rut and the start of the post-rut were the most productive parts of the season for rattling in mature bucks.

Sweeten The Pot With Decoys

This Scarface decoy from Primos has both a head and tail that will naturally move with even a little bit of breeze. Walmart

If a buck hears a grunt and doesn’t see anything where the sound came from, he’ll often get suspicious. But if he hears a grunt and sees another buck standing there, he’s more likely to get resentful. That’s why decoys can work so well to attract bucks, especially during the pre-rut and rut. Many hunters successfully use doe decoys in the early season to get a buck’s attention. But during the late pre-rut, rut and early post-rut, a buck decoy is what works to really make a dominant buck come in angry. Often, he’ll be spoiling for a fight with the “intruder” that dared to enter his domain. Note that the use of decoys is typically an archery season tactic and can be dangerous if used during a firearm season if another hunter mistakes your decoy for a real deer.