Six pointing breeds and four flushers round out our picks. Now let the fur fly… 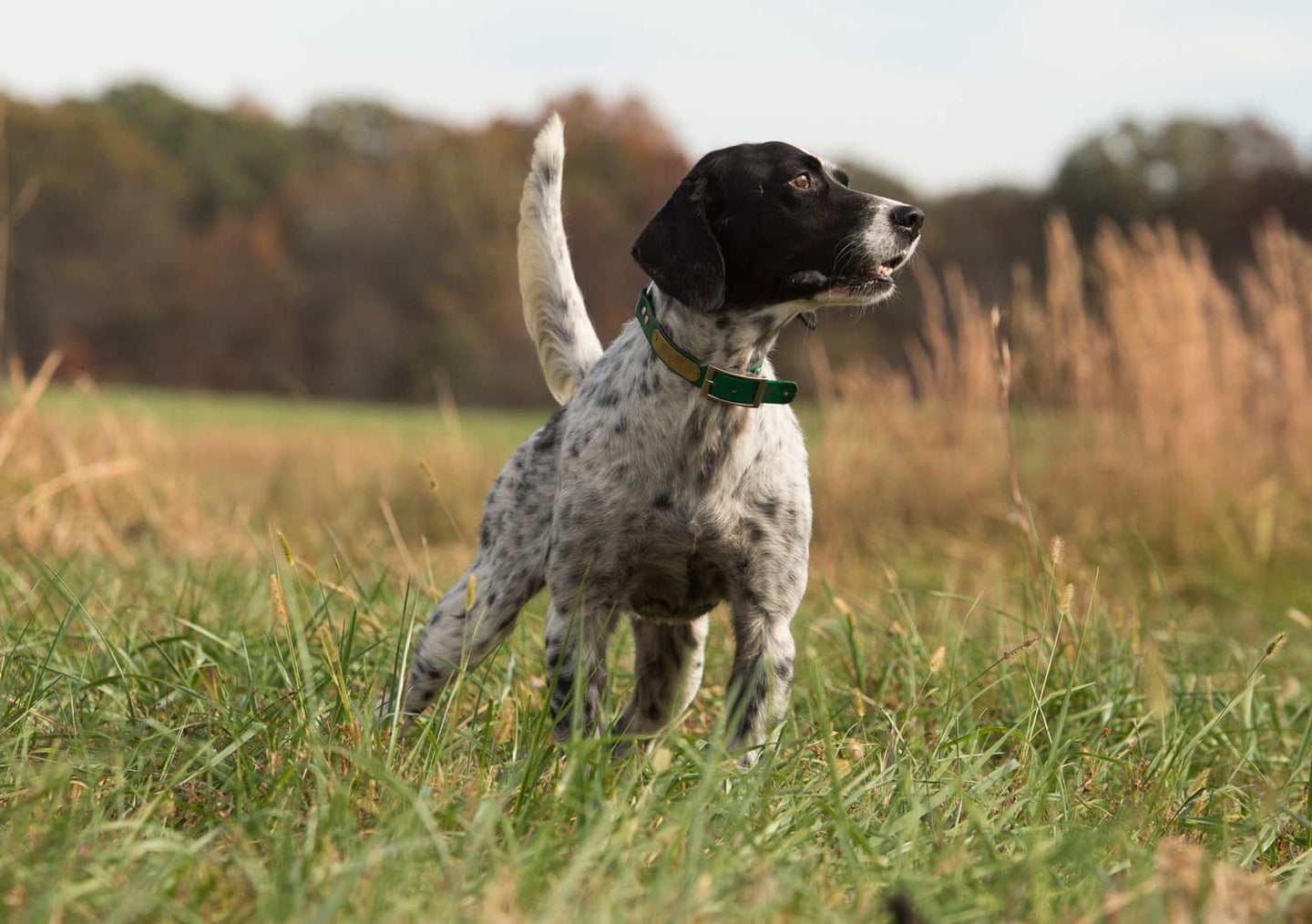 An English setter, on point. Photo Courtesy of Purina
SHARE

Shotguns are a bone of endless contention. But if you really want to see the fur fly, stand up in a roomful of grouse hunters and complete the following sentence: The best dog for grouse hunting is the ________.

Before you do, identify the closest exit, because objects will be thrown at you.

When grouse hunting’s urtext, New England Grouse Shooting, was published in 1942, author William Harnden Foster felt that only two breeds merited consideration: the pointer and the English setter. The field-bred Irish and Gordon setters had fallen on desperately hard times, the Continental pointing breeds were new and unproven, and the practice of hunting grouse with flushing dogs had gained so little traction that Foster ignored it.

Today, that’s all changed. Flushing dogs now enjoy a large and enthusiastic following, the Continental breeds are an established force, and the Irishman and the Gordon have made heroic comebacks. It isn’t that the lights of the pointer and the English setter have dimmed; it’s just that they are no longer the only stars in the sky.

William Harnden Foster wouldn’t know what to make of it.

To be sure that you do when it comes time to choose your next pup, here, in no particular order, are snapshots of the top 10 breeds for ruffed-grouse hunting, 21st century style.

This breed remains the classic choice for traditional-minded grouse hunters—although the words “English setter grouse dog” can connote very different animals depending on who’s listening. There are low-to-the-ground, wispily feathered 35-pound English setters that smoke through the woods like missiles, and tall, extravagantly coated 70-pounders who go about their business with the unhurried formality of Downton Abbey butlers. The former are generally known as the field-trial type, the latter as the Ryman/Old Hemlock type. The legendary Tom Prawdzik of Clare, Michigan, believed that an English setter somewhere between those extremes—wide-ranging, but with an easy, all-day gait—was the most “efficient” dog for ruffed grouse hunting. He had 50 years of meticulously kept records to back up that opinion too.

Perhaps the handsomest of all the sporting breeds, the “black-and-tan” gets its name from the fourth Duke of Gordon, the Scottish laird who stabilized the breed’s type in the early 19th century. A steady, level-headed worker who operates at close range and rarely screws up, the Gordon was a great favorite among market hunters—about the best recommendation possible if your aim is to put birds in the bag. But for many years, as bird-dog fashion changed and the Gordon’s breeding was increasingly co-opted by the show crowd (the same fate that befell the Irish setter), sportsmen who’d have loved to hunt grouse with a Gordon had a devil of a time finding one that could hunt. Thankfully, the hunting Gordon is back, and while you won’t find one behind every bush, they’re out there if you make the effort to look.

No breed elicits stronger opinions than the pointer. As the saying goes, there are really just two kinds of bird-dog people: those who think pointers are the only dogs worth feeding, and those who are scared to death of them. The way I look at it, the pointer is the Formula One racecar of the pointing-dog set: capable of jaw-dropping performance in the hands of those who know what they’re doing, and a wreck waiting to happen in the hands of those who don’t. Both Burton Spiller and William Harnden Foster, two of the most hallowed figures in the lore and literature of grouse hunting, were diehard pointer men. The greatest pointer man of all, Robert G. Wehle of Elhew Kennels fame, was a grouse hunter, and it’s no coincidence that the overwhelming majority of pointers used to chase ruffs boast a preponderance of Elhew blood.

Here’s the deal: The folks who refer to their dogs as Drahthaars insist that they’re a completely separate breed and vehemently object to them being lumped with German wirehairs. The German wirehair people, on the other hand, will tell you that it’s all a matter of semantics. Me, I just call them both the Bearded Ones and try not to confuse them with ZZ Top. I’ve hunted grouse successfully and even memorably over dogs of both descriptions. They hunt hard but handle easily, and the tenacity they bring to bear at finding dead and crippled birds is, in my experience, unmatched among the pointing breeds. I’ve also found that the Drahthaar type can get a little owly around other dogs and possessive about “their” birds, so that’s something you need to be aware of if you find yourself hunting with one.

A hunting buddy of mine offered the best summation of the German shorthaired pointer that I’ve ever heard: “Owning a good German shorthair is like owning a reliable car,” he said. “No matter how long it sits in the garage, when you turn the key it starts right up.” Low maintenance is only one of the breed’s selling points, though. In pretty much every respect you can think of, the shorthair strikes a happy medium. It’s not the fastest dog, but it’s not the slowest; it’s not the widest-ranging, but it’s not the closest-working; it’s not the flashiest, but it’s not the most methodical. GSPs are typically tough, birdy, biddable, heat-tolerant, and strongly inclined to retrieve—all of which makes for an attractive package whether you’re hunting grouse or any other upland gamebird. But for your sake and the dog’s, don’t let your GSP sit in the garage for too long.

Touting the Lab’s utility in the field is like touting the therapeutic effects of regular exercise. You feel a little silly even going there, knowing that you’re stating the obvious and that whatever you say is not only redundant but in all likelihood unnecessary. The bottom line, though, is that with the possible exception of bobwhite quail in the piney woods of Georgia or the plains of Texas, there isn’t a gamebird in North America that can’t be hunted effectively, successfully, and enjoyably with a well-trained Lab. This very much includes ruffed grouse. As Robert F. Jones, a Lab man and grouse hunter to the core, wrote in his classic Upland Passage, “There’s a kind of existential rhythm to pounding along fast behind your dog, seeing him get birdy, tail going like mad, then having him check back to make sure you’re ready before he plunges in to flush the bird.” That’s the stuff grouse-hunting dreams are made of.

The grouse faltered at my shot and, clearly just fringed, glided down. Still, I was hopeful that Sidney, my friend Erik Forsgren’s female golden retriever, would work her magic. But just as she struck scent and wheeled, the grouse fluttered up and, flying too low for any of us to hazard a shot, vanished into the depths of the cover—a cover that, somewhat forebodingly, we called The Land of the Lost. I was resigned to the fact that the grouse was lost, but then, some minutes later, Erik’s chainsaw voice came buzzing through the popples. “Sidney’s got your grouse,” he said, as if he never doubted that outcome for a second. Once again, grouse-hunting victory was snatched from the jaws of grouse-hunting defeat, and it was all due to a golden retriever who knew her business. You might want to file that away for future reference.

This hunting business is supposed to be exciting—and there’s no more exciting dog to hunt grouse over, flusher or pointer, than an English cocker. I’m not even going to pretend to be objective: I love these little guys. Hunting over cockers is so much fun you find yourself looking over your shoulder to see if the cops are coming. Someone called them “pocket rockets,” and trust me when I tell you that that’s spot on. They’re dynamos, perpetual-motion machines. When they catch a whiff of scent and shift into overdrive, you half-expect parts of them to shear off. A cocker will test you—they can be willful little cusses—but if you’re firm, patient, and consistent in your training, you’ll end up with a dog that’ll put a spring in your step, and grouse in your bag, for seasons to come.

Flashier than the Lab or golden and more ruggedly versatile than the cocker, the English springer spaniel is the quintessential flushing dog. Originally brought to these shores in the 1920s as a pheasant specialist, it was the first flushing breed to catch on in a big way with grouse hunters. In 1964, when his The Hunting Dogs of America was published, author Jeff Griffen observed: “I have always said that my idea of a sportsman is a man who hunts grouse with a 20-gauge shotgun and a springer spaniel.” While the springer’s popularity has eroded some in recent years—the cocker, in particular, has eaten into its “market share”—it remains a terrific choice not only for grouse hunting but for all kinds of upland work and light- to medium-duty waterfowling as well.

I get such a kick out of the idea that the Brittany was historically the preferred four-legged companion of French poachers. In addition to the obvious fact that the Britt could be relied on to point and retrieve small game of every description, furred or feathered, it had the added virtue of looking like a roly-poly lap dog and tending not to arouse the wardens’ suspicion. Plus, if a poacher found himself in a tight spot, he could simply tuck his little spotted pal under his arm and make a run for it. While portability is rarely cited these days as one of the breed’s selling points, the Brittany still boasts plenty of qualities that recommend it to the grouse hunter. In the words of Mark Nissen, the proprietor of Wisconsin-based Classic Bird Hunts guide service, “Brittanys are intelligent, they’re easy to train, and their natural instincts are so strong that the younger dogs learn from the older dogs. They’re high-energy but low-maintenance, very affectionate, and they love having a job to do.”