Dying to hook into a heavyweight brown? Here’s where to start 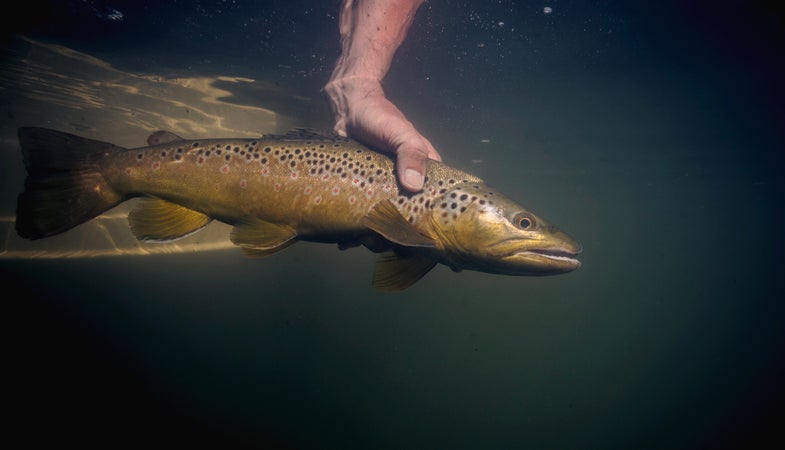 Try below Bull Shoals Dam for a chance at a freak.. Tim Romano
SHARE

Massive brown trout are like Sasquatch or the Chupacabra; you hear about them all the time, but few people have actually seen one. Sure, nearly every piece of decent trout water holds a few big browns, but they’re tough to catch. They eat at night and sulk in the shadows until they feel safe enough to come out—which is almost never. To up your odds of catching one of these beasts, visit one of these hotspots where huge numbers of monster browns are known to roam.

The Colorado River flows from high in the Rocky Mountain National Park to the confluence of the Gunnison, just east of the Utah border. From there, it picks up steam and makes its way to the desert Southwest. Before the border crossing, though, there are innumerable floats and walk-in access points where you can fish productive water. This stretch of the Colorado isn’t known for fat browns, but don’t be fooled: if you sling enough streamers and mouse flies, you’ll eventually hook a slab.

The A and B Sections of the Green River, below the tiny hamlet of Dutch John, Utah, and the Flaming Gorge Dam, generate most of the press for this famous fishery. And, sure, the fact that those sections are loaded with nearly 10,000 fish per mile and have absolutely stunning scenery makes them hard to skip. But it’s the C Section that holds the really, really big fish. Though it has fewer fish per mile by a long shot, if you’re looking for a trophy brown, that’s the place to go.

If you can handle frigid temps and the occasional elbow rub with another angler, hit the west coast of New York State between Eighteen Mile Creek and the Salmon River during the fall and winter runs of brown trout. Trout—many in the 20-pound range—run out of the lake to follow the salmon and spawn. Catching 8- to 10-pounders is commonplace, which, if you ask me, still makes for a heck of a day on the water.

The North Platte River flows out of Colorado and through Northgate Canyon and the impoundments of the Seminole, Pathfinder, and Alcova Reservoirs. As it makes its way through Casper, Wyo., any stretch of water, private or public, affords a chance to land an overfed brown. The 5½-mile stretch known as the Miracle Mile is also just a short drive from Casper—yes, it can get crowded; yes, it has big fish. But no matter which piece of water you hit, be sure to swing by the Ugly Bug in Casper.

The White River transforms from a tiny mountain stream into a massive piece of water by the time it enters the Mississippi River, some 720 miles downstream from its source. Between the two points is a series of dams that have turned the river’s once-turbid warm waters into a thriving trout fishery. Below Bull Shoals Dam, anglers have landed browns north of 30 pounds, but even on a normal day, it’s not out of the question to net an 11- to 20-pound fish, and 5- to 10-pounders are a regular occurrence.

Fishing along the banks of the Rio Grande River in southern Argentina can seem like a cruel joke at times. Winds regularly howl at 30, 40, and 50 miles per hour—so you better be able to really punch a fly. But the thing is, you won’t care about having to deal with the weather when you start fishing for sea-run brown trout that top out at 30 pounds.

East of Missoula and north of Helena sits the tiny town of Craig, Mont., home to one of the most productive big-brown-trout factories in the country. The section of the Missouri below Holter Lake and all the way to the town of Cascade also produces jumbo browns and rainbows. You might have to brave some competition, but there’s enough water to go around. The dry-fly fishing is especially great—owing to the caddis and mayfly hatches—and runs from April all the way through November.

The Gunnison River, in southwestern Colorado, is as varied as the landscapes it flows through. As the river makes its way north to meet the Colorado, it passes through some of the deepest and most narrow canyons in the country, and flat, lazy pastureland alike. Opportunities for a big trout abound, and the river can be both floated and waded effectively. The Gunnison has a ton of public-access points to boot.

If you’re a full-blown trout nut, you owe it to yourself to visit New Zealand at some point in your life. The country is home to some of the most intense, visually stimulating, and technical sight fishing for brown trout on the planet. You might not see a ton of fish, but the ones you do will be some of the biggest trout you’ve ever come across.

This Yampa is a sleeper. Trust me, you won’t hear it come up when talking about stellar brown trout spots. But the wade fishing in and around Steamboat Springs can be tremendous year-round, so can the long public floats west of town during the summer. Twenty-inch fish are nothing particularly special, and there aren’t a lot of places you can say that about.

Brown trout aren’t native to Chile, but they might as well be, since tiny high-alpine creeks and big, roily rivers—like the Baker—hold them. Fishing in Patagonia feels as though you’ve went back in time and visited Montana 100 years ago—but with temperate rainforests and other-worldly topography. Best of all, the chance to hook a truly large brown trout is often just casts away.