10 Common Flyfishing Mistakes (and How to Fix Them) 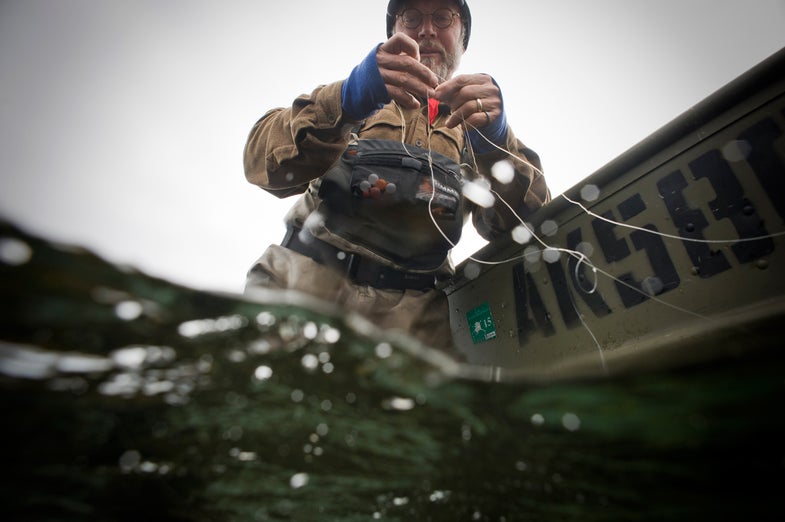 Sure, everyone makes mistakes. But the fly anglers who make the fewest land the most fish. Watching out for these 10 easily correctable but all-too-common problems will have you hooking up more than all your friends.

1. False Casting Too Much

Every fly angler is occasionally guilty of this one. That said, if you can limit yourself to one or two false casts, you’ll spook fewer fish; have a more accurate, farther-reaching cast; and get your fly in the face of hungry fish more quickly. The key to minimizing false casts is to let the rod fully load on your backcasts, which will increase line speed and shoot your fly forward.

Slow down, and watch the water from a distance before fishing it. Ask yourself: Are there fish rising, cruising the bank, or eating in the middle of the stream? I’d say half the time I walk up on a piece of water, I could have caught a fish right there had I taken my time and fished back from the bank. In other words, move slowly and observe the next piece of water before you wade through it.

This is unsexy but essential advice: Learn your knots. Strong, well-tied, properly dressed knots will save you the heartache of losing a trophy from a connection coming loose. Before your next trip, sit down the night before, read some knot guides, and practice. If you don’t, then no complaining when a big one breaks off. If you can get the improved clinch knot and the surgeon’s knot down cold, you’ll be in business for almost any flyfishing scenario. Then, up your game by mastering the San Diego jam and the Yucatan knot.

Most fish hang out in small sections of water. Learn where those few spots are in any given river or lake, and you’ll land far more fish than you would have otherwise. Identifying these hotspots takes practice, though. Polarized sunglasses are essential: Try to read the water, and carefully scan for fish. You’ll begin to notice where fish hang out at different times of day, in different seasons. In the summer, say, trout may favor a deep pool on bright afternoons, while they might move up to a rifle to actively feed at dusk.

When starting out, most folks wait too long to mend their line once it hits the water, necessitating another mend seconds later, and then maybe another. To prevent this, mend well the first time: Quickly lift the line off the water, in a vertical motion, with the rod tip held high. Then, sweep the line either upstream or down, being careful not to disturb the leader. A good mend will improve your fly’s presentation and keep you in the strike zone longer.

Knowing what fish are eating is an essential flyfishing skill. If you’re after trout, get to know your stoneflies, midges, caddisflies, and mayflies, and the lifecycles of each. Dial into which insects are active at different times of year. For bass and saltwater fish, a similar principle applies: Identify forage species and baitfish, and note how they react to tides, water temperature, and wind patterns. Field & Stream has guides to point you in the right direction: summer patterns, cold-weather patterns, fall patterns.

Inevitably, fly anglers must deal with a big ol’ pile of line, whether it’s at their feet, in the river, or on the boat deck. Negotiating this line can be tough at first, and can lead to a number of disasters, including lost fish. A stripping basket can make a huge difference by keeping line from knotting. If you’re short on cash, you can even rig an impromptu basket out of household objects (see above photo).

Many anglers set the hook by lifting their rod straight up. This approach can certainly hook fish, but many times it’ll yank the fly out of the fish’s mouth, and into the air, before the fish has had a chance to bite down. Instead, lightly pull back on the slack line and tilt the rod sideways, giving the fish ample opportunity to eat, and even to come back for a second try, if need be.

Anglers accustomed to trout tend to miss their first couple of saltwater fish because of poor hook sets. Though pulling back and setting sideways works for trout (see #8) it won’t often hook bony-jawed fish, like tarpon, barracuda, and redfish. Try the strip strike instead. Keep the rod tip pointed at the fly, and simply strip the fly line back as the fish eats. Be sure to maintain constant pressure on the line with your rod hand as you strip until you’re sure the fly is set.

10. Taking Too Long to Land Fish

Being able to quickly bring a fish to hand depends on the type and size of the fish, water conditions, and the tackle you’re using. But if you can manage a speedy landing, it’ll greatly improve the fish’s chances of survival. Though fishing with feather-light tackle can be fun, for short battles, use rods and reels matched for the species you’re after. Also, keep your hand low on the rod during the fight, for this reduces the pressure applied to the fish. (Plus, a high hold can break rods.) And though it’s fun to hear the reel scream, turning up the drag and learning how to quickly steer in a fish will leave it less exhausted and vulnerable once released.