10 Killer Gifts for the “Jaws” Fanatic

The Quint, Brody, and Hooper fans in your life will have a heart attack when they see what you brung’em 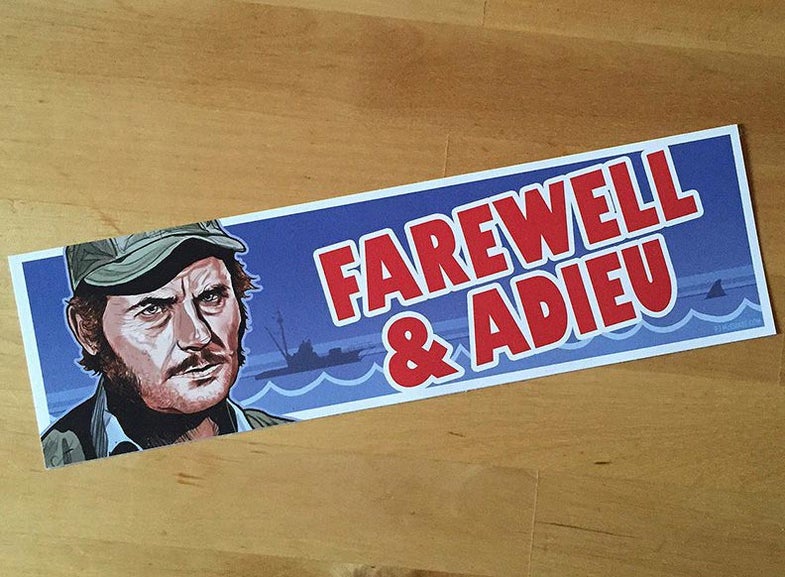 The first time I ever saw Captain Quint spit blood as he screamed his final scream, I was probably 8 years old. Shame on my parents, I know, but I was hooked on “Jaws” for life from that moment on. It is, in my opinion, the greatest fishing-related movie of all time. “A River Runs Through It” was cool and all, but the Maclean brothers didn’t have harpoon rifles, or 16/0 Penn Senators spooled with piano wire, or the Orca. Since my early days of fandom, I’ve had some form of “Jaws” memorable close by. It started with a poster in my bedroom. Now, as I write this, there is a “Jaws” light switch cover in my office and a Quint action figure on my shelf. If you’re as “Jaws” obsessed as I am—or need to shop for someone like me that can recite every line—here are my picks, ranked from 10 to 1, for coolest “Jaws” merchandise on the Internet right now.

10. Brooklyn-based artist PJ McQuade specializes in painting iconic characters from countless films we all know and love, and he gives “Jaws” plenty of attention. While he produces everything from greeting cards to Christmas ornaments featuring Brody, Quint, and Hooper, his “Farewell & Adieu” bumper sticker is one of my favorites. It’s just as at home on a boat transom as it is on the minivan bumper.

9. I color with my kids all the time. It’s fun, but a man can only work on Disney Princesses and My Little Ponies for so long. Am I right? Here’s the fix. Now if Crayola would only make “blood red” and a “chum brown.”

8. To my eye, these birch signs—all hand painted to order—are as close to the one seen in the movie as you can get. They’re not as big, measuring only 10 inches high by 12 inches wide, but it’s a nice home accent piece nonetheless. Whoever is making these must be letting Polly do the printing.

7. There’s a strong possibility that the first copy of “Jaws” you ever owned was on VHS. I still have my first tape, though my last working VCR bit the dust years ago. For all you retro-tech lovers out there, here’s an awesome throwback desk or night table lamp. Set the mood—and maybe mess with the tracking (if you didn’t get that joke, go search for a historical documentary about VHS tapes on Netflix).

6. I really like this patch because it’s a subtle nod to your “Jaws” obsession. Sew this on your vest, or chest pack, or boat bag and it probably won’t get noticed often. However, at some point, another “Jaws” freak will catch it, and you’ll share a moment and maybe even make a new friend. Besides, the only time we ever see this patch in the movie is on deputy Len Hendricks’ jacket, and I always thought his role was more important than it was credited for.

5. I’m not much of a beach guy unless I’m surf fishing on that beach. I’d rather be hung up by my Buster Browns than wallow in sand all day. But if I’m forced, I guess I wouldn’t mind laying on this perfectly accurate representation of the graffiti-tagged billboard welcoming folks to Amity.

4. There are much more detailed models of the Orca out there. Most of them will also cost you a pretty penny, especially the one-of-a-kinds. If you’re just dying to have Quint’s sled sitting on your mantel, though, for $100, this replica isn’t too shabby. It nails details like the shark jaws on the bridge, the barrels, and that famous pulpit. Pick up some “Jaws” action figures to go with it, and you’ve got game.

3. In one of the more famous “Jaws” scenes, Ellen Brody is leafing through a shark book when she sees artist Paul Calle’s piece titled “Cape Breton Boat Stalker.” It’s this painting that prompts her to yell at her son, Michael Brody, to get out of his sailboat that’s tied to the family’s dock. True story: I have been hunting down a print of “Cape Breton Boat Stalker” for many years, and haven’t been able to find it despite being able to track down several other Calle prints. While this mini 7.5-inch by 7.5-inch print from The Teeny Tiny Canvas Co. is not exactly what I had in mind, it might just have to do.

2. Though I’m not entirely sure I’d have the guts to rock these custom-painted Vans, I certainly appreciate the marriage of classic skate shoes and “Jaws.” The blood spatter on the heel is a nice touch. It’s the handy work of artist Ricky Merino of RMCustomkicks.

Read Next: Herpes Carp And The “Jaws” Mash-Up Of The Century

1. Hands down, this is the most accurate representation of Quint’s fishing cap I’ve ever seen. It’s just about perfect, right down to the front pockets and color. Made from waxed cotton just like Quint’s, Stockbridge Sewing Works crafted this hat to last, although it comes with a slightly “weathered” look in case you don’t get the chance to beat on it quite as much as a hard-working, full-time, scruffy shark killer.