A 10-Step Guide to Killing a Great Public-Land Buck

No private whitetail para­dise of your own? Take heart. If you’re a bowhunter, you can have uncrowded, high-quality deer hunting on Uncle Sam’s ground. But you need a system. Here it is 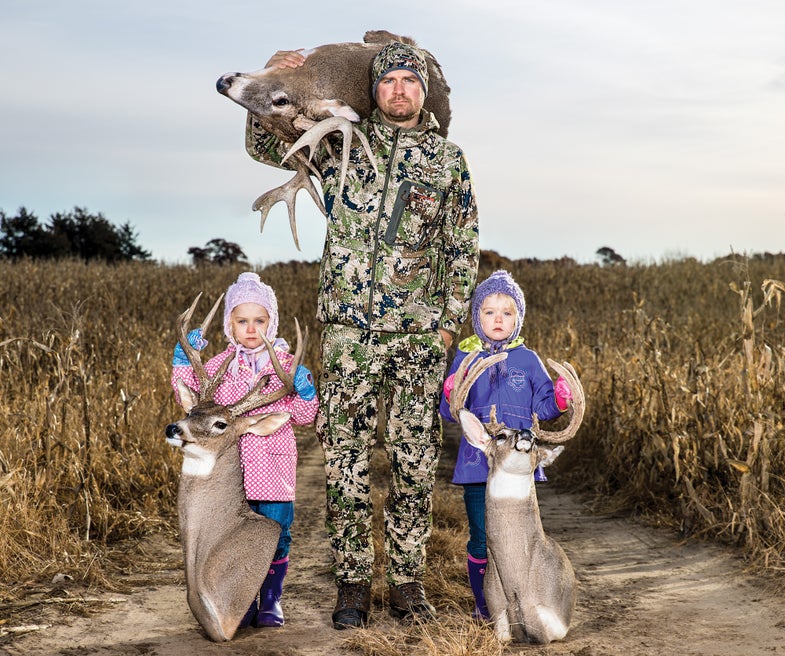 First, for states within reasonable driving distance, check DNR websites to find out which offer over-the-counter nonresident whitetail buck tags. Most do. This should take about five minutes on your smartphone. (Skip this if you just want to hunt your home state.) Next, compile maps that show public access for your chosen states. Ten years ago, this meant a pile of paper maps. Now you can just download electronic versions from DNR sites, or even better, buy a subscription to a service like OnXMaps Hunt, which shows public-private boundaries and is always available for quick reference via a smartphone app.

Step 2: Get Away From It All

Identify the largest cities on your maps and work away from them. More people equals more hunters, and that’s no good. You want to be a good hour away from metropolitan areas, and nearly that far from midsize cities, too. Ideally, the nearest town to your hunting spot should have only a couple of gas stations, a diner, and maybe a roadside motel.

Look at your remaining options, and start a process of elimination based on:

By now you’ve probably narrowed it down to a few promising rural areas in a given state. Pull them up on Google Earth and look for water. I’ve arrowed mature bucks on public land in North Dakota, South Dakota, Wisconsin, and Nebraska in the last few years, and every one of them died within sight of (or actually in) a river, stream, or pond. Whitetails gravitate to water, and public land with moving water usually has prime cover, too.

Just as important, water provides a much-needed starting point for both scouting and hunting. If I’m down to a handful of choices, I’ll always pick the one with good water.

When will you hunt and for how long? The overall goal is to hunt when and where others won’t, so consider off-peak times, such as the early season or the lull. (If you want to hunt with a gun, consider a late-season muzzleloader trip. These post-rifle-season hunts draw a much thinner crowd and offer good opportunities for ­public-​land success.) If you can, avoid weekends altogether. Before I had kids, my travel hunts lasted seven to 10 days, which gave me plenty of time to figure things out. Now, they average four or five, which I’d say is a minimum for consistent success with a bow.

Also double-check state DNR sites with an eye out for other season openers or nonresident restrictions that could ruin your plans. While you’re at it, make sure you learn the rules and regs for your specific area. Trust me, they won’t be the same as in your home state.

If at all possible, go to your spot, lace up your boots, and get out there. Your main goal is simply to verify that the place is worthwhile. No matter how good it looks on satellite imagery, some public land is just a game desert: too much pressure, not enough cover, no nearby food sources, you name it. If the physical sign isn’t there in the form of tracks, trails, rubs, and scrapes, forget it and move on to Plan B.

But if you do see good sign, or spot deer, you can buy your license with confidence. If traveling to scout on foot isn’t in the cards, spend even more time digitally dissecting the property.

Step 7: Scout All Out

When your trip starts, if you’re on a road hunt, give yourself at least one full day to scout and hang stands. And scout hard. Your goal is not to find good spots; it is to find those few, magical, hidden hubs where your odds soar. If you are not saying to yourself, “Hot damn, this is the place,” then move on. Start at the water and cover as much ground as you can, looking for that pond bank stampeded with deer tracks, that cattle-path-like stream crossing, or that killer rub line. (You should have the same attitude closer to home, where you have more time to home in on the X.)

This kind of hunting is tough. At the risk of going full hippie—minus the b.o. and jam bands—I’ll say this: Attitude matters. A lot. Failure is inevitable. It will, in fact, be the outcome of nearly all of your daily hunts. The question is whether you can stay positive and eager enough to turn consistent failure into a moment of pure triumph. That’s bowhunting, in general, and especially on public land. It’s not easy, but the reward is worth it.

Step 10: Appreciate What You’ve Got

Very few people in your life actually care about the size of the deer you shoot, so target what makes you happy—and what is available to you. I’ll set my sights on a Pope and Young–class buck in certain states, but in others I simply hunt bucks. Any bucks. And I’m damn happy when I see a forky walking down the trail toward me.

The dream of a private whitetail paradise has taken over modern hunting—and left many of us dwelling on what we don’t have. It’s probably fun to raise bucks from fawns to 61⁄2-year-old “shooters” and opt to take them when they are at peak maturity. But let’s face it: That’s not in the cards for the majority of deer hunters. What is in the cards, what’s available to every one of us, is the opportunity to arrow a buck or even a doe that will make us just as happy (if we get our heads right) on millions of acres that we all own.

A few days of crappy sleep is enough to turn any road hunt into a form of torture. You have to have a comfortable camp, or you will be too miserable and tired to focus on scouting and hunting. That means a four-man tent per person, and quality cots, sleeping pads, bags, and pillows. Good camp food goes a long way toward making a hunt enjoyable, too. —T.J.P.

I bring a skinning knife, fillet knife, boning knife, and sharpener on every trip. Pair them with an extra-large cutting board and 1-­gallon zip-seal bags, and you can butcher deer on the campsite picnic table or on the truck tailgate in a motel parking lot. I also bring high-end coolers. If you tag out early, you might need to keep meat cold for days. —T.J.P.

Tip: Sure, it’s a bit obsessive-­compulsive, I know, but you’ve got to know where all of your gear is at all times. When you hunt with a guy like Dave Hurteau, this becomes even more important because his upstairs is more cluttered than a hoarder’s living room. Put your release aid in the same pocket of your pants every time you hunt. Ditto for your tow rope, headlamp, calls, etc. Extend this strategy to your camp and truck. —T.J.P.