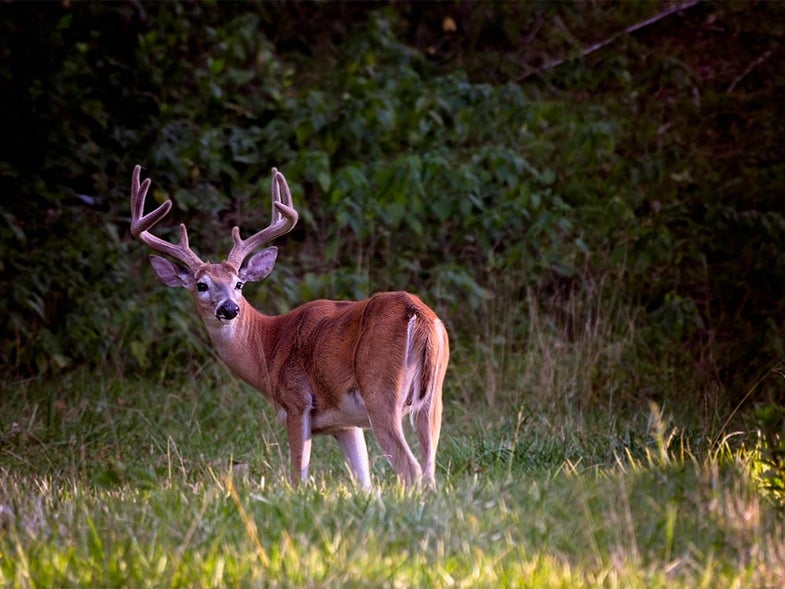 A big velvet 8-pointer steps out for an evening bite. Sandy Potere/Alamy
SHARE

The absolute best time to tag a mature buck that you’ve identified and located is right now, during the early season. Sure, you’ll see more deer during November’s rut, but if you know where a particular buck hangs out, the early season can’t be beat. Not only is your buck reasonably predictable, but he’s also sticking to a fairly small core area, and human hunters have been off his radar for months. Here are ten tips for putting him on the wall. 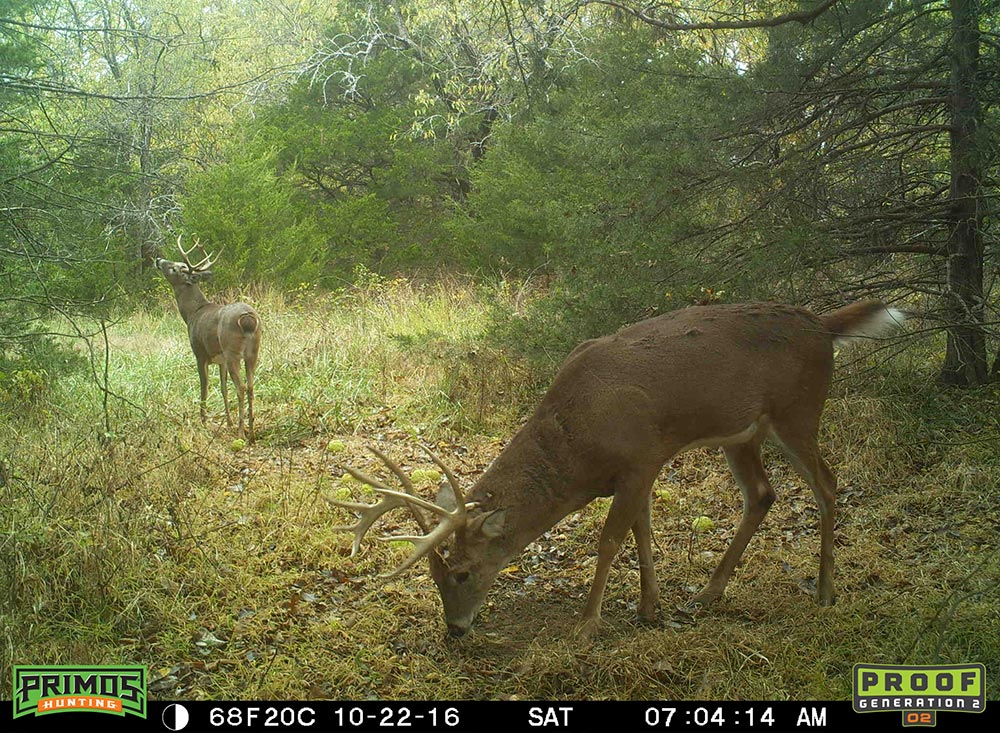 A pair of early-season bucks work a scrape line.

If you still think scrapes are only a rut thing, get with the program. Whitetails use scrapes year-round, and things really ramp up after bucks shed velvet. Make mock scrapes now, both for your camera setups and to sweeten the deal near your best stand sites. Killer tip: Hang a 10-inch chunk of hemp or nylon rope from the licking branch, dip the frayed end in scent, and watch your mock go from ho-hum to on fire in a few days.

2. Watch The Weather And Hunt When it Gets Cold

You know that weather and temperature can dictate deer movement, but this is especially true right now. Whitetails are losing the coat that kept them comfy at 90 degrees, and swapping it for one that will help them survive sub-zero temperatures. So when temps feel summery, bucks lie on their bellies until the thermometer swings the other way. Watch the forecast, and when the mercury is going to drop, get out there.

3. Get In The Field And Glass for Big Early-Season Bucks 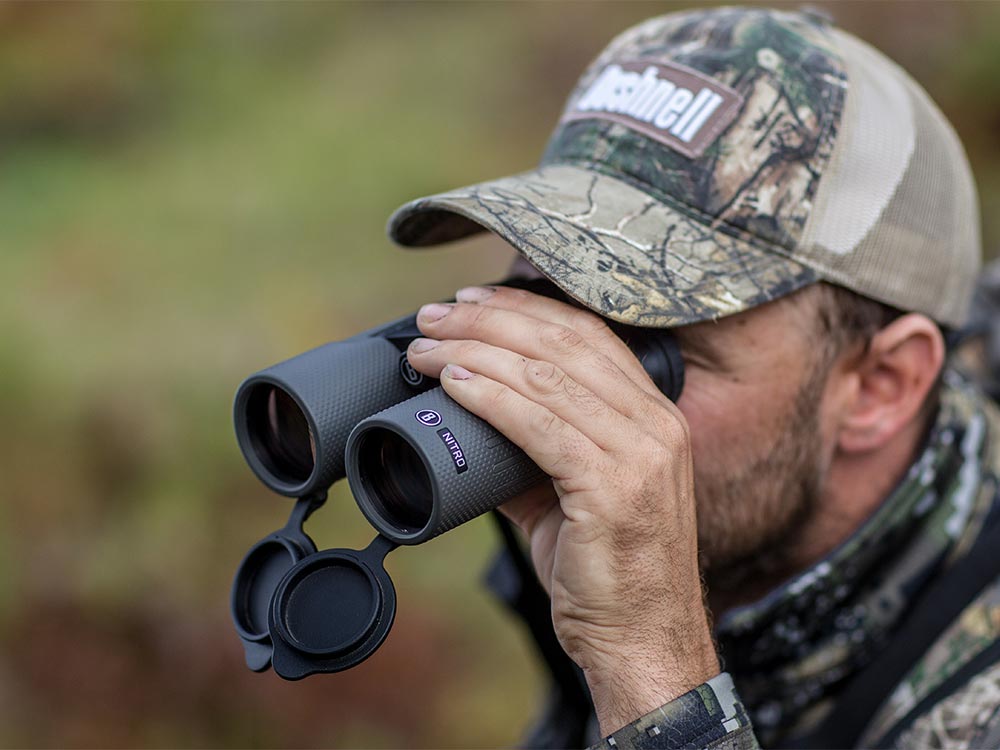 It’s not enough to look at trail-cam pics; you need to get out and glass.

There’s always a little shakeup in buck location right now. Bachelor groups break up, food sources shift, and core areas are re-adjusted. Cameras can catch some of the movements bucks make in response, but for real-time updates, nothing beats pressing your face to a spotting scope or binocular. Get out there and glass the edges of major food sources (alfalfa and soybeans in farm country, clearcuts in the big woods) the last hour or two of the day to get the most recent intel on a dandy.

4. Scout For Deer During the Acorn Drop 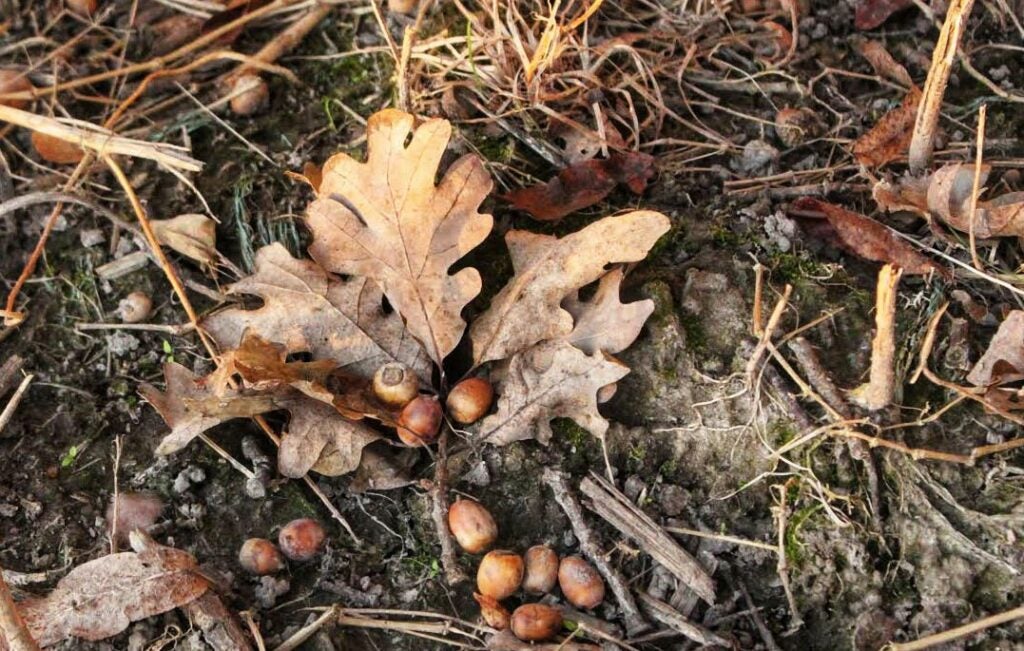 We tend to get a little obsessed with our food plots because, after all, we planted them. But while deer appreciate our efforts, they’re not married to rye, wheat, or brassicas—especially when mast crops start falling. The early season is prime time for the white-oak acorn drop, as well as for soft-mast treats like persimmons and apples. So lace up your boots, and (while avoiding known bedding areas) go find what deer are eating in the woods.

5. Keep Your Early-Season Deer Stand Mobile And Set Up On Fresh Sign

With the deer herd in constant flux now, having a mobile and flexible hunting strategy is key. Ladder stands and box blinds may be the ticket if you’re sitting over a funnel during the rut or on a food plot in the late season, but the only way to zero in on the food source of the moment is to grab some climbing sticks (or steps) and a lightweight hang-on stand (or climber) and set up on the hot sign.

6. Small Rubs Can Lead to Big Early-Season Bucks—Don’t Ignore Them 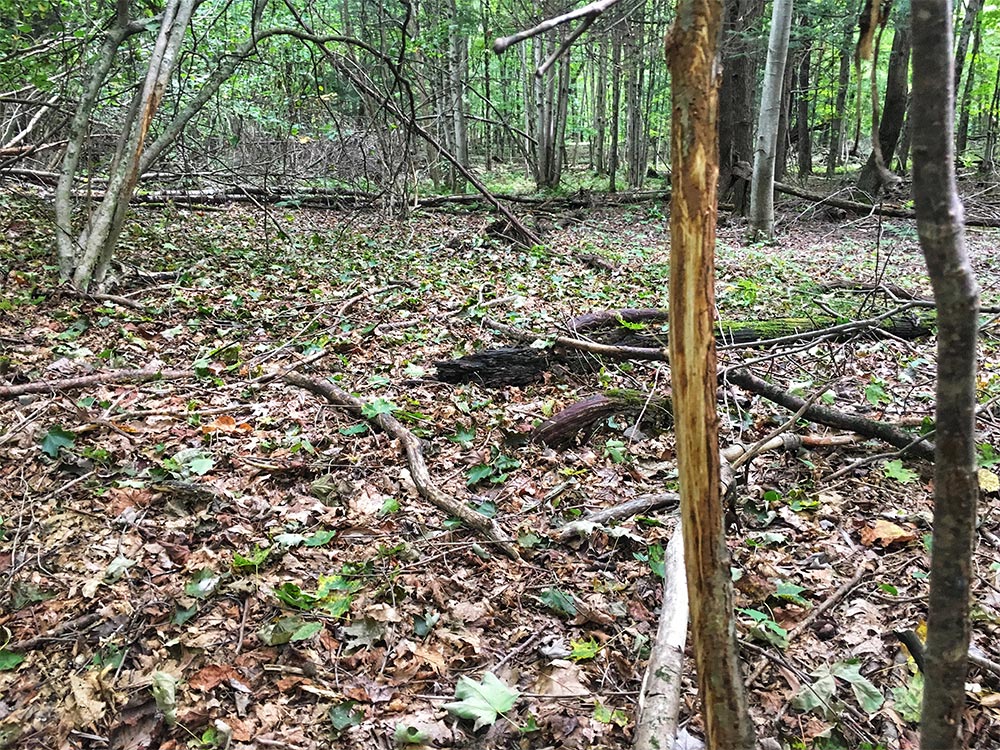 Even big bucks make small rubs like this in the early season.

Forget the shredded telephone poles of late October. (Well OK, if you find one go ahead and get excited.) But what you’re really looking for now are rubs that look like they were made by Rudolph, not Godzilla. In the early season, even the slimmest shredding is likely the work of a dandy. Look for saplings and brush—usually near the hottest food sources—with freshly shaved bark, and you’re staring at a potential big-buck ambush site.

Water is such a powerful attractant in the warm weather of the early season that you could almost plan your hunts around H2O alone. If I’m hunting a new area this time of year, I’ll often simply find the water, speed-scout for the best sign, and sit right there. The ideal water setup, though, is a creek, natural pond, or push-up pond that’s close to both security cover and food. On warm early-season days, deer will grab a drink before heading out to feed. It’s a slam-dunk setup that will draw bucks now and well into the rut. 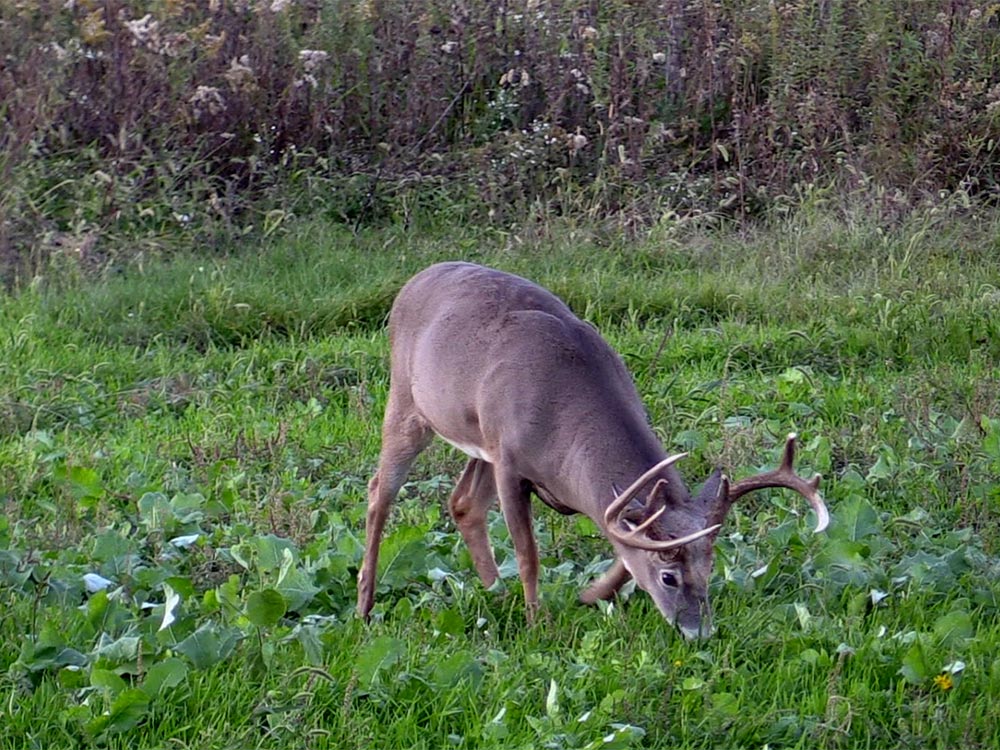 A nice 8-pointer chows down on a food plot planted in Biologic.

Yes, the One Great Truth about early-season deer food is that acorns rule. But deer eat like your kids do, gorging on one thing until they’re sick of it and then turning to something else. And in early fall, what they turn to is usually green. Think about it: Every food source in the whitetail world is drying down, and they’ve got the rest of winter to gnaw on twigs, so they go for the succulent stuff while they can, including still-green bean plants, alfalfa, wheat, rye, clover, peas, and brassicas. Even if there’s a good acorn crop, count on deer to chaw on nuts for a week, then turn their attention back to greens.

9. Hunt The Morning to Roost a Monster Buck

Most early-season hunters limit their hunts to the evening feeding pattern, but that doesn’t mean you shouldn’t get outdoors in the morning. Dawn is prime time for spotting a monster that’s slipping off a field on his way back to bed. Because early-season deer tend to bed very close to their favorite grub, there’s a great chance he’ll enter the field from the same spot in the evening. As in turkey hunting, roosted ain’t roasted, but it makes your odds of tagging the buck on your evening sit go way up.

10. Rattle In An Early-Season Buck 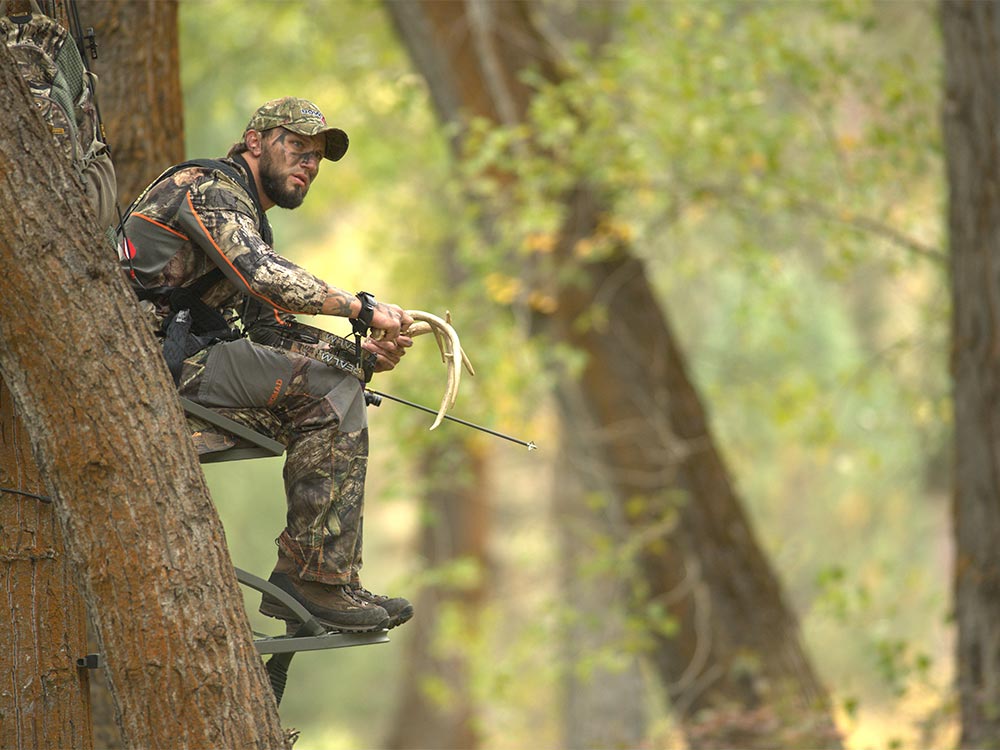 An early-season bowhunter tickles a set of ratting antlers.

Rattling horns are not just for the rut. The weeks after velvet shed feature lots of sparring and some surprisingly intense tussles as bucks re-negotiate the pecking order that was established in early summer, when antlers were soft. Don’t make the same loud ruckus you would in November, but know that some judicious tickling and light cracking can pull a curious buck into bow range now.