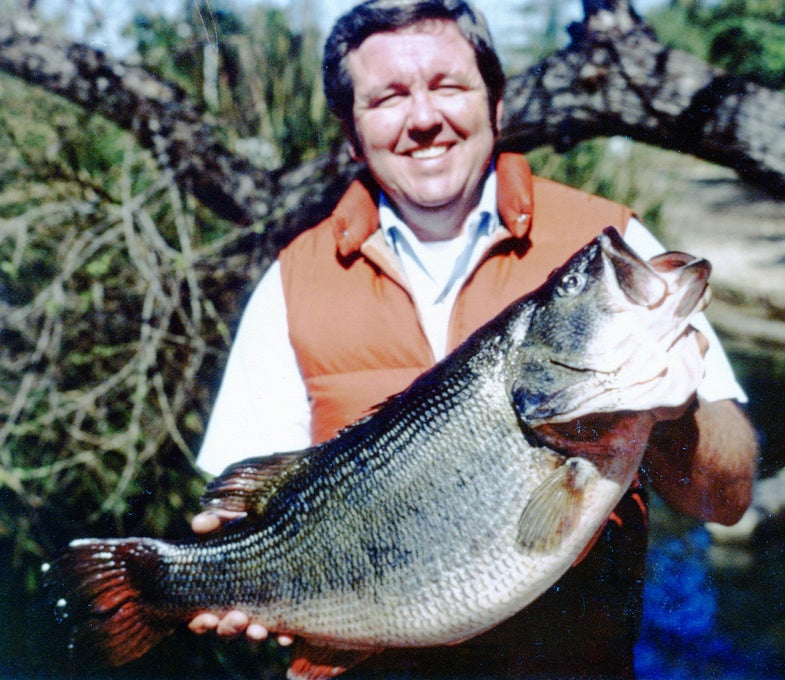 On this day 85 years ago, George Washington Perry landed the most legendary catch in recreational-fishing history: A 22-pound 4-ounce largemouth bass, from Georgia’s Montgomery Lake. In the decades since that summer day in 1932, when he hauled in the all-tackle world record—which he entered into Field & Stream‘s big-fish contest later that year—bass anglers across the world have tried to top the trophy, which no doubt remains the Holy Grail of the fishing world. But even after eight decades, and with an estimated 10 million bass fishermen in the U.S., Perry’s accomplishment has been equaled but never surpassed. All that angling has, however, produced some impressive catches. Here’s a look at a dozen of the best: The 11 biggest largemouths ever caught with a rod and reel, as listed in the International Game Fishing Association record book.

Mackenzie Hickox was only 11 years old when she set the female junior-angler record while fishing with her parents, her sister, and a friend from the shore of a man-made pond near her house. She used a Strobe Spinner to entice a strike, then measured and weighed the bass on a portable scale before releasing it.

Not much is known about McAbee’s top-10 catch, other than that he landed it after a 10-minute fight using a G. Loomis rod, a Daiwa reel, and a 6-inch artificial worm. The fish was weighed on a certified scale at a local supermarket, and it’s the men’s 6-pound-line-class record.

Larry Kurosaki used a custom-tied minnow fly on an 8-pound tippet to hook this big bass during a morning outing on Castaic Lagoon, a smaller body of water below the main reservoir of Castaic Lake, in California. It’s the biggest largemouth caught with fly tackle in the IGFA record book. Kurosaki fought the fish for five minutes before weighing it with a portable certified scale and releasing it.

Cody Pierce wasn’t exactly playing hooky when he nailed this 17-pounder, but odds are that he was a little late to class after tying into the lunker. The 14-year-old had ridden his skateboard to Murray Reservoir near San Diego to squeeze in a little bass action before school; after catching some smaller fish, he decided he had time for one more cast before calling it a morning. He weighed the fish at a local ranger station before releasing it. Scoring the male junior-angler record is a good excuse for being tardy, in our book.

A monster largemouth busting a topwater lure is the stuff that fishing dreams—and magazine covers—are made of, but there are many ways to catch a trophy bass. Crupi landed his second entry on this top-11 list while working a crippled herring jig in 40 feet of water, and it took him some time to realize exactly what he had. He’d already caught several crappies and smallmouth bass when a big fish started peeling line off his reel. The fish stayed submerged for 15 minutes before surfacing 50 yards from his boat, and 27 years later the catch still stands as the men’s 4-pound-line-class record.

Another example of the varied methods and conditions under which bass fishing can be productive: Dan Kadota’s winter lunker, taken on Castaic Lake in 1989. Kadota braved the early-morning cold to work a live crayfish along the bottom, and he had the trophy in the boat five minutes after hookup. Kadota’s bass—the men’s 10-pound-line-class record—was an early harbinger of Castaic Lake’s potential as a trophy-bass hotspot; it was the first of five largemouth records set at the southern California lake between 1989 and 1992.

Robert Crupi started his string of remarkable bass catches with this 21-pounder that, at the time, was the third largest largemouth ever certified by IGFA. A regular at Castaic Lake since 1977, Crupi had fished the same spot for five consecutive days before hooking this whopper, which hit a live crayfish in about 40 feet of water. It was—and still is—the men’s 12-pound-line-class record.

Raymond Easley was schooling less-experienced anglers on how to properly fish a live crawdad in deep water when this 21-pounder crushed his bait. If the how-to session made a deep impression on his students, it had an even more galvanizing effect on the wider bass world. The first largemouth certified at more than 20 pounds in almost 50 years, Easley’s catch—the men’s 8-pound-line-class record) was only a pound and an ounce shy of the world record. Suddenly, George Perry’s longstanding all-time mark seemed within reach.

Just a couple of months after boating a 17-pounder, and almost exactly a year after landing a 21-pounder, Robert Crupi became only the second man to haul in a largemouth bass weighing 22 pounds or more. Using a live crayfish for bait, Crupi reportedly needed only three minutes to boat the fish, and then raced to shore to weigh the potential world record at a local deli’s certified scale. He fell short of Perry’s all-time record by only 4 ounces, and would never come that close again. He caught the fish within the same 12-month period that he landed the fourth- and sixth-place largemouth records, which surely stands as one of the all-time great hot streaks in sports. Though this catch has since been bumped from second to third on the list, it remains the men’s 16-pound-line-class record.

Japanese angler Manabu Kurita shocked the fishing world in 2009 when he joined Crupi and Perry in the 22-pound club. Fishing on Lake Biwa, in central Japan, with a live bluegill, he caught the 22-pound 4.96-ounce largemouth that now shares the all-tackle record with Perry. IGFA recognized Kurita’s catch after supplementing its usual certification process with a polygraph test administered by Japanese authorities. Though the fish weighed .96 ounces more than Perry’s, IGFA regulations require that new world records weighing 25 pounds or less must weigh at least 2 ounces more than the standing record to claim the title—which is why the record remains a tie.

The granddaddy of all bass records, George W. Perry’s 1932 all-tackle record turns 85 today, June 2. The 20-year-old farmer couldn’t have known, when he decided to let his fields dry out from recent rains and spend the day fishing instead, that his catch would become the most pursued world record in freshwater fishing. He no doubt couldn’t have foreseen how the fascination with breaking the record would help fuel a multibillion-dollar industry, either; Perry and his fishing partner that day, Jack Page, shared one rod and reel between them.

RELATED: 15 World-Record Catches That May Never Be Beaten