11 Dream Trout Spots Around the World

Our resident trout bum name-checks his top flyfishing destinations, near and far 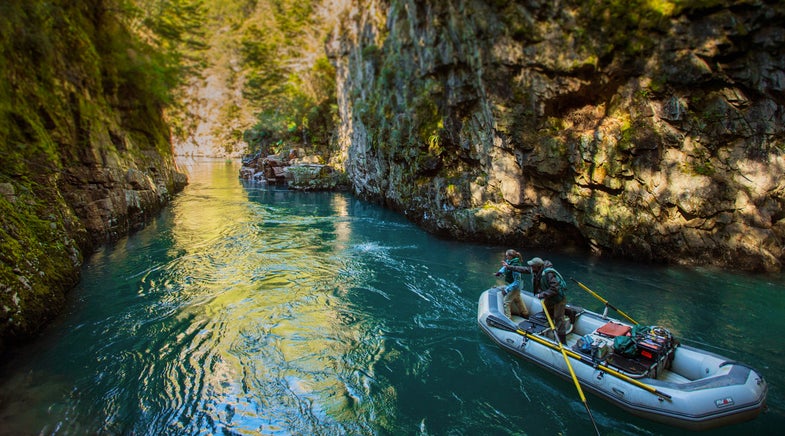 My colleagues at Field & Stream recently published their list of 20 dream trips for the ultimate big-game adventure. Though I love to hunt, I’m more of a fisherman, so I thought I’d weigh in on my dream destinations for those more interested in wetting a line than stalking a mule deer. Sure, some of these trout honey holes will cost you some serious change to reach, but if you are determined to fish some of the greatest waters in the world, here are the spots you need to hit.

It’s been said that Chilean Patagonia is like what Montana was 150 years ago, an assessment I totally agree with. It is sparsely populated country; its unpressured trout live in every little trickle of water; and the scenery looks straight out of movie set. Plus, you might see a really, really big brown trout every once in a while. The town of Coyhaique is a perfect place to start if you are considering a trip. You could go for miles and miles in every direction and find trout.

Do you like hunting big game animals? If so, that’s what trout fishing in New Zealand is like. You’ll need absolute stealth and quiet when fishing its waters, and even then you might spot only a handful of fish in a day—but there’s a solid chance that they might be the biggest trout you’ve ever seen. Then all you have to do is make the cast… While almost all of New Zealand is covered in trout, I like the areas around both Wanaka, on the southern part of the south island, as well as Murchison, on the northern part of the same island.

Think Alaska, but with far fewer people. Seriously, like half as many. Then you’ll get why so many hardcore trout anglers make a trip to Russia to strip mice patterns all day long for 20- to 30-inch rainbows. Anywhere on the Kamchatka Peninsula, in far eastern Russia, is a good bet.

So, you like trout that live a good part of their lives getting fat in the ocean, eh? Brown trout that regularly exceed 20 pounds? Well, the Rio Grande River, in southern Terra del Fuego, Argentina, is the place for you. It’s known as the most prolific sea-run brown trout fishery in the world. That said, it’s super windy and caters mostly to the two-handed-casting crowd, so make sure to brush up on your spey skills before you head down.

Canada is teeming with trout, but folks in the know go to British Columbia for their famous sea-run brethren, steelhead. For the uninitiated, a steelhead is essentially a rainbow trout that migrates back and forth to the ocean and gets super huge. These wild fish are all over B.C. and are truly special to catch.

Anywhere you can fish flesh flies for trout gets my stamp of approval. Given the huge number of salmon that come to spawn and die every year in Alaska rivers, the trout get massive thanks to the influx of biomass in the water. Not only are the rainbow trout huge, but the scenery is absolutely mind-blowing. Oh, and if the trout aren’t eating, there are about 10 other species to target in most rivers. Bristol Bay is a great place to start, but I would also recommend the Wood-Tikchik State Park, in the western part of the state.

That’s right, I said Mexico. While the fish don’t get huge, the sheer pleasure of catching trout high in the mountains of both the mainland and the Baja Peninsula make it a bucket-list trout destination. Most of these fish inhabit crystal-clear creeks that wind down from the high peaks in locales far removed from most population centers.

Most folks come to Colorado to fish the big-name trout rivers that cascade from the Rockies, forming fairly large waterways. What most fail to think about is the crazy number of high-altitude lakes full of native cutthroat that dot the hundreds of 10,000-foot peaks. The list of lakes is never-ending, and at almost every single one, you can enjoy a totally secluded day of fishing for gorgeous native trout.

Let’s just say that there’s a reason Montana and flyfishing are synonymous—the place is trout heaven. The Flathead River drainage, in particular, offers tons of options for both the wading and floating angler. Its tributaries are many, and the Southfork of the Flathead offers one of the few places in the Lower 48 where you can legally target bull trout. Getting in the river with a boat requires a mule train and some patience, but the reward is something you can do at few other places in the world.

Michigan has it all. Steelhead. “Sea-run” brown trout. Salmon. And it’s a sleeper, at least compared with many blue-ribbon Western hotspots. Thanks to the state’s plethora of rivers and close proximity to the Great Lakes, you can get most all of the action in one spot, and you don’t have to travel to the other side of the world to find more fishy water. The Pere Marquette River is a personal favorite of mine.

The Green River in Utah below Flaming Gorge Reservoir is famous for a reason. It’s an absurdly gorgeous piece of gin-clear water loaded with 22,000 fish per mile in some areas. The camping spots are hard to beat, and you can make the fishing as easy or as technical as you like, with nymph anglers doing great and the technical dry-fly fisher making hay on a good day, too.