11 of the Most Legendary Hunting Dogs Ever

There are great gun dogs. Then there are the legends whose names will never be forgotten 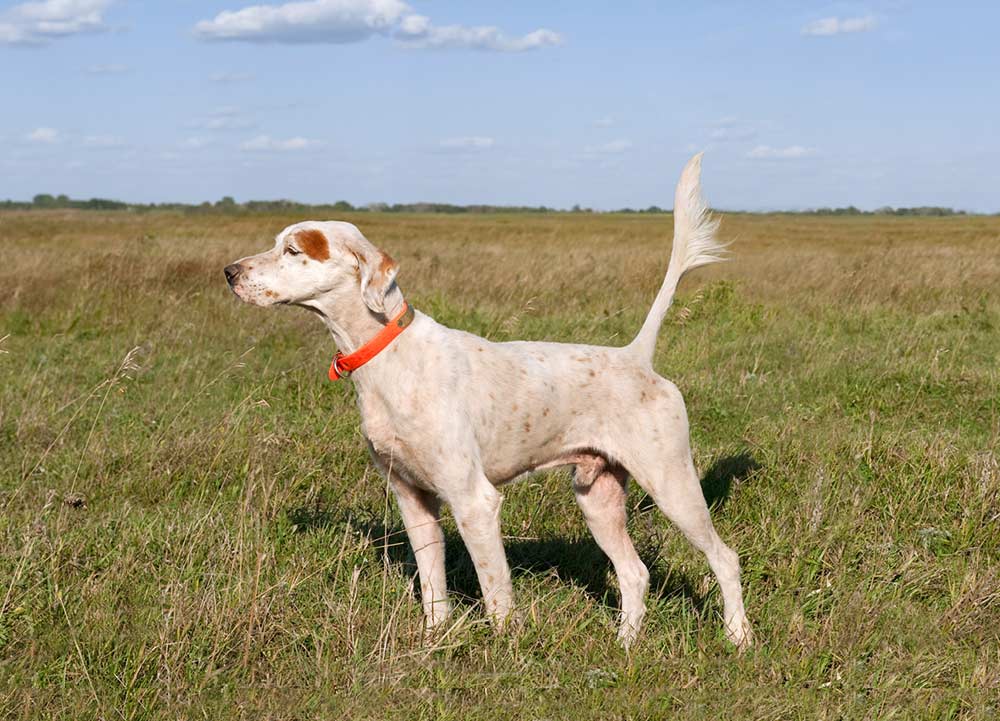 I love gun dogs, which means I wouldn’t walk a pheasant or quail field or sit in a blind without one. Dogs make every hunt. On some days they cast perfectly and handle every bird with ease. On others they plow through thick vegetation and crank out one blind retrieve after another. Those epic hunts make up for the times when they come unhinged and we cuss with the eloquence of a dockworker. But Momma didn’t raise no quitter, so we get them back on track. It’s all part of the game, and though we love our dogs best, some we’ve never met have found a place in our hearts—and gun dog history.

Tell an All-Age field trialer that a setter has a shot to win the National Championship and he’ll chuckle. Count Gladstone, a setter, won the first National in 1896, and for the next decade-plus, a setter winning the Super Bowl of bird dogs was as common as sunburn. But that was because pointers weren’t allowed to compete. Pointers were welcomed in 1909, and since then they’ve put on a clinic. Their beat down on Professor Longhair was epic; the most recent setter win at Ames Plantation was Johnny Crockett and that was in 1970—when men wore super short cut-off jean shorts and knee-high tube socks while listening to the Partridge Family sing “I Think I Love You.”

But Shadow Oak Bo came along and he was legit. He was an honest setter dog, stunningly handsome and biddable, but he had one difference. Bo ran like a pointer. Add a top shelf bird dog pit crew of Georgia’s Butch Houston and the late Dr. John Dorminy as owners, and legendary trainer/handler Robin Gates and the rest was history. Bo won the National in 2013 and returned the following year to win it again. Only two dogs in the century-plus history of the National ever won consecutive back-to-backs. His potential hat trick came in 2014, but Bo didn’t three-peat. He did go on to the luxurious life as a stud dog, though. Lounging around, eating, and breeding isn’t so bad, is it?

Things got real interesting with one recent litter. It was a Shadow Oak Bo x Gates Country Blair. The owner/breeder of the female is none other than Robin Gates’ brother John Rex Gates, the youngest inductee to the Bird Dog Hall of Fame. He and his wife Diane Deming Gates helped Mrs. Dale Bush pick out a female as a present for her husband.

But her husband Dale Bush isn’t just any bird dogger, he’s in the Bird Dog Hall of Fame, too. Bird dogs have driven Mrs. Bush crazy for over 40 years, but when she suspected his advancing age made him think of shutting down his kennel she’d have no part of it. And that’s why she got him a Gates pup. But there was something else at play, for Dale Bush is a leading expert in frozen semen used for artificial insemination. He was the visionary to secure some of Johnny Crockett’s sperm and to wait until he found a female of champion pedigree to which to breed.

It took 46 years for the right bitch to come around, and a Bo daughter was a perfect match. The breeding worked, and Dale’s pups are just over a year-old hunting and pointing Texas quail like crazy. They’ll be trialed soon, so keep your eyes on these dogs. With luck, one (if not both) will be added to this list in a few years.

Sure John Olin applied progressive-burning, smokeless powder to paper shotshells, and created the famous Super-X load. Sure he introduced shotshells in the 1960s with hulls that were made with a new material called plastic. And sure he owned Winchester firearms and manufactured many of the rifles and shotguns we use today. But his love of hunting brought about a focus on bird dogs, and as a devoted Labrador retriever man he is best known for King Buck.

Olin wanted dogs of the highest caliber, and he bred them for good looks, great noses, and intelligence. King Buck was trained by T.W. “Cotton” Pershall, and the dog won back-to-back national retriever championships in 1952 and in 1953. Buck is the only retriever to compete in 63 consecutive series of the National Championship Stake. In today’s world he’d be known as the GOAT, the greatest of all time. His successes were so significant that they earned him a feature on the 1959 Federal Waterfowl Stamp and the bragging rights of being the only dog in history to be on the stamp. His collection of certificates, silver plates and silver cups are housed at the kennels at Nilo Farms and they showcase his CH and RUCH victories.

There are pointers and there are Elhew pointers goes the saying, and Snakefoot was perhaps the pinnacle of Bob Wehle’s breeding program. Wehle’s goal was to breed a dog that could adjust to any hunting situation and naturally handle any bird. His dogs could run big just as easily as they could cover close, and no Southern bobwhite quail, New York State grouse, or Montana sharptail was safe. Wehle’s smart, tenacious, eager-to-please pointers were the envy of many, and Snakefoot was so revered for his wins that he was elected to the Field Trial Hall of Fame. Snake won as a National Shooting Dog and was the Shooting Dog of the Year. Wehle loved this classy dog with stunningly good looks and a big motor so much that he even wrote a book about him.

Talk about bird dogs and Field & Stream and you have to give a shout out to the magazine’s legendary columnist Corey Ford. That’s right, the writer behind The Lower 40 column as well as the masterpiece, The Road to Tinkhamtown. Ford was a writer first and bird hunter second, and while his brace of Cider and Tober did not win field trials, they have been immortalized through Ford’s writing. Cider’s name was coined because he, like the beverage, came to life in the fall, and Tober is short for that prime upland month of the year, October. Both setters were bred by Vermont’s Earl Twombly and are a combination of his best hunting setter, Duke of Decoverly, and show setters from both Mount Mansfield Kennels and Blue Barr Kennels’ blood lines. These dogs weighed around 75 pounds and featured coats of roan marbling, very different from the typical ticking.

Cider and Tober’s progeny live today through the hard work of Twombly’s grandson and his wife, Legh and Jenn Higgins. Their Coronation Kennels is in Northern Vermont, so if you’re a Corey Ford fan, then you can own a pup descended from that famous brace.

Thankfully the dog has an easier-to-pronounce call name, but know this: Gus is a beast. He was whelped and trained by Blue Cypress Kennels’ Callum Macgregor and is the first British lab bred in America, born in America, and trained in America to return to his native UK and win field trials. No other British lab from any other American breeder has accomplished that lofty goal. And Gus did it when he was 18-months old.

Some dogs are just made for the big screen, and Dez Young’s Llewellin setters Hank and Dash were two such pups. Born in 1992, Hank made his first film appearance on a Montana bird hunt that debuted on the Outdoor Life Network television show in 1996. Hunters followed Dez and Hank for six seasons and across the country from Alaska to Florida and all points in between. They took us on trips in our own local spots just as easily as they showed us about hunts that were on our bucket list.

Hank retired from filming, and his son Dash came on board in a new series called Dash in the Uplands. Dash made his first appearance at a young 9-months of age, and his role grew for five seasons. While many would think chronicling bird hunts from ptarmigan to woodcock to be a dream job, the filming is quite difficult. Settings, lighting, and the unpredictability of wild birds makes filming a chore, but Young and videographer Bob Corley were superb. They were so good that they won a number of awards including a staggering 19 TELLY awards.

In the Gordon setter world, dogs that win hunt tests and field trials and become show champions are crowned Dual Champions. These frequently overlooked black-and-tan setters must compete at the highest hunting levels so that they are named field trial champions. Instead of taking a break, they then need to compete in the show circuit, under a completely different set of requirements, and win.

Is it common for Gordons to hunt in a lights-out manner and they win enough stylistic points to be crowned a winner? Sure, for prior to Stetson, 43 Gordons had won Dual Championships. But here is where Stetson differs from his predecessors. Stetson was so stunningly good looking that the Scandinavia Gordon Setter Club honored him with the award for being the ideal dog of the breed. Advancing the breed is a baseline of the world of hunting dog breeding, and Stetson was selected to sire many litters in both America and in Europe. While dog breeding is never an exact science, litters with Stetson’s genetics are among the most coveted for good reason.

Who’d name a male beagle Him and a female beagle Her? The late President Lyndon Johnson, that’s who. Him and Her were whelped in June 1963, and accompanied the president on walks, in meetings and on hunts. But Johnson was called out by the American Society for the Prevention of the Cruelty to Animals when he lifted Him to his haunches to get him to bay. It didn’t matter that LBJ bayed along with his pup, the ASPCA pounced on him. The president apologized by explaining that it was common for rabbit hunters to tug a beagle’s ears to tune their voices before a hunt. Johnson bred Him to a dam and kept two beagles from that litter, and he received another beagle from FBI director J. Edgar Hoover. Johnson named that hound J. Edgar but shortened it to Edgar. Maybe the other Edgar knows where Jimmy Hoffa is buried?

Theirs is a dog’s life, it really is. Hunting hard, having fun and success, and doing what they were bred to do. And when you think about it that way, a dog’s life isn’t so bad.