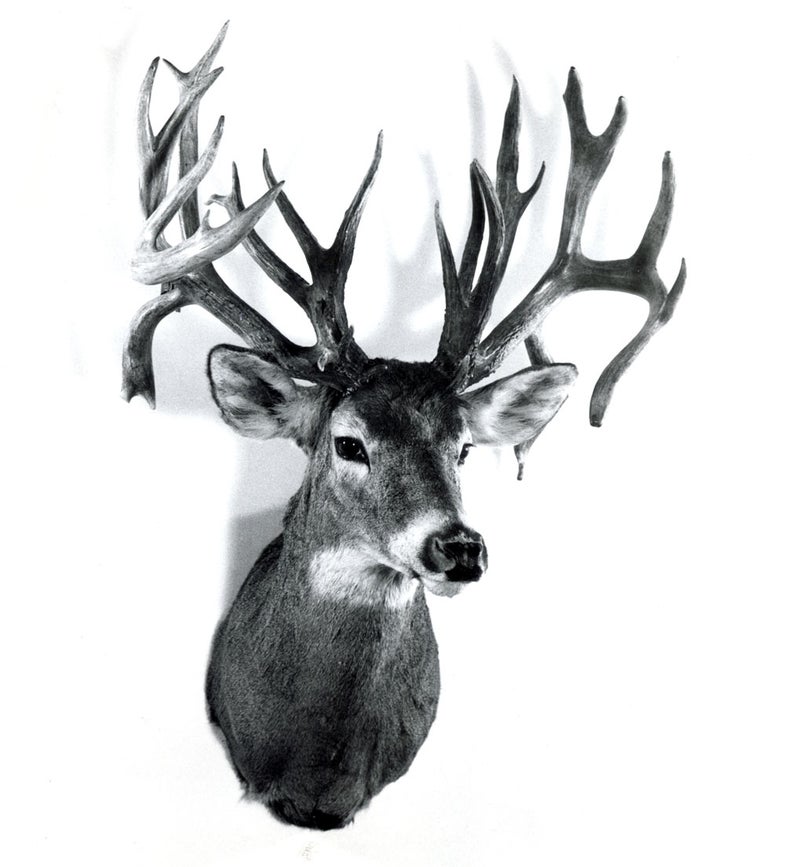 Not bad for a first buck.. Courtesy Boone and Crockett
SHARE

There are plenty of world records that would be relatively easy to beat. Guinness will certify you a global champ if you can eat more than 25 marshmallows in a minute, assemble a Mr. Potato Head blindfolded in less than 16 seconds, or stack 32 coins in 30 seconds. Seriously. But kill a world-record whitetail? Of the millions of bucks shot by hunters each fall, only a handful qualify for the Boone and Crockett record book. And only the tiniest fraction of those deer have a shot at being a world record. Even within this miniscule subset, most never reach the top of the mountain. So, just how high is the world-record whitetail bar? Well, take a quick scroll through the amazing bucks pictured below, and realize that none one of them made it. That should give you an idea.

Here are 11 incredible whitetails, both typical and nontypical, that came oh-so-close to breaking the B&C world record, but, for one reason or another, fell short.

1. Hole in the Horn Buck

Found by a railroad crew in Portage County, Ohio, in the fall of 1940, the 45-point whitetail has an amazing 192 inches of abnormal points. Apparently killed by a passing train, the whopper non-typical had lodged an antler beneath a nearby security fence, punching a hole in one of its drop tines. The monstrous buck would have easily claimed world-record status, but it wasn’t scored for more than four decades. In 1986 a panel awarded the amazing Hole in the Horn a net Boone and Crockett mark of 328²/₈ inches, just 5 inches shy of another huge non-typical buck found dead in Missouri, in 1981—the current world record, with a score of 333⅞ inches, officially entered in 1983.

Minnesota farmer Sal Ahrens shot this whopping typical in 1956 while hunting family land. Nearly three decades passed before the buck was finally scored, and the massive (7-inch bases!) buck grossed more than 230 inches and netted 212 inches—a score that would have blown the Jordan Buck—the B&C typical record—out of the water by nearly 6 inches. But then a taxidermist produced photos of the buck sporting several short abnormal points that obviously had been removed. Since B&C doesn’t accept altered racks, the buck was disqualified.

Nebraskan Ivan Mascher was hunting with his recurve in late November 1961, when a 19-point whitetail walked within range. Mascher made a perfect shot, the buck piled up quickly, and 60 days later, Pope and Young measurers determined the 198⅝-incher to be the largest non-typical killed by a bowhunter. But P&Y only certifies world records every two years, and before Mascher could claim the title, another Nebraska bowhunter—Del Austin—shot an even bigger deer. Austin’s 279⅞-inch buck, killed on a bowhunt in 1962, grabbed the top spot, where it would remain for 38 years.

Larry Gibson of Missouri nearly claimed the B&C world-record typical spot when he shot a massive 6×6, during the 1971 rifle season. But the incredible whitetail fell short by two tines; the right brow tine is slightly shorter than the left, and the right G2 had been injured while the buck was in velvet. Without those deformities, the Gibson buck would have easily had the 1⅛ inches it needed to knock off the Jordan Buck. But, at 205 inches net, this bruiser remains the third largest typical in the B&C record book. 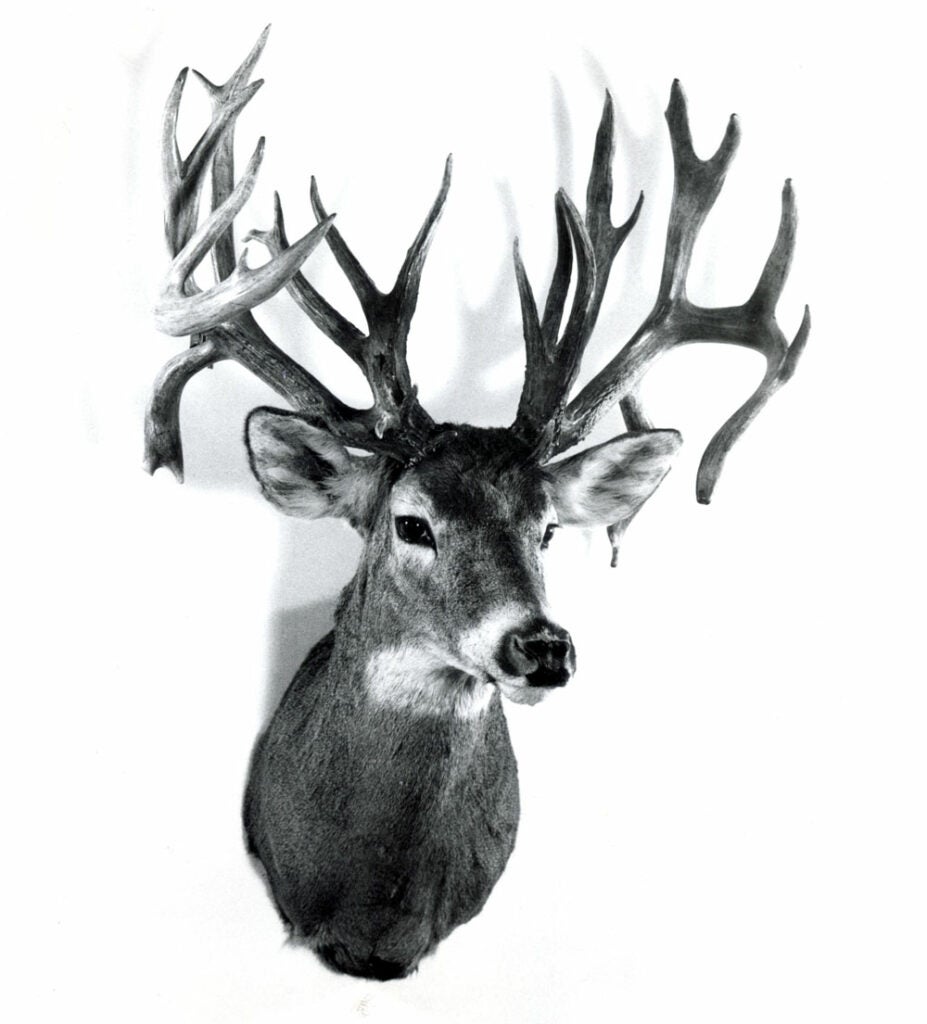 11 World Record Whitetails…That Weren’t Quite There

Not bad for a first buck.

The world-record nontypical mark was set at 284⅜ inches when Larry Raveling shot an Iowa giant during the 1973 season. Raveling’s world-class whitetail—his first buck—boasted 29 scorable points. Unfortunately, the buck had snapped off one of its massive drop tines. Scorers estimated that cost the buck nearly 8 inches, and the Raveling buck ended up netting 282 inches. The buck remains the 16th largest B&C non-typical.

Iowa’s reputation for whopper whitetails was built on bucks like this incredible 10-pointer. Wayne Bills shot the buck—his first—on a drive in 1974, but the rack wasn’t officially scored until 1991. Years of shrinkage, a chipped brow tine, and more than 3 inches of abnormal points kept this buck from becoming the world’s top typical. Still, at 201⁴/₈ inches, the Bills buck ranks number 11 in the B&C book.

Alberta hunter Ed Koberstein was toting a .270 when he hit the bush the morning of November 25, 1991. He used the flat-shooting rifle to drop this monster 9×8—at 45 yards. The massive buck was originally scored 207⅞ inches net and would have claimed the B&C world-record typical spot. But a panel viewed the rack differently, ruling the G6 points abnormal and dropping the buck’s net typical score to 188⅜ inches. Though the buck netted higher as a non-typical (224⅝ inches) Koberstein entered the buck in the B&C books as a typical.

On October 11, 1996, Sam Collora arrowed the highest-grossing typical whitetail ever shot by a bowhunter at that time. The massive 8×6 grossed 223 inches, and the Collora buck seemed to have a legitimate shot at toppling Mel Johnson’s typical record of 204⁴/₈ inches. But a panel declared two points on the left side were abnormal, dropping the score by nearly 30 inches. Had the buck not grown those points, the Collora buck would have been the P&Y world-record typical and the number three B&C.

In November 1998, Michigan bowhunter Mitch Rompola set the whitetail world on fire, when he arrowed a buck he claimed would not only shatter the P&Y typical world record, but that also beat Milo Hanson’s B&C world record. The 6×6 was incredibly wide (38 inches) with amazing main beams and symmetry. But shortly after Rompola released photos and some details about his hunt, skeptics emerged. Despite monetary offers to have the rack X-rayed, Rompola withdrew from the public spotlight and refused to talk further about the buck. Eventually, Rompola signed a legal document stating that he would never enter the buck for a B&C record, or refer to it as a world record, until Milo Hanson’s buck was beaten.

The famous “bow zone” near Edmonton, Alberta, has coughed up some amazing whitetails, but none quite like the one shot by bowhunter Wayne Zaft on October 8, 2001. The tall 6×5 yielded a gross typical score of 222⁶/₈ inches and netted 206⅞ inches in the original scoring, a mark that would have shot it to the top of P&Y typicals. But a panel score ruled that the right G3—the longest tine—was abnormal. This gutted the buck’s score; the final net dropped to 172⅝ inches, and, though the buck would have still qualified for the B&C and P&Y books, Zaft refused to enter the deer.

Wisconsin hunter Johnny King shot one gorgeous 6×6 in 2006, but after that, everything got pretty ugly. The first measurers who taped the buck thought it would break Milo Hanson’s B&C typical world record. But B&C records chairman Jack Reneau—who routinely weighs in on difficult measuring decisions—noted that the right G3 had an abnormal point, dropping the buck’s net score to 180¹/₈ inches. Unfortunately, this ruling was like kicking a beehive; supporters (including some veteran B&C scorers) inundated B&C with complaints that the King buck needed to be panel-scored. After months of pressure, Reneau—in an unprecedented break from protocol—relented. Four veteran measurers (Reneau was not present) gathered to panel-score the buck in September of 2012, and they affirmed the abnormal point and the score of 180¹/₈ inches.

Bonus: The One Buck Above That Actually Is a World-Record Whitetail

Of all the huge bucks above that didn’t quite make it, one did. Sort of. The Ed Koberstein buck actually is a world-record whitetail, but not in the Boone and Crockett book. A B&C scoring panel judged the buck’s G6s to be abnormal points, which dropped the deer’s overall typical score from 207⅞ to 188⅜. But unlike B&C, the Buckmasters Trophy Records (BTR) Full-Credit scoring system does not require typical racks to conform to perfect symmetry. As result, they score the Koberstein buck at 235⅞, which makes it the still-standing world-record BTR “typical” whitetail. (BTR doesn’t actually use the word “typical” but it amounts to the same.) Milo Hanson’s famous B&C No. 1 typical whitetail, in case you’re wondering, stands at number 19 in the BRT rankings. —S.B.