Lightning, which does strike in the same place twice, can literally knock your socks off and change your personality 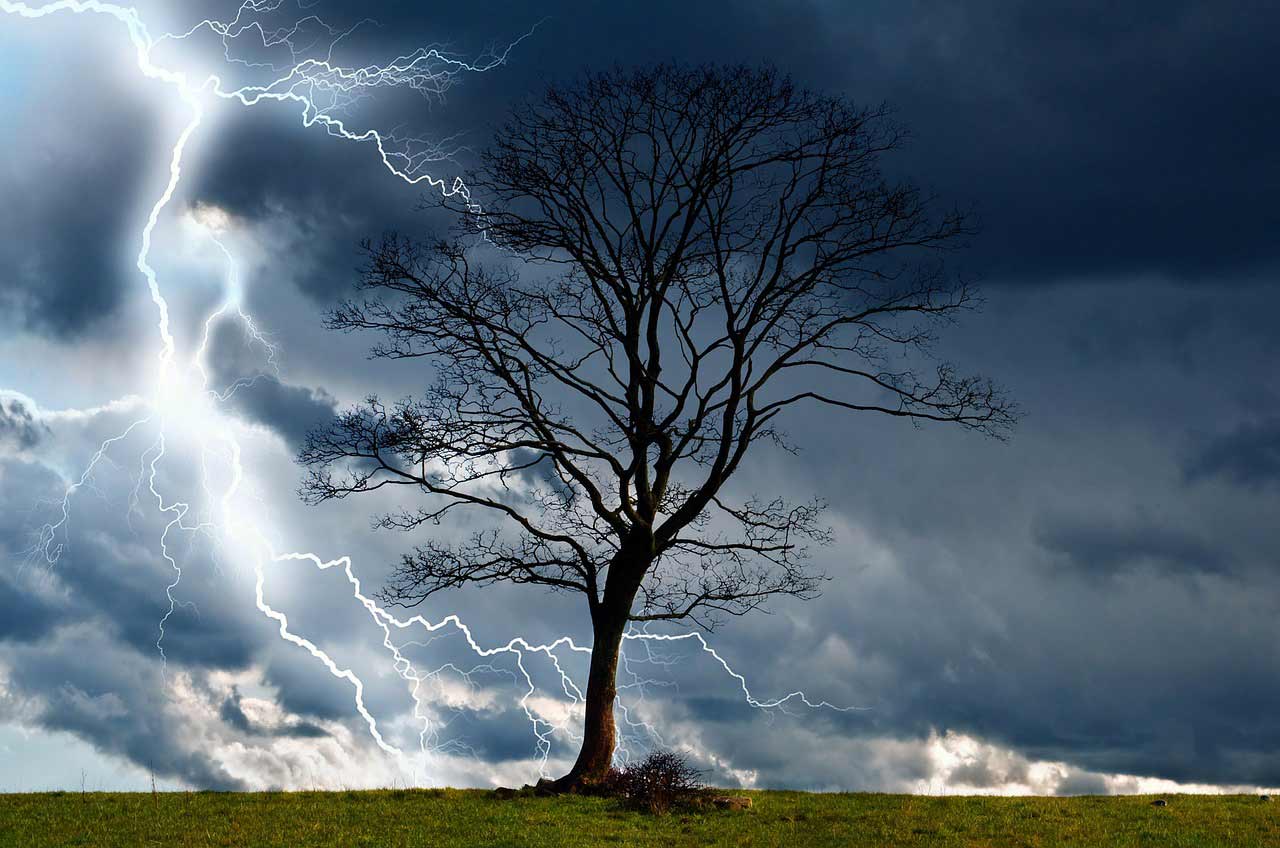 Trees can explode when struck by lightning. PublicDomainPictures/Pixabay
SHARE

Lightning is much simpler than people realize. It’s nothing more than a brilliant, naturally occurring electrostatic discharge in which two electrically charged regions in the atmosphere or on the ground temporarily equalize themselves, causing the release of up to a billion joules of energy. There. Aren’t you glad you asked?

Myths abound about lightning. It does strike the same place twice. It is not attracted to metal. And if you want to get hit by it, Florida is a swell place to go. Where myths abound, so do surprising facts. Here are 13 things you probably didn’t know about lightning, a few of which could save your life, or at least win you a few bucks.

1. Lightning does not come from the sky.

We all think of lightning as nature’s air-to-ground missiles, but it’s actually the other way. The negative charge preceding a lightning strike hits the earth—or an earth-bound object like a tower—and then a visible flash zooms from the ground up. This takes place in a millionth of a second, so it’s kind of hard to tell which way the strike is actually moving. But it’s generally up. This could help you win a bar bet.

2. Men are nearly four times more likely to be killed by lightning than women.

That’s bad news for guys, but in this case, it has nothing to do with feminism. It’s because men spend more time outdoors, especially fishing, which turns out to be a great way to get zapped. According to the National Oceanic and Atmospheric Administration, between 2006 and 2016, 33 people were hit by lightning while fishing, more than any other outdoor activity. Think about it: You’re out on the water with nowhere to take shelter, and you’re the tallest thing around. If you were lightning, you’d hit a fisherman, too.

3. Lightning is not attracted to metal.

Lightning is attracted to the tallest thing around, which often happens to be metal. Think field-goal posts, TV towers, and the top eyelet of a fishing rod while casting in a boat on a lake. Metal does, however, conduct electricity efficiently, which is why you shouldn’t climb a field-goal post during a lightning storm or lick a downed electrical wire, even if there is no lightning.

Wearing rubber boots, for example, doesn’t reduce your odds of being struck and won’t make things any less excruciating if you do get hit. Same goes for car tires. The reason a car is a good place to be in a storm is because the metal top and sides conduct the electricity around you and into the ground. If you’re in a car, the best thing to do is pull over, turn off the engine, and don’t touch anything metallic in the car. Just keep your damn hands to yourself.

5. The best place to get struck by lightning in the U.S. is Florida.

Of the 15 U.S. counties with the most lightning strikes, 14 are in Florida. It makes sense. Geographically, the place has water on three sides. Meteorologically, it has a subtropical climate, with almost daily thunderstorms. Behaviorally, it has lots of dudes fishing, some of whom are drinking beer, which does not increase common sense. “Lightning Alley” between Orlando and Tampa is a particularly good place if you have limited time and want to maximize your odds.

6. Your odds of surviving a lightning strike in the U.S. are about 90 percent.

This is in part because CPR is so widely practiced here. On average about 51 Americans die from strikes annually, although the total has decreased in recent years. Just 16 people were killed by lightning in 2017. The Guinness World Record for being struck belongs to the late Roy Sullivan, a U.S. Park Ranger in Shenandoah National Park. He was struck seven times—the odds of which are 1 in 10 to the 28th power. He survived them all and lived a more or less normal existence until he took his life at the age of 71.

7. Thunder and lightning are the same thing, kind of.

Thunder is the sound lightning makes. Okay, pay attention, because this is the science part. Lightning is a stream of electrons flowing between or within clouds, or between a cloud and the ground. The electrons heat the air around them to 50,000 degrees Fahrenheit, hotter than any Big Green Egg. As the hot air cools, it creates a “resonating tube of partial vacuum surrounding the lightning’s path,” according to Scientific American. The rapidly expanding and contracting air in the tube makes a big cracking sound. As the cracking-sound vibrations die out, they rumble. Thunder can be heard as far as 10 miles away.

8. Your odds of being struck by lightning are probably going up.

Currently, your odds of being struck in a given year are about 1 in 1.2 million, and about 1 in 15,000 during your lifetime, according to the National Weather Service. Yet astraphobia—the fear of being struck—is one of the most common phobias in America. But the odds are likely going up. The cause? Climate change, just like everything else. A study in Science magazine predicts that for every degree of global temperature increase, the number of lightning strikes increases by 6 percent.

9. You can be killed by lightning while standing beneath a clear blue sky.

Lightning can strike up to 10 miles away from a thunderstorm. A lightning bolt is about an inch wide in diameter and can be as much as 90 miles long, according to researcher Martin Uman, author of All About Lightning.

10. Lightning can literally knock your socks off.

The blast of superheated air that accompanies a lightning strike can cause clothing to explode off your body. Lightning can also turn the sweat on your body to steam, giving you third-degree burns. (The sudden expansion of sap is what occasionally causes trees to explode when hit.) Blood vessels may rupture, leading to a temporary scarring pattern known as Lichtenberg figures.

11. Electricity can save the life of a lightning-strike victim.

Strikes most often kill because the massive electrical discharge stops a victim’s heart. Paradoxically, what the unconscious victim may need most is a second shock from a defibrillator to restart the heart. Victims have likened the pain of a strike to being stung from the inside by a thousand hornets or being inside a microwave oven.

This myth is regularly proven wrong when a strong storm passes over very tall buildings or TV towers, which can be hit multiple times in a single weather event. Each year, New York’s Empire State Building is struck anywhere from 25 to 100 times.

13. Lightning can change your personality.

In a Psychology Today blog post, University of Miami neuroscientists tell of an orthopedic surgeon who, after being struck by lightning, developed an urge to play the piano. A few months later he gave up medicine to become a classical musician. This was almost certainly a great disappointment to his parents.