How to turn whitetail hunting’s primetime into an utter disaster 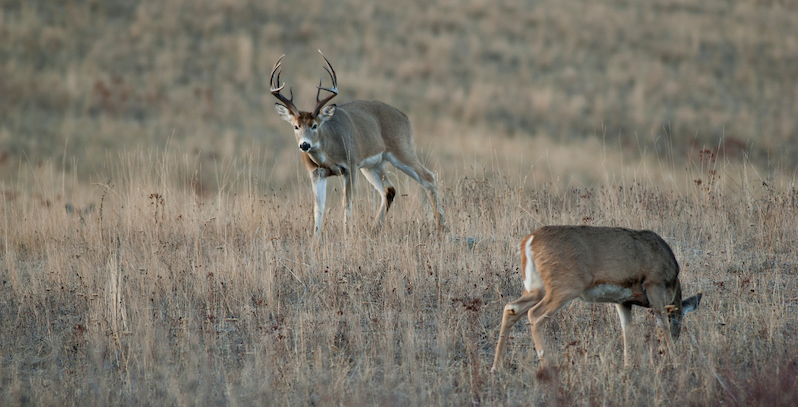 A rutting buck moves in on a doe.. John Hafner
SHARE

The rut is the Super Bowl of whitetail hunting. Bucks that typically behave like ghosts are suddenly vulnerable, and your chances of tagging a wall-hanger are at their highest. But whitetails are still whitetails—always cautious and rarely pushovers. So there are plenty of ways you can go wrong. Here are 15 ways you can turn the annual breeding season into a surefire flop.

Perhaps the most classic screwup is waiting until “things to get good.” Many hunters won’t hit the woods until they see bucks running after does like hounds on a coon. If you wait for the nuttiness, you often end up chasing the action rather than enjoying it. Far better to start early—as in two to three weeks before peak breeding—when mature bucks are laying down sign and moving freely in their core areas. Minnesota hunter (and my neighbor) Dave Olson shot this whopper the last week of October—three weeks before the rut peaked in our area.

Sure, rubs and scrapes are exciting, but never forget that bucks are constantly moving during the rut, and they do so by moving through terrain quickly and efficiently. Funnels like creek bottoms and fence lines that connect distant blocks of cover are perfect examples. I shot this pretty 10-pointer midday, as he moved through a small triangle of timber between doe bedding areas. There was not a rub or scrape within sight.

This is one of the easiest, and most common, traps to fall into. After weeks of pre-season practice, and now that you’re bow is sighted in and scary-accurate, you quit practicing as soon as you get serious about hunting. Big mistake. To maintain focus and ensure that your equipment hasn’t changed, keep shooting so that you’re ready when that giant you’re after finally steps out.

4. You forget about food.

When the rut heats up, it’s easy to focus solely on bucks. But never forget that what bucks are seeking are does—and does are focused on food. The most important question you should be asking is, What are does eating right now? If you can answer that, you’ll be into deer, no matter the phase of the rut.

You know that old dawn-and-dusk peak movement pattern we associate with whitetails? Well. throw that out the window when the rut gets rocking. When a mature buck finishes breeding a doe, he’s off looking for the next one, and he doesn’t check his watch before he’s up and moving again.

When you kill a buck from a stand or blind, it’s common practice to rest that spot for a few days, letting whitetails settle down after your intrusion. Toss that rule out the window during the rut, especially if a stand is in a terrain funnel. Bucks are moving so much right now that the next deer through that spot will probably have no clue you were there yesterday. So, if you don’t have an extra buck tag, put a buddy in there who does. This pair of great Illinois bucks was killed Joe Gizdic from the same stand, two days apart.

If you’re smart, you’ve stayed out of bedding areas; your chance of bumping a good buck from his safe zone is just too high during the pre-rut, and you also want those old does to feel safe. But now it’s time to take the gloves off. Your buck is going to be late getting back to bed as he chases does, and he’ll be headed to those spots where does like to sleep. This Minnesota monster was killed in a bedding area that’s only hunted during the rut.

Yes, you can be too timid, and too aggressive. If a big buck is going to do something stupid, he’ll do it during the rut. But you can’t bank on it. Unless a buck has a hot doe right in front of him, he’s going to act like the Survival Mensa that he is, believing his nose, ears, and eyes when they warn him of danger. So you can’t cut any corners. The best rut stands are no different than those that are effective during the early season. They need to be in great spots and well camo’d, and you need to be positioned well with the wind. Ohio bowhunter Adam Hays killed this buck with just such a setup.

9. You scout poorly, or quit altogether.

The rut is erratic, often progressing in fits and starts, and shifting locations. If you’re not into deer, take the midday hours and speed scout until you find hot sign (usually near feeding areas) and readjust your setups.

This is my TRS (top rut screwup). I’m shocked by how many hunters carry a grunt call and rarely use it, or tote rattling antlers that never get cracked together. Whitetails are social critters, and the rut only amps up their desire for company. If a buck is not coming within range, you have nothing to lose by calling or rattling. And here’s big hint: you’re probably not calling or rattling loudly enough. I spotted this Iowa buck on neighboring property, then rattled to get his attention. He jumped two fence lines and crossed a creek to cover the 500 yards between us.

Hunters are all about using dekes for dvoes, turkeys, and waterfowl, and turkeys, but rarely use them for deer. Big mistake. Sure, deer decoys are bulky and a pain to carry and set up, but trust me: once you lure just one buck across a big field, then watch him bristle up and prepare to knock your decoy into next week, a fake deer will be part of your game plan forever.

It’s normal for hunters to focus on antlers during the rut. But don’t let the prospect of tagging a wall-hanger distract you from keeping tabs on the local does. If you want to find bucks consistently during the rut, you need to know where your does eat, sleep, and walk. Focus on finding does, and the bruisers will not be far away.

The firearms season coincides with the rut in many states, and that influx of pressure can influence whitetail-breeding activity. Think about it: What if a crowd suddenly started staring at, and interfering with, every effort you made to meet a lady. How would you react? You’d probably seek a little privacy. Deer do the same. When the blaze-orange mob hits the woods, look for thick, nasty, inaccessible places where most guys won’t go. That’s where the rut will be happening.

RELATED: Secrets of the Whitetail Rut

Whitetails’ urge to breed is so strong that it’s going to happen regardless of weather. That said, cold fronts and storm systems dictate a lot of the big rut action hunters see during this time. Hunters who pay attention to weather can capitalize on the right conditions—temp drops, the prelude and aftermath of fronts—that will put a giant on his feet in daylight. My neighbor ended his two-year quest for this monster by hunting on an afternoon so cold that most of us were inside watching football.

For deer, the rut is a marathon, not a sprint. Why should it be any different for you? Unless you tag out in the early phases, you need to brace yourself for the grind. Eat right, get your sleep, and keep telling yourself, Today is the day. Think that each time you go out, until you finally put your tag on a giant. If you burn out early, you won’t have the stamina to wait out a wall-hanger.

David Hale and Harold Knight are legendary hunters. With a combined 80-some years of experience between them, they have made all the mistakes. Here is their list of Top 10 Rut-Hunting Mistakes. How many of them do you make each season?

“Are you willing to bet your season on a single fresh scrape or rub?” Hale asks. “Most hunters forget that some scrapes are visited only at night, some are rarely if ever visited after they’re made, and very few are worked on a regular basis.”

2. Hunting where you saw bucks a month ago

“During the rut, forget about where you saw bucks last month,” Knight says. “Now it’s better to hunt where the does are, because that’s where the bucks are, or are going to be shortly.”

3. Hunting in places that are too thick

“Thickets are great places to find deer, but you have to be able to shoot them when you see them.” Knight recommends hunting the edges of the thicket so that you can see-and get a shot at-deer when they move past.

Hale asks, “How many times have you heard someone say, ‘He came in behind me and I didn’t have a shot’? I make sure I have a cleared shooting lane in at least three different directions during the rut.”

“Bucks may get dumber during the rut, but they’re not stupid,” Knight says. “And big does never are. You have to maintain cleanliness and complete scent control at all times in the deer woods.”

“Preferred food sources concentrate does in pockets,” Hale says. “And sooner or later, one of those does will come into estrus. When she does, I want to be there. That’s when the action will get fast and furious.”

Knight says, “The rut is the best time of year to call a buck in, especially using a grunt call, but also a doe bleat. This is the time of year you need to be calling a lot, because there is a high probability that a buck will respond to your call.”

8. Not paying attention to equipment

“Because it’s the rut, more people hit the fields running, but too many of them pay too little attention to their equipment,” Hale says. “Be sure to sight in your rifle or bow, and make sure all the stuff in your daypack is in good working order.”

9. Not making an effort to find different places to hunt

“Most of us get very comfortable hunting places with which we are familiar. Heck, that’s half the fun of a deer hunt,” Knight says. “However, your old faithful stand site this year just may not produce. I always try to have at least two backup locations I can go to when my favorite stand site isn’t working. Stay flexible and hunt where the deer are, not necessarily where you want to hunt.”

10. Not hunting all day long

Hale says, “People tend to forget that during the rut a big old buck can be seen roaming just as easily at noon as he can at dawn and dusk. This is probably the No. 1 mistake rut hunters make. Forget about going back to the lodge for lunch or a nap. Instead, get ready for action between 10 a.m. and 2 p.m. That’s when I’ve taken many of my best bucks.”