“Hooks Shots” host Joe Cermele braves the February chill in Upstate New York for some lessons in winter steelhead on... 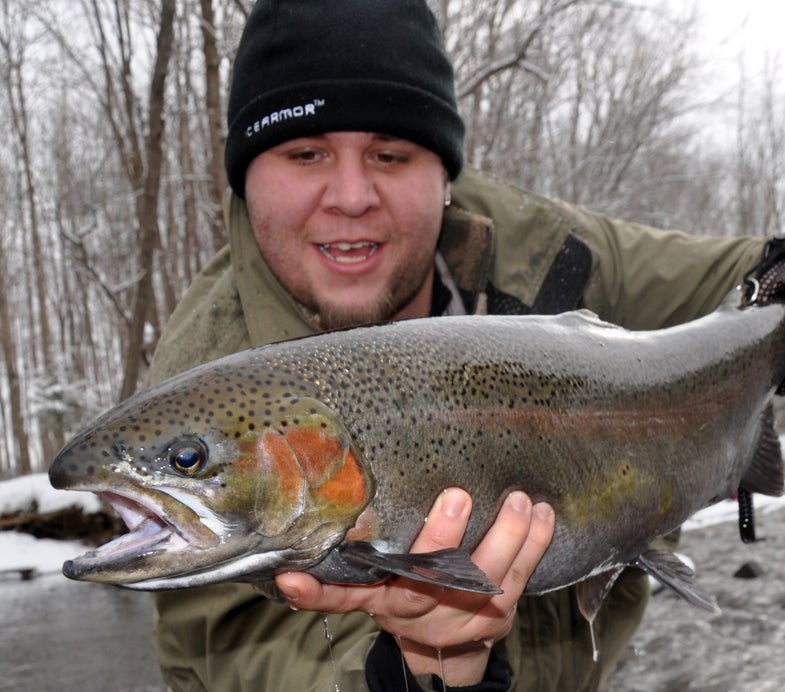 “Hooks Shots” host Joe Cermele braves the February chill in Upstate New York for some lessons in winter steelhead on the Salmon River. Though this river is lined shoulder-to-shoulder with anglers in the fall, the coldest months of the year are reserved for the “Chosen Frozen.” But to earn the title, numb hands, snotty noses, and iced rod guides must be endured.

The Deal: Pulaski, New York, is considered a premier location for Great Lakes steelhead and salmon that run up the Salmon River, which cuts right through town. Roughly five hours from New York City, and just an hour north of Syracuse, Pulaski puts many Northeast anglers that feel the need for steel within pretty close range. But just one warning: The stretch of the Salmon that holds migratory fish isn’t all that long, so if you can, make the effort to go during the week or be prepared for competition in the best runs, regardless of the season.

When To Go: King and silver salmon start to show in the river in August, and as late summer turns to fall, the steelhead move in to feed on their eggs. Though the salmon die after spawning, the steelies remain in the river through April. October and November are arguably some of the best months, but if you can deal with the cold, winter still offers killer fishing sans the crowds. Plus, anyone who catches s steelhead in the coldest months of the year automatically earns membership into the “chosen frozen.” Steelhead remain on the bite into April, when guide Jason Edwards says it’s not uncommon for him to turkey hunt in the morning and catch steelies in the afternoon.

What To Bring: Insulated boot-foot waders are a must in winter, as are cleats to wear over them to combat the slick bottom. This style of wader will also keep your feet warmer than stocking-foots when matched with good thermal socks. Eight- to ten-foot noodle spinning rods are the norm for steelhead, though guide George O’Brien prefers ten-foot seven-weight fly rods with spinning reels taped to the handles. According to O’Brien, the shorter fly rod grip makes the angler fight the fish with their forearm, which offers better control than jamming the butt in your stomach or under your arm. Six- to ten-pound monofilament gets the nod, as braid holds more water that will surely freeze. When bottom-bouncing, O’Brien prefers pencil leads as opposed to split-shot, and runs his flies off a four-foot, six-pound-test fluorocarbon leader behind the weight. Egg patterns, black nymphs, and locally tied Salmon River “fleas” all work well.

How To Fish: Make a cast directly in front of you, keeping the rod at shoulder height as the weight “ticks” downstream through the run. You want your line to be tight always, so avoid casting too far upstream as it creates slack. As your line swings, lower the rod tip. A strike will simply feel like a harder-than-average tap or stop. Don’t swing for the fences to set. Just slowly raise the rod and you’re on.

Where To Fish: Most of the Salmon River is open to the public, with many designated trails and parking lots along Sheepskin Road, County Road 52, and County Road 22 just outside Pulaski. In the fall, steelhead are moving more, so you have a better shot hooking up anywhere along the river. But in winter, the fish slow down and stack up in deep channels with moderate current. You’ll know which ones are holding fish, because someone will most likely be fishing there already. According to O’Brien, in the winter, miles of the river can be dead and productive holes spaced far apart.

Where To Stay: There are several motels and cabins to rent in and around Pulaski, but we highly recommend booking your stay with The Douglaston Salmon Run.