Five Startling Things F&S Readers Have Seen in the Woods

▶ While hunting antelope in Montana, I had crawled about 80 yards to get a clear shot at a nice... 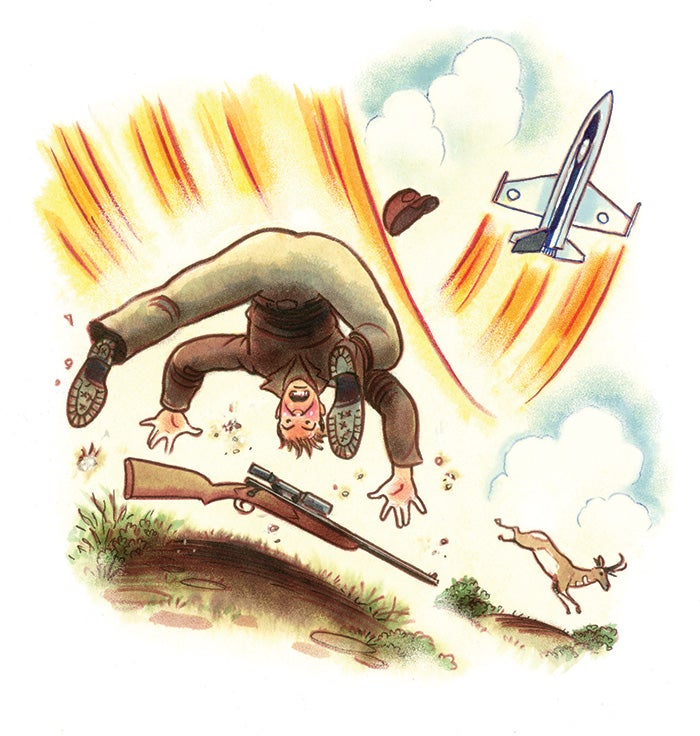 ▶ While hunting antelope in Montana, I had crawled about 80 yards to get a clear shot at a nice buck. I was within a second of firing, when boom! A fighter jet was doing low-flight drills over the valley, just 100 yards overhead. It was the last I saw of that buck, and almost that pair of underwear. —Greg Paull

▶ Five miles back in the woods, I came across three guys: one toting a car battery, one a TV, one a satellite dish. Some people really can’t unplug, I guess. —Eric Rehm

▶ We hadn’t seen a soul in two hours of hiking. Then the naked guy jogged by. He just waved and smiled. —Michael Olson

▶ I was hiking when I suddenly looked up and saw a jaguar crouched on a fallen tree. I froze—it scared the bejesus out of me. Turns out, it was a stuffed replica some evil genius had nailed to the tree. —Ed Popeck

▶ I watched a golden eagle pick up a cat, and then drop it as two bald eagles challenged him for it. It was a heck of a fall, but that’s still one lucky kitty—Kenny LeNoue

RELATED: Six Terrible Fishing Tips You Should Never, Ever Try