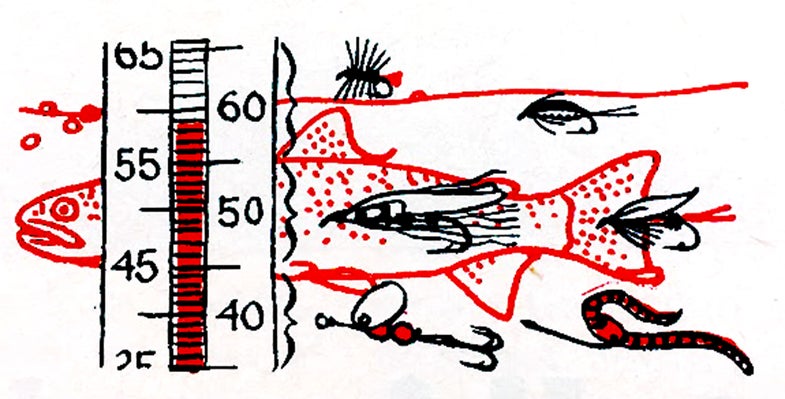 For 35 years, H.G. “Tap” Tapply was a mainstay in the pages of Field & Stream, writing the hugely popular “Tap’s Tips” column. Each month, he served up a batch of clear, concise tips, publishing 2,500 of them before his retirement, in 1985. He covered it all—dog training, upland-bird hunting, big game—but here, in time for summer, we’ve collected 34 of his greatest fishing tips. We’re sure you’ll find his advice just as useful today as readers did when it first appeared in print. —The Editors

Here’s a simple tip I wish I’d heard years ago. When trout fishing in cool weather, switch your bottle of floatant to an inside pocket. Why? To keep it warm, natch. Most floatants, such as Mucilin and paraffin dissolved in carbon tet, get gummy when cold and won’t float a fly.

Don’t let muddy water keep you from bass fishing. Bass may ignore sunken lures, which they can’t see, but a noisy surface bait often gets them. Fish around brush piles and weeds with top-water plugs or fly-rod poppers, and make them splash and sputter as much as you can.

Often it’s the seemingly unimportant things that make fishing good or spoil it. One is the way you approach a spot you plan to still-fish with bait. The best way is to come in from upwind, kill the motor, and let the boat drift noiselessly into position on a long anchor line.

RELATED: 20 Secrets to Help You Catch Fish All Summer Long

Trout, especially brookies, like cold water, but not as cold as it usually is during the snow runoff. As long as water temperatures register in the 40s and 50s, dredging tactics will take the most fish. By far the best way is to roll a lively worm over the stream bottom.

A coiled nylon leader can be straightened by soaking it in liquid detergent. Or you can strip it through a piece of tightly folded rubber. But the quickest and easiest way of all is simply to stretch it. That’s also the best way I know to take the reel coils out of a fly line.

Well, you can always eat the bait if it’s crawfish and the bass aren’t biting. Select the largest and freshest and dump them into salted boiling water. Cook for about eight minutes. Like lobsters, they turn red when cooked. There’s a surprising amount of meat in claws and tails.

Old sponges, either rubber or synthetic, make good fishing bobbers, according to F&S reader Paul Piper of Oak Park, Ill. Cut the sponge into pieces up to an inch in size, run the hook through the sponge, and slide it up the leader. When it soaks up water, squeeze it dry to keep it afloat.

When a leader won’t turn over smoothly at the end of a cast, it probably needs more body and stiffness in the upper end. Instead of reducing the diameter uniformly, taper the upper two-thirds gradually, then use shorter pieces of fine monofilament down to the tip.

Like to make your own dry-fly floatant? Easy. Shave ½ ounce white paraffin into 2 ounces carbon tet (or in any 1 to 4 ratio). Set the container in warm water and stir. Pour the solution into a bottle with a mouth large enough for flies or one with a brush in the screwcap.

To make a fishing boat easier to maneuver when alone, particularly when casting for bass along a shoreline or over weed beds, attach an oarlock to the transom and scull the boat with an oar. Mount the oarlock on the side, so it won’t interfere with the outboard motor.

Sometimes a fly line will float, better if it is cleaned, instead of dressed with floatant. Dressing collects dirt, which can sink the line. Modern top-water lines will float almost indefinitely if the finish is not damaged. If the line must be dressed, wipe off surplus with tissue.

Both the number of guides and their spacing on a fly rod can affect the ease with which the line slides through. You’d think that the fewer the guides, the less the friction, but the opposite may be true. Line sagging between guides too far apart is harder to “shoot.”

To reduce boating accidents, underwater stumps in some Ohio lakes have been marked with white stakes. The stakes keep boaters away, but bass fishermen use them for casting targets. As bass lurk in such places, it might pay to mark any you find for future reference.

If you wonder whether your anchor line will last another season, that’s reason enough to suspect that maybe it won’t. Check it for cuts and frayed spots, If it looks too good to replace, reverse it so the heavy wear is at the other end. Could save you an anchor or even your boat.

When spin-fishing a surface plug with a pop-and-stop retrieve, put some tension on the line while reeling in. Otherwise, loose coils of line will collect on the reel spool and jam the next cast. Tension can be maintained with the fingers or by holding the rod tip way back.

Always fish out a cast that goes astray. The natural reaction is to snatch back a sloppy cast and try again, but that may frighten fish lying in the area. When a fly or a lure misses the target, retrieve it carefully. Many a good fish is caught by working out a bad cast.

Don’t throw away a favorite old fishing jacket just because it no longer sheds the rain. You may never find another quite as comfortable. Let the dry cleaner give it a professional waterproofing job good for another couple of seasons. (From Jim Nichols, Valdosta, Ga.)

Here’s another whip-finishing tool, this one from Al Anderson of Quincy, Ill. It’s a loop of monofilament wedged with toothpick and glue into a length of thin plastic tubing. The tube is so light and flexible you don’t have to hold it while winding.

Fishermen can protect the fishing in their favorite lake by not using baitfish from other waters. For one reason, baitfish may become established as undesirable competition to native species, or they may even introduce a new parasite such as a bass tapeworm.

A thermometer can often suggest the most effective trout-fishing method. In water 55 degrees or warmer, dry flies and barely submerged nymphs work well. From 45 to 55 degrees, try streamers and weighted wets or nymphs. Under 45, go deep with bait or hardware.

June is the best month of the year for bass fishing with a light fly rod. The adult fish have moved into the shallows to spawn and take streamers and bugs readily. You can have a circus with them and return all fish unharmed if you bend down the hook barb.

When rising trout ignore a dry fly that looks (to you) as if it matched the hatching naturals, it’s usually because it doesn’t (to the trout). You can test your imitation by casting it near some drifting naturals and noting how the pattern differs in size or color from the living fly. (May 1964)

When flies are hatching, don’t worry too much about finding the perfect imitation. Tie on a floater about the same size and color and concentrate on fishing it. A natural, drag-free float will usually take rising trout even if the pattern doesn’t match the hatch exactly.

If you can’t heave a spinning lure as far as you’d like, don’t blame your casting ability till you check for mechanical reasons. Maybe the lure’s too light, or the line too heavy, or both. Fill the reel spool to about ⅛ inch from the lip; less line cuts distance, too.

Painting eyes on the heads of streamer flies and bucktails makes them look even more like live minnows. First apply a dot of fast-drying white or cream enamel with the head of a finishing nail. After it dries, add a black-enamel pupil with the head of a smaller nail.

Spinners with dark or even black blades are often more effective than those with sparkling silver or gold ones, especially in low, clear water (sometimes in discolored water, too). When a pet spinner becomes badly tarnished, save it to try when trout don’t like shine.

Use the anti-reverse and let the drag do the work when a heavy fish takes line from a spinning reel. Recover line only when the fish stops or comes toward you. Turning the crank while line is coming off the spool does no good, and can put a twist in the line.

Running an outboard motor out of water, even for a short test, can be risky. This may damage the rubber water-pump impeller, which should be wet when operating. There’s also danger from the whirling prop. If you don’t have a water barrel, wait till launching time.

Never turn an outboard motor upside down immediately after lifting it off the boat transom. Water that has not drained out of the cooling system may seep into the heated cylinders through the exhaust ports. Let the kicker cool off and dry out before turning it head-down.

When trout streams shrink to summer levels, try fishing the outside of bends, where the current has gouged a deep, dark channel close to the bank. All the trout won’t gather there, but some of the big ones will. Fish a deep-drifting nymph by day, a dry fly at evening.

Nearly all beginning fly casters fail to bring line and leader up to the surface before making the pickup for the back cast. Lifting a sunken line overloads the rod, so a clean, high back cast is almost impossible. One reason a floating line is best for most tyros.