Land more walleye with these rods and proven presentations for ornery 'eyes. 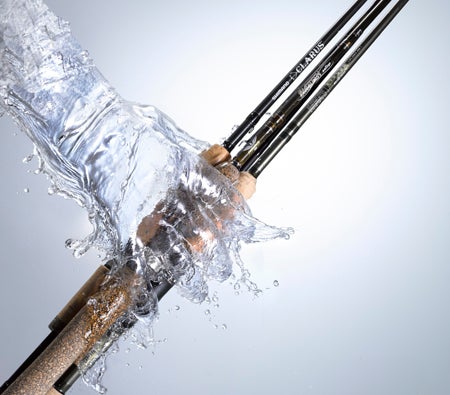 The walleye is better known for its flesh than for its fighting abilities. But we still respect it as a sportfish because its oh-so-light bite makes it oh-so-hard to catch. A good spinning rod for jigging ‘eyes must be strong enough to set the hook firmly and handle big fish, yet sensitive enough for you to detect that subtle take. We gave four walleye fishermen four rods to find out which helped them put the most fillets in the fryer.

★ ★ ★ ★ ★
Specs – Length: 6’6″ • Power: ­medium-light • Lure weight: 1⁄8 to 5⁄8 oz.
The Lowdown: The Fenwick Elite Tech Walleye earned high praise all around. The test team felt the rod was well made and sensitive enough to detect subtle takes. One tester singled out its hooksetting ability. Hill called it “well balanced, lightweight, but very strong. It’s extremely sensitive from tip to butt.” Reiser said, “To fish eight or 10 hours with a heavy rod” is a chore, but this rod was “a joy to use.” Cicinelli’s one complaint was that the rod proved “a bit underpowered for vertical jigging. It’s better suited to drift jigging with live bait.”
Hits: “You can feel the lightest tap.” –Hill
Misses: “The highest price of all four rods.” –Cicinelli
MSRP: $150

Schill liked the rod’s hooksetting ability with enough sensitivity “to feel that twitch.”

★ ★ ★ ★
Specs – Length: 6′ • Power: ­medium-light • Lure weight: 1⁄16 to 1⁄2 oz.
The Lowdown: Although not the top performer, the price of the Bass Pro Shops Walleye Angler Signature Series made it a solid value. “It’s not as rugged as the others,” Cicinelli said, “but it’s plenty tough.” He didn’t love the ratcheting reel-seat mechanism, feeling that “it might not hold the reel tight over time.” Reiser thought it was “innovative.” Hill said the rod had plenty “of backbone for handling fish” but felt the tip could have been more sensitive. Schill liked the rod’s hooksetting ability with enough sensitivity “to feel that twitch.”
Hits: “Good sensitivity.” –Reiser
Misses: “A little heavy.” –Hill
MSRP: $90

★ ★ ★
Specs – Length: 6’6″ • Power: medium • Lure weight: 3⁄16 to 5⁄8 oz.
The Lowdown: The only two-piece rod, the ­Shimano Clarus CSS66M2B was cited by two testers for its portability. But it drew divided opinions about its suitability for jigging walleyes. Two thought the rod performed admirably; two thought it was “too heavy” to handle light-​­biting walleyes. “The action was a little too slow and sluggish,” said Cicinelli. He did say the rod was “well built and durable,” an appraisal echoed by Schill. Despite feeling that the rod was a bit stiff, Schill said it helped him land fish quickly, and the rod’s construction made it versatile, improving its overall value.
Hits: “Rugged.” –Schill
Misses: “Poor balance.” –Hill
MSRP: $80

Learn their secrets or be left behind this season with an empty cooler and plenty of frustration.

After a cold front shuts down the bite, most anglers go to lighter tackle and slower presentations. Not Perry Good. He goes bold, using bigger lures and erratic retrieves to provoke reaction strikes.

“I like to rip a jigging spoon,” Good says, noting that this classic ice-fishing lure can also fire up lethargic open-water walleyes. Choose a ¼- to ½-ounce model and cast to the edges of weedbeds, timber, or rocky structure. Wait for it to flutter to the bottom, then jerk the rod tip to rip the spoon toward the boat. Let it sink and repeat. If this action doesn’t trip a fish’s fuse, Good tries the same presentation with a 1/8- to ¼-ounce jig and a 3-inch shiner.

2. Use a Planer Board

For eliciting bites from walleyes, the use of planer boards has been, according to Tommy Skarlis, “the biggest advancement in the last 10 years of tournament fishing.” But, he admits, it’s all for nothing if you miss those strikes. When he trolls a crawler harness beneath a board, Skarlis boats more of the subtle biters by adding an Offshore Tattle Tale Flag strike indicator ($22; 800-237-4444; cabelas.com). The flag signals any slight change of the planer’s action. Also, because short-striking walleyes often nip the bait below the terminal hook on a standard harness, Skarlis puts a No. 10 light-wire treble at the very end of the crawler to nab sneaky bait stealers.

To increase hookups as he searches for scattered fish suspended in open water, Ted Takasaki adds slider rigs to his trolling setup. These are basically droppers attached to the main trolling line via a sliding snap about halfway between the planer board and the boat. Where legal, sliders let you cover a wider swath of water and try a variety of baits to pinpoint what walleyes want on a given day.

Takasaki uses a heavier dropper line (usually 20-pound) than his main line to help prevent tangling. The key to the tactic, he says, is to vary the depth (by adding more weight or longer line) and spinners and crank-baits until you start getting hit.

A roach rig is a classic setup for slowly trolling or drifting live bait along promising bottom structure. It typically features an 8-pound-test main line and leader and a ¾-ounce sinker. But when the bite turns tough, Mike Gofron tweaks this old standby for a more natural presentation. First, he lightens things up with a 6-pound mono main line, a 3/8-ounce sinker, and a 4- to 8-foot-long 4-pound leader. Second, he anchors directly above marked fish and presents the rig vertically.

“With your finger on the line, you’ll feel the minnow start to get livelier,” Gofron says. “It’s acting that way because a walleye is right on its tail.” That’s when you want to open the bail to let the bait swim free–the panicked flight will attract a strike from the walleye.

The crawler harness isn’t just for bottom fishing anymore. When walleyes suspend high in the water column (and where multiple lines are legal), Paul Meleen pairs this traditional favorite with a deep-diving crankbait. This enables him to better control the depth of his presentation. Meanwhile, the crankbait’s diving action keeps the lures separated and contributes movement to the spinner.

Here’s how to rig it: A three-way swivel goes on the end of your main line. To the top ring, tie a 5-foot leader and connect a crawler harness with a quick-change clevis. On the remaining ring, tie a 10-foot leader and attach a snap and a crankbait. With the snap and the clevis, you can change baits easily. Switch often until you start nailing fish.

When bass pros complained about catching too many walleyes on his home waters in west-central Wisconsin, Nick Johnson copied their tactics. He started retrieving a suspending jerkbait over shallow structure and discovered that aggressive postspawn walleyes are just as quick as bass to clobber what appears to be a wounded baitfish.

Copy Johnson by casting a Berkley Frenzy, Rapala Husky Jerk, or Lucky Craft Pointer SP to shorelines, rock piles, or submerged weeds in 2 to 6 feet of water. Point the rod tip toward the water. Snap it sharply back three or four times while reeling in slowly to create an erratic, rolling action. Pause several seconds and resume snapping. Be ready for walleyes to strike on the pause.