4 Lessons Learned From a Waterfowl Hunt in Argentina 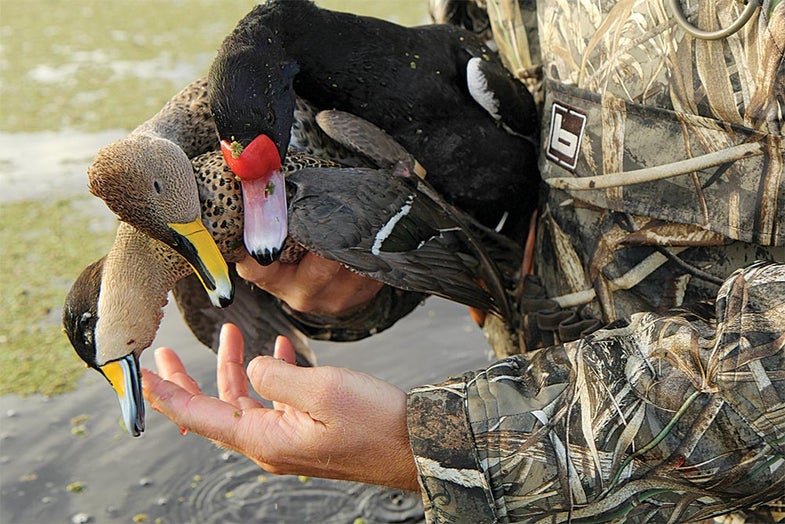 In Argentina, there’s plenty of time for duck empanadas before lunch, a siesta afterward, and one more cerveza before bed. There’s just never enough time to reload. I know ducks are coming, and I frantically fish 23⁄4-inch lead shells out of my wader pocket.

“Rosybills,” says Terry Denmon, owner of Mojo Outdoors, from a few yards down the line. I don’t want to look over the shoulder-high grass and be “that guy” caught pie-facing the ducks—but I can’t stand it. I peek, and there’s a whole flock of backpedaling rosy-billed pochards 20 yards away. If not for the lead shot, unplugged shotguns, and our guide Diego Munoz’s heavy accent, you could mistake the scene for a Louisiana duck marsh.

The familiarity of it all may be the most surprising thing about duck hunting here. After an overnight flight, clearing customs in Buenos Aires, and making do with whatever broken Spanish I could remember from high school, I wasn’t sure what to expect when I got to camp. But I was pleased to find waders drying by a fire, hunters chewing tobacco, a plate full of fried and grilled duck appetizers, and a whiff of Break Free in the air.

Out in the marsh, the birds are a little different, but not enough to notice when they’re working in and your palms are getting sweaty. The showstoppers—the mallards of Argentina—are rosybills. They’re big and noisy and work into decoys just like greenheads, even though they’re divers, closely related to bluebills and canvasbacks. The multiple species of teal here still spring skyward when you shoot into them. Chilean wigeon whistle and laugh and commit from out of the clouds like their American cousins; yellow-billed pintails circle and tantalize, just like a flock of northern sprigs.

I had envisioned pushovers, ducks that we could kill with tennis rackets while standing in the decoys. Nope. They’re easier than public-land birds at home to be sure—and the high limits mean I get to shoot more of them in four days than I’m legally allowed in a month at home. But Argentine ducks are still wonderfully wild and wary, and all that opportunity only reinforces the core fundamentals that I know separate the bona fide duck killers from the sunrise watchers back in the States.

Once the first-day jitters wear off, I realize that even with lead shot—which is indeed a better duck killer than steel—the shots from 30 yards and in have an overwhelmingly higher percentage of dead-on-the-water birds than the longer shots. So I wait for them, and I can’t tell that I miss out on much other than burning extra ammo to finish off wounded birds.

Like seemingly everything else in the American hunting scene, there is a constant quest in the waterfowl world to find the gun, load, and choke that’ll help you shoot a little farther. Yet, the point of all the scouting, decoys, and calling is to get birds close. Yes, you’ll watch some ducks leave by passing on the long shots. I all but guarantee, though, that you’ll kill more ducks per box of shells by holding out for the best opportunities.

At the end of each duck season at home, I’ve relearned the lesson of deliberation when shooting at decoying waterfowl. Shooting big numbers of birds in Argentina reinforces that in spades. Most people know to pick a duck from an incoming flock, but really: You need to pick a duck’s head, same as you’d pick the leading edge of a clay target. Diego does a little shooting with us, and he is among the most talented wingshooters I’ve ever seen—­dropping more than a few birds from the hip. His only advice? “Put it on their heads.”

By the last morning, I’m taking the close shots and staring at beaks before I pull the trigger—and I’m killing ducks like my job depends on it.

Part of the reason I’m here is to test Mojo’s newest spinning-wing decoy, the King Mallard. Like the original Mojo Mallard, this decoy creates flash that is simply a game changer for attracting distant ducks. But just like in the States, it’s not motorized magic for finishing birds. On days when the birds seem wary, we interrupt the hunt to adjust the spread, widen the landing zone, and move the spinner in an effort to get ducks to finish right in front of our gun barrels. Usually, the tactics work.

“A spinner is a long-range attractant,” Denmon tells me. “Use it to get ducks within 100 or 200 yards, where they can see your decoys. But if they don’t want to finish over the top of it, move it. Get it 50 yards out of the spread or tuck it up next to the brush if you need to.”

Ducks have eyesight that rivals a turkey’s, and many hunters don’t give them due credit when building blinds. Even in Argentina—where you can get away with a whole lot more than in the States—ducks that see you will flare instantly. All of our hunting is done standing in knee- to waist-deep water and squatting in marsh grass or behind simple panel blinds. Time and again, when birds won’t finish, Diego steps out into the spread, looks back at the hide, and tells us to tuck deeper into the brush. Same as the guys who go the extra mile cutting brush, digging depressions for layout blinds, and painting their faces at home, that added care almost always makes a difference in getting those close shots we like so much.

Book a duck hunt with Diego Munoz in Las Flores at getducks.com.

We shot the first ducks ever taken over the new Mojo King Mallard during this trip ($170; mojooutdoors.com). The new spinner houses the battery and moving parts inside a compartmentalized box, over the top of which goes a flexible duck “skin” that makes the decoy look like a greenhead. It’s smoother and quieter than the original Mojo Mallard—and I’m betting it’ll work as well at home as it did in Argentina.