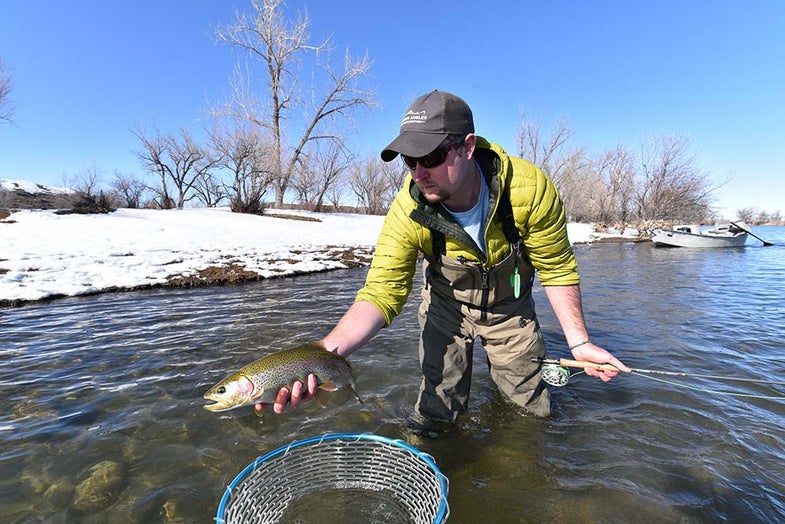 Tailwaters like Montana's Bighorn aren't susceptible to the whims of weather like freestone waterways, and often offer up the hottest fishing during the coldest months. Bighorn Angler
SHARE

One of the reasons I love fly fishing is because it’s a year-round endeavor. Even during the coldest months of the year you can find actively feeding fish, and you don’t have to race to the water hours before sunrise for the best action. Still, too many anglers hang up their waders and stash their rods when winter arrives. They’re all missing out. With fewer lines in the water, winter fishing can mean more opportunities to land big trout, especially from tailwaters. Trout become sluggish as water temperatures drop in freestone streams, but the controlled flows and consistent water temps on tailwaters mean trout stay comfortable and feed all year long. To help point you in the right direction, here are five tailwaters from different corners of the country that are particularly productive through the coldest months of the year. Layer up, get out there, and land some trophy trout.

Because tailwaters are often fish-food factories that can sustain high concentrations of fish, it’s not uncommon to also see high concentrations of anglers lining the banks. That’s why the less-frequented Arkansas tailwater in Southern Colorado is unique compared to the region’s other marquee tailwaters like the Frying Pan. The Arkansas is one of the best winter fisheries in the West, mostly because the river has a prolonged high water season and isn’t an especially productive fishery in the summer months. Come winter, the flows drop, and the bite turns on. It’s not uncommon to consistently hook several 16- to 20-inch rainbows.

The Arkansas drains through a comparatively warm, lower-elevation climate unlike most other trout fisheries in the region. During the winter, the air temperatures are 10- to 15-degrees warmer than other tailwaters on Colorado’s front-range, and 15- to 25-degrees warmer than rivers in the mountains. The relatively mild temperatures combine with well-timed reservoir releases to foster conditions where trout eat year-round and don’t become dormant in the winter. In November and December, blue-winged olives hatch on the surface, giving anglers good dry fly action, and midges hatch throughout the rest of season. Still, in January and February, nymphing is the best tactic to consistently catch fish when there aren’t any visible hatches occurring. “Subtlety is the key,” says Connell O’Grady, a veteran guide at The Drift Fly Shop. “Every time the indicator slows down, set the hook just to see if something is there.”

When anglers think of good trout streams, most might picture a winding waterway in a relatively remote wilderness setting; not a winding river in the heart of the Northeast’s urban corridor. Alas, that’s the setting for the Farmington River—one of Connecticut’s finest trout waters, and at just a two-hour drive from Boston or New York City, it’s likely the most easily accessible fishery on this list.

With a 21-mile long seasonal catch and release stretch that abuts a 6-mile long permanent catch-and-release section, the Farmington has no shortage of public access points during winter. Because of catch-and-release regulations, a high number of rainbows stocked in the fall, and a substantial population of large wild brown trout, there are plenty of targets for cold-weather anglers. The consistent bottom-flow releases from the Saville Dam keep the river at a trout-friendly temperature year-round, so the fish remain active despite the cold air.

The Farmington River has a special winter caddis hatch that starts in December and lasts through February. The hatch, which draws trout to the surface, generally occurs during the morning hours. At other times of the day, slow and deep nymphing tactics work best. Torrey Collins, the manager of UpCountry Sportfishing recommends nymphs, streamers, and “junk flies” like eggs, Woolly Buggers, San Juan Worms, and mop flies (a wiggly, easy-to-tie, sub-surface pattern that incorporates the same microfiber dreadlocks used for real floor mops)—all fished as close to the riverbed as possible.

The intrepid John Wesley Powell started his 1869 journey down the Grand Canyon by floating Utah’s Green River. In the process, he named a particularly colorful stretch of the river the Flaming Gorge. Most of the Flaming Gorge is now submerged in Flaming Gorge Reservoir, but the tailwater below the reservoir’s dam offers vibrant scenery and top-notch fishing. That said, the river’s high trout density and crystal-clear water make the modern-day Green River far being from the untrammeled waterway it was when Powell first drifted it. Today, the Green is a fly-fishing mecca, and hordes of anglers descend upon it in the summer. Yet when fishermen disperse after the fall, you should do the opposite. Take advantage of the decreased pressure and target the river’s trout.

“There are fewer people, better streamer fishing, and good midge and blue-winged olive hatches during the winter,” says Doug Roberts, the owner of Old Moe’s Guide Service. He also recommends not overdoing it with fancy streamers; sculpin patterns and Woolly Buggers work just fine. Unlike the other tailwaters on this list, nymphing isn’t a productive approach on the Green River during this time of the year. Stick to streamers and dries.

While many tailwaters offer only a few miles of good, accessible trout fishing beneath the dams that feed them, the White River in Arkansas boasts a whopping 50 miles of public trout fishing downstream of the Bull Shoals Dam in the northern Ozarks—and with the exception of a few small closures to protect spawning fish, nearly every inch has the potential for holding the trout of a lifetime.

The White River keeps producing big fish when temperatures drop. What makes the winter fishing particularly notable is an immense shad kill in Bull Shoals Lake that happens when sudden cold-water temps knock out a sizeable proportion of reservoir-dwelling shad. The bait drifts into the dam turbines, gets ground up and siphoned into the tailwater, and creates a protein-rich chum that helps trout grow fat and keeps them actively feeding despite the cold water temps.

Again, nymphs, eggs, San Juan Worms, and Woolly Buggers catch the most fish this time of the year, though big streamers and mice patterns fished along the banks are also highly effective. “I’ve fished everywhere, guided in Alaska, and have kids in Montana and Wyoming, but this is the best place I’ve ever fished,” says Jim Lipscomb of Two Rivers Fly Shop.

The tailwater portion of the renowned Bighorn River begins near the town of Fort Smith, Montana—one of the few remaining true trout towns in the country. Here, you can stumble into a shop like the Bighorn Angler with nothing but the shirt on your back, and quickly acquire everything you need (including a rented drift boat) for a great DIY day on the water. The river itself has an unbelievably high population of rainbow and brown trout, and despite the fierce Montana cold, adventurous anglers can catch countless fish in the winter.

“The first part of winter fishes really well,” says Steve Galletta of Bighorn Angler. Because the seasonal turnover in Bighorn Lake is such a long and slow process, water temperatures stay relatively warm for miles downstream of the Yellowtail Dam release compared to the state’s freestone streams. December is the best time for anglers to get out on the water, though good fishing extends throughout the rest of the season. Target trout congregating in deep runs with a standard sow bug and nymph rig. The fish will also sidle up to the edges of the waterway during midge hatches, which sporadically occur through the winter. Finally, there’s particularly good streamer fishing for post-spawn browns in February.