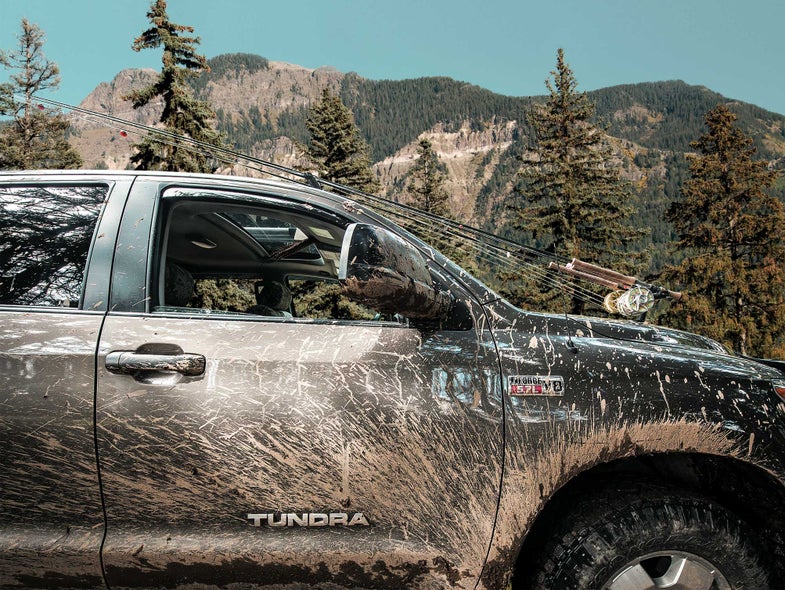 This Rocky Mountain road trip crisscrosses the Great Divide, highlighting the world-class ­fishing that can be found on rivers flowing both east and west

Strike Gold
Lace up your hikers and make the lung-burning trek to one of the many alpine lakes in the Wind River Range that hold big golden trout. Hotspots are tightly held secrets among local anglers, but the Pine Creek Drainage is an excellent place to start your search for gold.

High Steaks
It may be cowboy kitsch, but don’t miss the traditional Western cookout at Pinedale’s Pitchfork Fondue. Hosts Matt and Liz David skewer Wyoming sirloin steaks and dip them in a vat of boiling oil until fried to your liking. Tea and lemonade are also provided, but anything harder is BYOB.

A Grand View
With the Tetons rising high above, it’s easy to get distracted by the scenery while floating the Snake River north of Jackson. If you can focus on the fishing, you’ll be rewarded with big brown trout and native finespot cutthroats, which feed aggressively on the surface starting in midsummer. Check in with Grand Teton Fly Fishing for river conditions, fly recommendations, and half- or full-day guided trips.

Scenic Route
From here, the itinerary takes you through Yellowstone National Park, home to spouting geysers, bubbling mudholes, and any number of otherworldly attractions begging for attention—not to mention some great fishing just off the highway. If nothing else, rinse off the road-trip rank with a quick dip in the Firehole River.

Flooded Forests
In 1959, a massive landslide briefly dammed the Madison River and formed the deep, still waters now known as Earthquake Lake. The stubby fingers of pine trees reach from the surface and provide fishy cover for an abundant trout population—and rumor has it, there are some truly giant browns in the lake. For the best opportunity at landing a local legend, drop a small dry fly among the flooded timber at dusk. Hot Fly: Baetis Sparkle Dun

The Big Time
You’ll pass a lot of amazing trout water on your way to Divide, Mont., but the iconic Big Hole River is worth waiting for. Mid June typically marks a big salmonfly hatch on the river with trophy trout feasting on the bugs. If the salmonflies aren’t hatching, however, roll a Bitch Creek or Kaufmann’s along the bottom near heavy cover to target the biggest of the Big Hole’s browns.

One Last Cast
With 12 great-tasting beers on tap, including several local brews, Mac’s Last Cast in Dillon is the perfect watering hole to cap off your road trip. Opt for something from Montana’s Philipsburg Brewery, such as the crowd-­favorite Haybag Hefewizen.

This four-state drive hits some of the Southwest’s hottest waters, with a couple of sightseeing side trips thrown in for kicks

Fly Guys
Since the early ’80s, Duranglers has been the region’s go-to fly shop, and few people hold more local knowledge than cofounders John Flick and Tom Knopick. The staff here will clue you in on what’s biting where—but don’t expect them to spill all their secrets from behind the counter. Instead, book a guide for a day on the Gold Medal Animas River.

Local Flavor
If you’re looking for a little local color, you can’t do much better than stopping inside Blondies Trophy Room in Cortez, Colo. Grab a cold beer and the bar’s famous 4-H Burger, which tops a beef patty with cheddar, sauerkraut, and a grilled kielbasa. Stay too late and you will probably need something to steady your casting arm the next morning. If that’s the case, there’s no better remedy in town than the Wake and Bacon Bagel and a coffee from the Pie Maker.

Cutt to the Chase
The Dolores River can get crowded during peak season, especially the lower section. Solitude-seeking anglers should sneak away to the river’s upper reaches and its many feeder streams. Stoner Creek, in particular, provides an excellent fishery for beautiful Colorado River cutthroats. From the Twin Springs trailhead, head down into the canyon to access the creek’s trout-filled pocket waters. Hot Fly: Potter’s Fathead Moth.

Cliff Dive
While you’re here, don’t miss Mesa Verde National Park just east of Cortez. Crash at Morefield Campground, just inside the gates, then get up at dawn to catch a ranger-led tour of the amazing ancient architecture hidden high on the cliff walls.

Two for One
McPhee Reservoir, Colorado’s ­second-​largest lake, is unique in that it offers both a warm- and coldwater fishery. Smallmouth bass, rainbow trout, and even kokanee salmon swim in abundance here. The hard-fighting smallmouth bass grow to 2 pounds or better and regularly smash Yum Crawbugs tossed into the rocks up House Creek arm.

Right to the Corner
Point your road trip vehicle down Highway 491 south out of Cortez, then head west on 160 for a slight detour to Four Corners. Make like a tourist, and snap a quick selfie at the exact point where Arizona, Colorado, New Mexico, and Utah come together. After posting the pic on Instagram, haul ass east toward Farmington and the legendary San Juan River.

Honest Abe
Construction started on Navajo Dam in 1957, and the next year Abe Cortez opened up a motel and café. Abe’s Motel and Fly Shop is now an area institution on the San Juan River, where local guides and flyfishermen gather to share info and tell tales about the river’s world-class trout fishing. Most of the rooms are equipped with a kitchenette, but don’t miss the café’s Mary Jane breakfast burrito smothered in homemade red chili.

A trip to the beach is the classic summer vacation, and this route along the sea has it all—sun, sand, surf, and some of the mid-Atlantic’s best fishing

Flounder Around
Stop by Captain Steve’s on Chincoteague Island for some bucktails and a bucket of minnows—the preferred combo for the inlet’s keeper flounder. As spring turns to summer, trout, sea bass, and croakers add to the bag. Bring a rake, too, as Tom’s Cove is a popular spot to dig up a pail of clams for a beach bake.

Fish Camp
Just a short drive down Virginia’s Eastern Shore, Kiptopeke State Park provides a quiet place to camp for the night. But don’t expect to get much sleep; the fishing pier here is lighted and the night bite for flounder can be spectacular. Pick up bait and pay a $3 access fee at the camp store.

Cite Fishing
By Memorial Day, citation-size cobia—those measuring at least 50 inches or 55 pounds—start showing up in Chesapeake Bay. For your best chance at a June trophy fish, put down a chum slick in shallow water like what you’ll find at Grandview, the Rock Pile, or Latimer Shoals. Live eels and cut bunker are the preferred baits, fished on the bottom with a sliding sinker rig.

Take Flight
Before you hit the beach, stop by the Wright Brothers National Memorial for a quick history lesson. As you feel the ever present breeze by the towering dunes of Kill Devil Hills, you’ll understand why Orville and Wilbur picked the spot to take their first flight.

Bank Shots
From Nag’s Head to Cape Hatteras, North Carolina’s Outer Banks offer more than 50 miles of white sand and rolling surf in which to cast a line. A No. 2 Hopkins No=Eql or 3⁄4-ounce Kastmaster spoon ripped through the breakers at dawn often elicits violent strikes from the bluefish and Spanish mackerel you’ll find beachside in the summer months.

Inside Passage
Several launch sites from Kitty Hawk down to Roanoke offer kayak anglers access to the skinny water that lines the inside of islands. Here, the abundant marshes and small cuts hold speckled trout, puppy drum, and flounder. Use a medium-action spinning rod to search the shallows with a Berkley Gulp Shrimp or Swimming Mullet threaded on a 1⁄2-​ounce jig.

In the Raw
Pop’s Raw Bar is the hotspot on Hatteras—literally. The local favorite caught fire last fall but has since reopened and serves some of the best seafood and coldest beer around. Pile up a platter with steamed peelers or go for the famous Three from the Sea with clam strips, shrimp, and scallops. 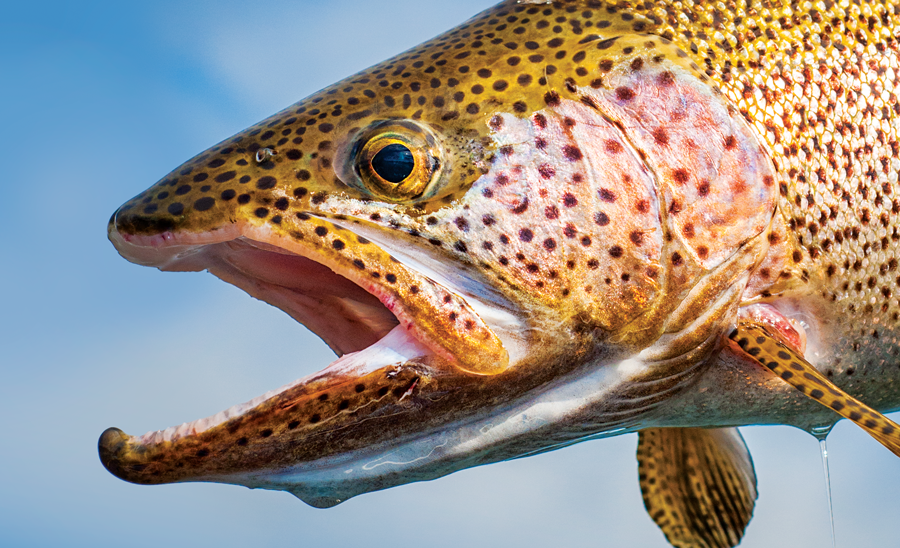 We’ve found the 100 greatest spots to catch fish, camp, and have a blast. Start making your plans now!