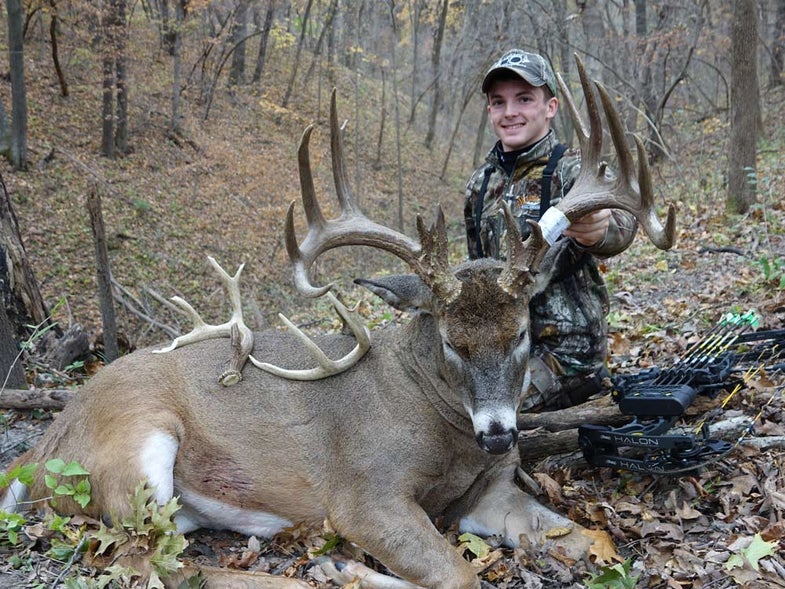 Iowa bowhunter Colton Milosevich with the 190-inch giant that he killed on his 60-acre farm.

Sixty acres can be enough land to manage for really big deer. Just ask 21-year-old Colton Milosevich who, in late October, killed a 190-inch buck on his 60-acre farm in Dallas County, Iowa. Milosevich followed two simple rules for success: work hard on habitat and food plots, and only shoot bucks that are five years old or older, regardless of antler size.

He stretched that second rule in 2016. Milosevich had been watching this deer—nicknamed “Bucktucky”—grow over the course of three seasons. Even though the buck would’ve likely scored 160 as a 5-year-old, Milosevich passed him up ten times. He was confident the deer would make another huge jump up in antler size the next year.

Still, it was a gamble. Other hunters in the area knew about the deer, and several were trying to put their tag on him. But “Bucktucky” moved into Milosevich’s slice of whitetail heaven, where the hunter was finally able to shoot him at 8:15 on October 29.

Milosevich first saw Bucktucky as a 3-year-old. With a split G2, he knew the deer could become a trophy some day. “I was impressed by the mass he had for his age,” Milosevich says. Blame his ex-girlfriend for the goofy name. “I was naming so many bucks I had run out of names,” he says. “I asked her for one and she tossed out ‘Bucktucky.’” It stuck.

Milosevich has been hunting since he was five years old, mentored by his father, Brad, and his grandfather, Robert. He killed his first buck at age 7, and a wild hog that same year. He was hooked after that. But neither of his mentors bowhunted. Milosevich picked up archery on his own in high school and soon became “super serious” about bowhunting.

He credits his grandfather, however, for inspiring him to be a deer manager. “He owned the [60-acre] farm I hunt,” says Milosevich. “It meant a lot to me that he stopped renting out the tillable acres and gave up that income so he and I could manage habitat and plant food plots.” Milosevich also learned to plant native grasses for bedding areas, and how to selectively cut trees to thicken up the forest floor.

He spotted Bucktucky several times during the 2014, 2015, and 2016 seasons. The buck was a traveler. Milosevich had pictures of him on his farm and on a neighbor’s place two miles away. A friend who lived half a mile past the neighbor found Bucktucky’s shed antlers in 2016.

Despite his wanderings, Bucktucky spent enough time on Milosevich’s farm in 2016 that he saw the deer numerous times. He rattled him in twice, once to the same stand where he would ultimately kill him in 2017. “He had the potential to make a big jump in score if he survived the season,” says Milosevich, who was hunting a different buck that year. “So each time he gave me a chance, I let him walk.”

During the late muzzleloader season, Milosevich saw Bucktucky every afternoon that he hunted. His grandfather even passed on the buck one evening, even though it would’ve been the biggest deer of his life. “I was tempted to tell him to shoot it. But he looked at the buck, and said he wanted to let him grow one more season,” Milosevich says.

After another hunter killed the other buck that Milosevich was after, he filled his 2016 tag with a management deer, a short-racked 8-pointer that scored around 130. “Bucktucky was in the field when I shot the 8-pointer, and he was 30 or 40 inches bigger than the 8,” he says.

The 2016 season came to an end, and unfortunately Colton’s grandfather, Robert, passed away. Colton wanted to continue the campaign with Bucktucky more than ever. He waited patiently for the deer to show up on camera in the summer of 2017. As bow season neared, he began to get nervous. “Every other summer I had gotten pictures of him, but I didn’t in 2017,” he says. “I was afraid someone else must have shot him during late muzzleloader season. It was a long summer.”

To Milosevich’s relief, he finally got a trail camera photo of Bucktucky in September. His rack was huge, and even better, he seemed to have narrowed his range. He wasn’t showing up anywhere but the Milosevich farm. Colton began tightening the noose. “I didn’t want to push him, so I left cameras around the edges at first. As I started to figure out where he was bedding, I moved cameras closer, but I still put them where I could get in and out easily without leaving too much scent,” he says.

Milosevich is pursuing an education degree at Simpson University. He’s also a member of the wrestling team. Free time in the fall is limited, but with no wrestling practice on Saturday, October 28, he decided to go hunting. After a slow morning, he climbed down early to check cameras. He found two pictures of Bucktucky: one taken five minutes into legal light near a bedding area, and the other 300 yards away. He already had a stand set between those two spots. The trap was set.

Excited as he was, Milosevich didn’t hunt that stand in the afternoon. “My friend asked if I was going to hunt that evening. I told him no, that I didn’t want to bump him. I’d kill him the next morning.” But he almost missed the bell. “I must’ve hit snooze four times the next morning. I was worn out from a week of hard wrestling practices,” he says. As it was, he got to the woods late, bumping several deer on the way in. “I was afraid I had blown it. I almost stopped short and hunted a close stand 20 yards from where I bumped the deer, but I was committed. I went 150 yards to my stand and got in it about 15 minutes before shooting time,” he says.

Deer started coming by the stand at first light. Two younger bucks passed and kept going. Then a 6-year-old buck Milosevich had named “Tight Racked 10” appeared. Milosevich had last seen that deer during one of his final hunts with his grandfather. “I was reminiscing about that hunt as I watched the deer come in. He had his nose to the ground as if he was trailing a doe. He made a scrape, two rubs, then another scrape 50 yards behind my stand,” he says. Three more bucks appeared, and soon Milosevich had five deer 50 yards behind him, three making scrapes, the other two fighting.

“It was a calm morning. The racket from the fight really carried,” says Milosevich, “I was thinking, ‘Bucktucky’s got to hear that, and he’ll come see what’s going on.’” A minute later, as if on cue, Bucktucky appeared, ears tucked back and fur bristling. The other deer wanted no part of the big whitetail and ran off. The moment of truth was getting close.

“There wasn’t much wind, but it was coming from the worst possible direction, straight from me to him,” says Milosevich, “Usually when a mature deer comes at you from straight downwind you’re busted. The rising morning thermals must have helped me.”

The deer turned, as if to follow in the direction the other bucks had gone. Before Milosevich could grunt to turn him back, Bucktucky spun around and came toward his stand. “He walked to the base of my tree, grunting the whole way,” says Milosevich, “My heart was pounding because I didn’t know which side of the tree he would cross on. I was making a racket trying to get turned the right way, but he didn’t hear me. He didn’t hear me draw, either. He was walking slowly as he came by so I didn’t grunt to stop him. I just shot.”

The range was no more than 10 yards, and the hit looked perfect. But the buck ran 20 yards and stopped, bleeding heavily. Milosevich almost shot again, but the deer snorted and ran another 40 yards before walking out of sight.

Although Milosevich knew the buck was hurt, he waited an hour and a half. The footage on his bow-mounted Tactacam showed a good hit, but Milosevich waited for his father to get home before starting the search, eight hours later. They began following the blood trail, which was initially good—but it soon dwindled to a few drops. “You had to crawl on your hands and knees to find blood,” he says. “We didn’t find him anywhere along the ridge where I thought he would be. We followed the blood to the bottom of a ravine and found his bed. And we jumped a deer as we were looking.”

The track became even more difficult after that, and they considered backing out until the following morning. “I was still on my hands and knees looking when Dad went up the hill to get an idea of where we should start the next day,” says Milosevich, “I was feeling low and thinking we were going to lose him when Dad shouted, ‘I found him!’”

That deer they had seen running away, uphill, was Bucktucky. He had died in mid-stride just outside his bedding area. With a slightly quartering-to shot, the arrow had passed through one lung and the liver.

The buck Milosevich had watched grow for so long had tremendous mass and 18 scoreable points that roughed 192 5/8 the first time they measured him; 189 the second. Currently the rack is drying before it can be scored officially. But Milosevich isn’t too concerned with exact figure. “I tell people 190 when they ask about the score,” he says, “but for me, this is my deer of a lifetime. The chances of growing and harvesting another this big on this farm are slim.”

For now, he says he’ll take friends and kids hunting, and follow his father’s beagles after rabbits this winter. Next year, he’ll look up the Tight Racked 10 he last saw with his grandfather.