Score more brooks, browns, and rainbows this season with these tips in your arsenal

From the Colorado to Maine, Wisconsin to Georgia, trout all behave the same way. How, when, and where they feed is highly predictable. Learning how to catch them on a fly rod, however, goes beyond simply knowing where to find the fish. The eight must-have skills outlined here will get you primed and ready for every aspect of the trout game, from how what to feed them, to how to set the hook, to how to glean valuable information from fellow anglers and more. 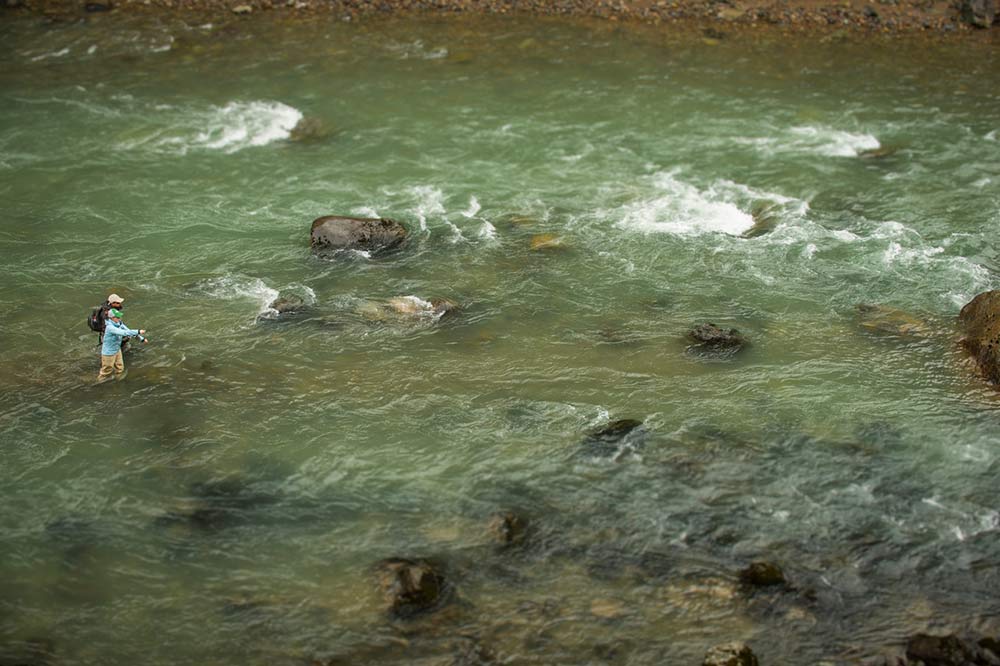 This is probably the most important skill for river anglers the world over. Do you know what a riffle, eddy, tailout, run, and pool is? If not, learn them, as fish utilize these spots for a multitude of different reasons and move from one to the other at different times of year and times of day. Trout are lazy creatures that utilize rocks, currents, and eddies to hide in ambush and wait for food. Start paying attention to where you saw that last fish eat and why it might have been there. Talk to fellow anglers and ask where they’ve been catching fish. Most importantly just sit for a while and watch the water. It’s amazing how much you can learn if you just slow down and pay attention without throwing a line. 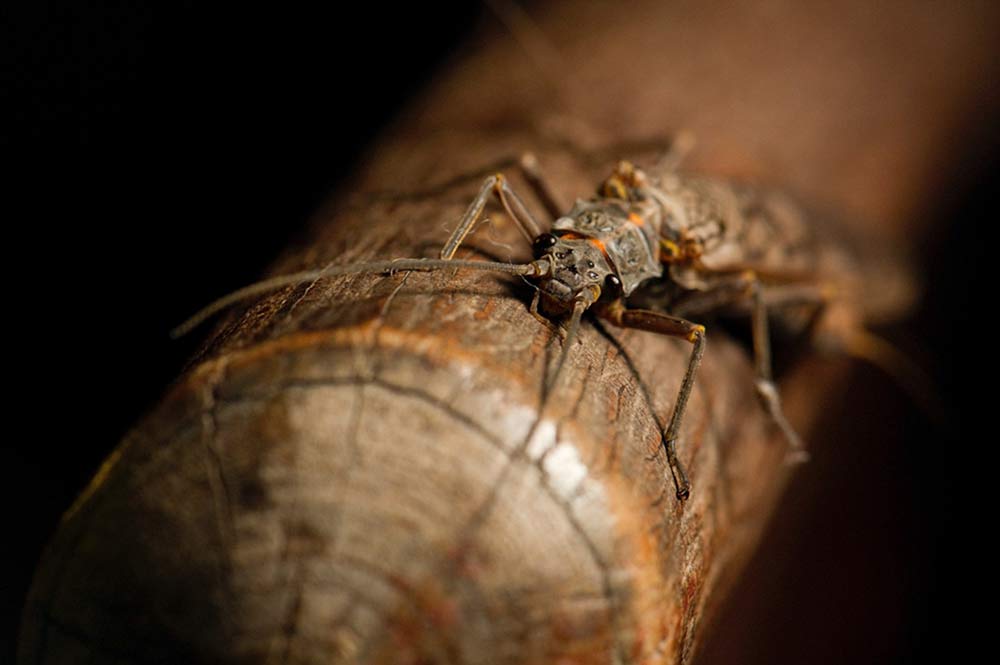 While fish eat everything from snakes to birds and mice, most trout concentrate on aquatic insects, small baitfish, and crustaceans. Do yourself a favor and learn the life cycle of the major players in the aquatic insect world and you’ll be catching more fish immediately. They are mayflies, caddisflies, midges, and stoneflies. The recently republished book Selective Trout is an excellent resource for this information. Terrestrial (which means land based) insects like beetles, ants, and grasshoppers are also important food sources for trout, especially in late summer and early fall when they tend to be more abundant than many water-born insects. 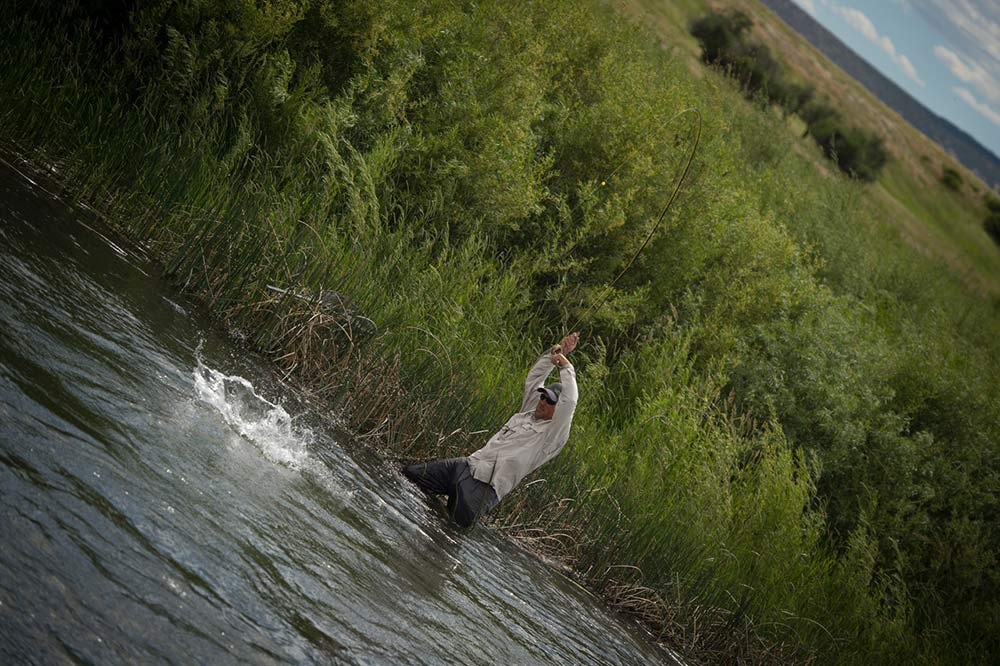 After a big fish is hooked, don’t feel like you need to land it quickly. While a shorter fight time is always better for the fish, when dealing with larger fish or heavy current, you have to strike a balance between a safe fight time and smart fighting technique . Allow the fish to run a little; it’s a practiced skill of give and take with precise drag settings, but putting the heat on the fish too early is almost always a sure way to lose it. Practice using a 45 degree angle or less with the rod and keep your tip high, letting the rod absorb the pressure. As the fish gets closer and more worn out, transfer that rod to a sideways angle, increase pressure, and bring the fish in quickly. Remember to extend your arm and let them run if needed when a fish gets a burst of energy close to the net. 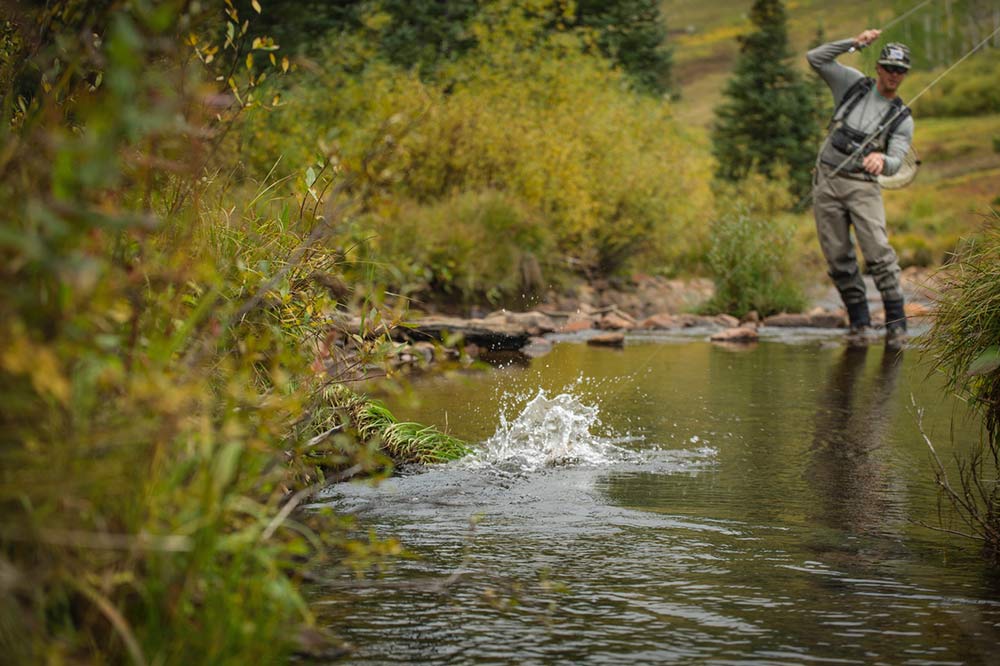 Learn When To “Trout Set” And When To Strip Set

Learn When To “Trout Set” And When To Strip Set

Trout are often the first species of fish fly anglers catch, and they learn that setting a hook on them—especially when using a dry fly—requires quickly and smoothly lifting the rod straight up. The problem is that this method doesn’t work when switching to streamers. When working flies subsurface, a lift upon the strike will usually cost you the fish. In this scenario, you’ve got to strip set with the rod low and pointed directly at the fish. When the fish eats, just strip one or maybe two more times and the fish should be hooked. After a solid strip set, then you can lift the rod to fight the trout. 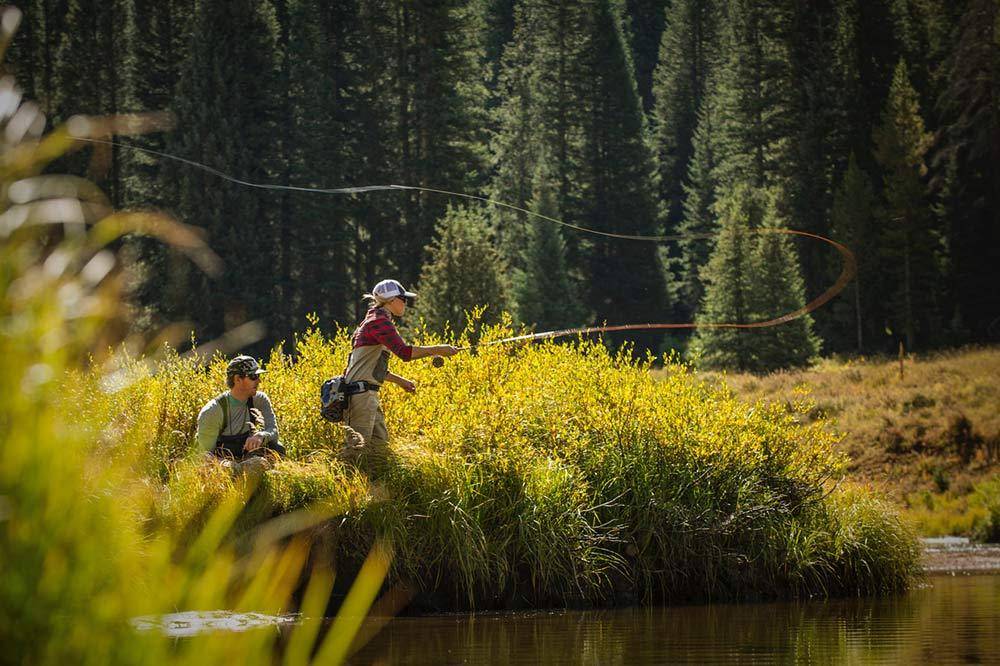 Wade Only When You Have To

Wade Only When You Have To

Almost everyone is guilty of getting overly excited as soon as you get to the river and wading right in to that first juicy run. The fact is, you probably spooked trout between you and that run. Learn to cool your jets a little when you hit the river. When you lock your sights on a prime piece of water, fish your way to it instead of wading right to it. You’ll be shocked at how many more trout you catch. 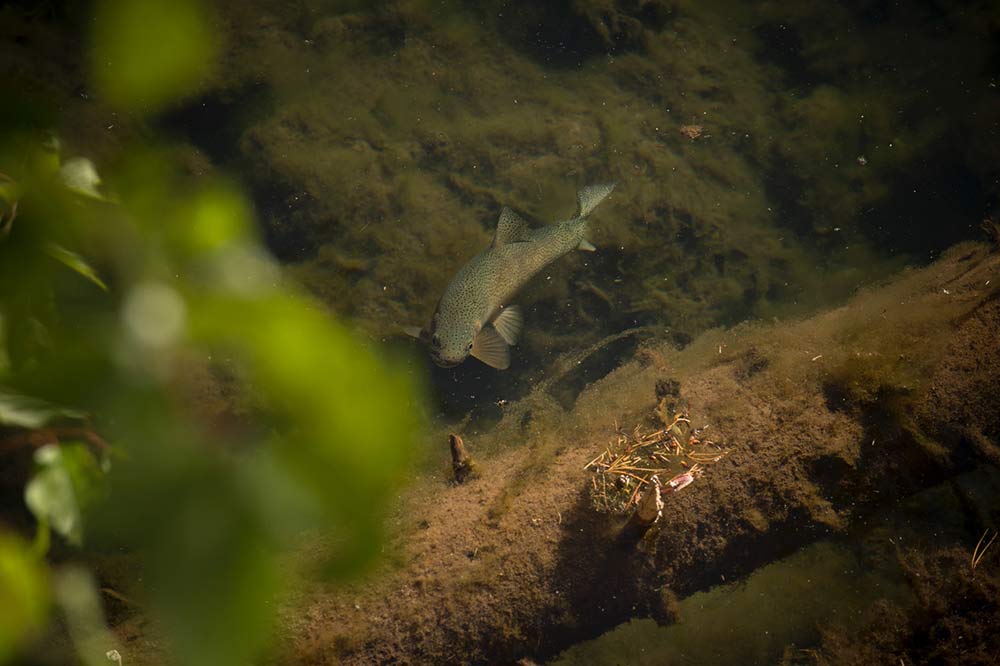 After eying a feeding fish don’t immediately cast to it. I know, it’s tempting, but instead, stay calm, still, and quiet and watch what it’s doing for a moment. Take note of the timing of it’s eats above or below the water and drop the fly at the right time. 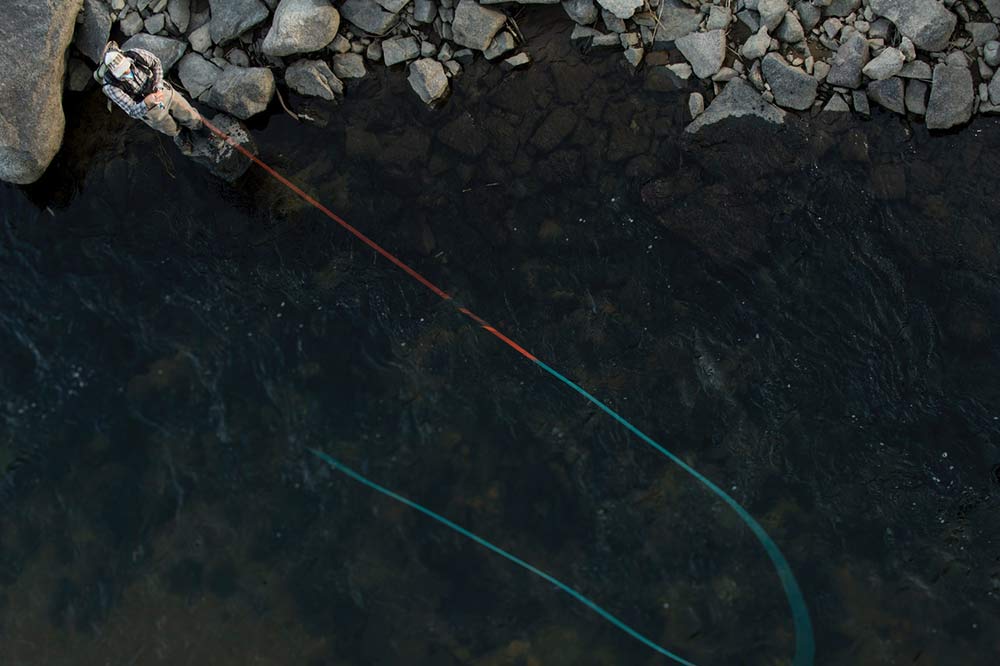 Many situations on rivers command that you to fish upstream to stay stealthy or get a proper presentation, but there are reasons to fish downstream beyond when you’re swinging streamers. One of the most important is facing complicated currents that will not allow you to get a drag free drift of your bugs from upstream. When this happens, simply give the fish’s lie a wide birth as you walk upstream and cast way above the fish with a slack line cast. Stop the rod at the end of the cast and give a slight wiggle which will throw “elbows” or bends into your line, letting it drift drag-free into the fish’s face. 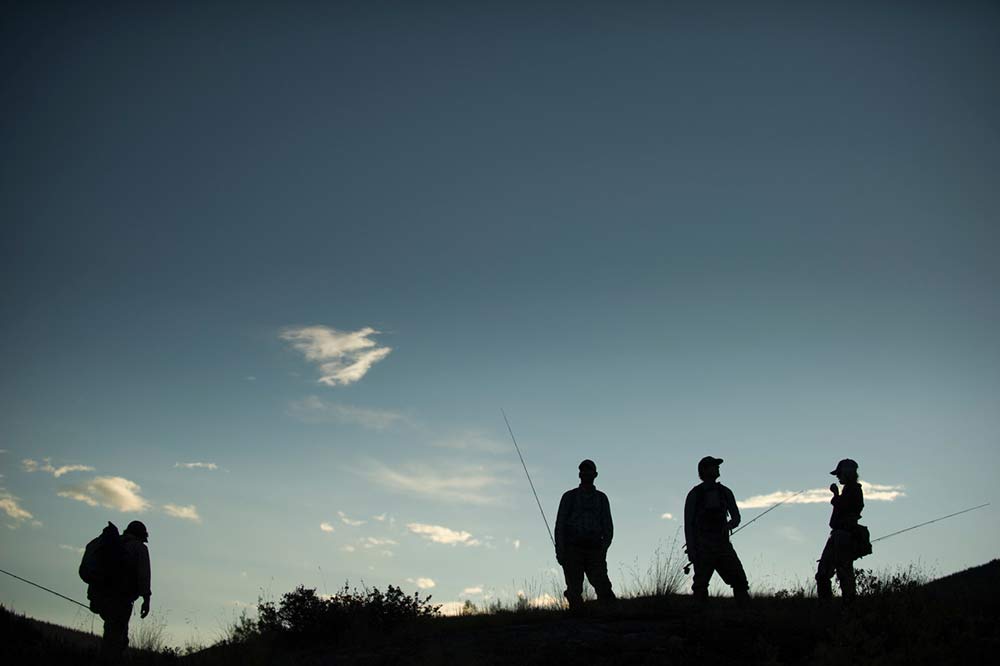 Last But Not Least, Learn Some Manners

Last But Not Least, Learn Some Manners

For whatever reason this skill can be hard for some folks to master. It’s not only about being respectful, but it can help your fishing in a major way. To sum it up plainly , be vocal with other anglers and give a wide birth. Ask if they plan on fishing up or down stream. Which way did they come around the lake? How did they do in that hole they just fished. It’s not about being nosey, but about increasing your odds of better fishing if your not beating up water that’s just been fished. The opposite holds true as well. Perhaps tell them what you’ve just fished and where you plan on heading or stopping. If anglers in close proximity know each other’s plans, everyone has a better day fishing.