8 Tips for Flyfishing During the Spring Runoff

Start plucking big fish out of murky water while other anglers are still at home, waiting for conditions to clear 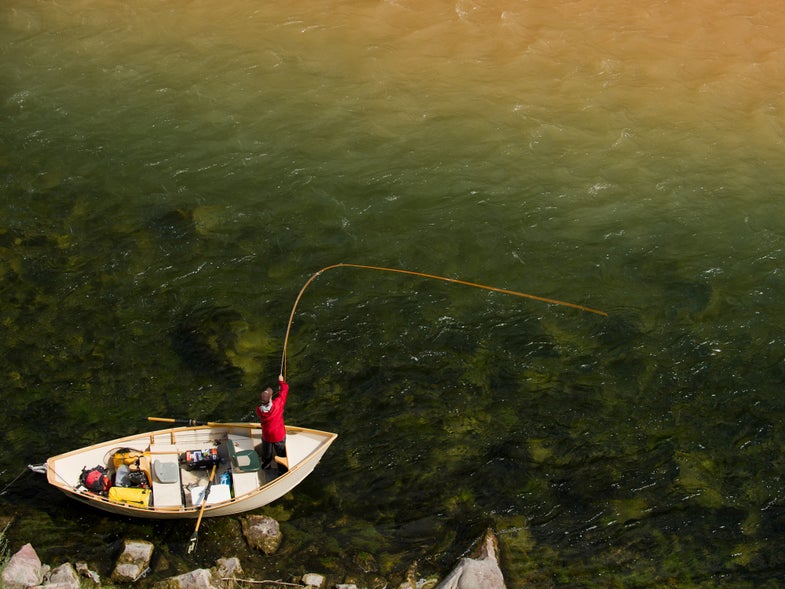 Spring runoff scares many anglers into not fishing. Sure, high, off-color rivers can be confusing and hard to read, but fish are still biting in these conditions. Plus, you might even have the whole stream to yourself. By making a few adjustments to your tactics, you can start plucking big fish out of murky water, while other anglers are still cooped up at home, waiting for their favorite hotspot to clear.

At West Point, cadets are told to “embrace the suck,” meaning to welcome whatever wretched situation in which they find themselves. A similar thought applies to fishing runoff. The toughest part is the mind game. Showing up to a river that looks like chocolate milk can be discouraging, but if you commit to embracing it, you can have a blockbuster day. Just keep telling yourself: Muddy water doesn’t mean no fish. Because, in fact, many times you can land big fish that would otherwise be spooked in clearer conditions.

Runoff often means not only dirty water but also a much higher volume of water, so don’t be surprised if your favorite riffle or run is totally washed out. Concentrate instead on soft, slow eddies along banks and in side channels, or find pieces of water that are protected from high flows. Fish will seek out these spots to rest and to feed in much higher numbers than they will later in the season.

When choosing flies, go for bugs that are bright and a little gaudy so that fish can differentiate them in the sea of murk. Try black, chartreuse, purple, red, or white patterns, especially ones with a bit of sparkle to catch the eye of a holding trout. I’ve found purple Prince nymphs (shown) work well when bounced off the bottom in slow eddies. Many anglers break out splashy streamers, too, such as a Zonker, Rooster Tail, or Double Bunny. Go the extra step by adding rattles to your streamer, or any addon that will draw attention to the bug.

Your tiny winter offerings aren’t gonna cut the mustard during the springtime melt. Not only will some flash grab a fish’s attention, but big flies will also up your odds of hooking a wall-hanger in high, cloudy water. Jumbo streamers, such as those mentioned above, no doubt work well, but also try a Pat’s Rubber Leg, or any big stonefly for that matter.

In spring, dams tend to let out a large volume of water to make room for the snowmelt, and typically their tailwaters aren’t as dirty as many freestone rivers. At least not for the first few miles. Tailwaters’ high flows can get fish moving in the early season, too, so if your favorite piece of river is blown out, jump ship and target these stretches instead.

When fishing big, buggy streamers, dead drift them like you would a nymph. I like to dead drift a streamer through a run, then, toward the end of the presentation, slowly strip and jig it straight up. I like John Barr’s Meat Whistle from Umpqua when using this tactic, since the jig head has great motion. But, regardless of which pattern you try, make sure to take your time and fish it slowly.

Pay attention to the temperature and rain the day and night prior to hitting the water. Many folks don’t realize that runoff flows are cyclical. Typically, peak flows are brought on by snowmelt that slowly comes down as a hot afternoon wears on, and continues throughout the night and into the next day. So, if it’s been particularly hot, or if you’ve received a lot of rainfall, consider postponing your outing for a couple of days. Check the gauging stations for your local honey holes to see whether you can spot a declining flow trend. Once the water lowers again, then it’s go time.

Lastly, venture outside the box in terms of location—and that may mean bypassing your favorite river altogether. Many times in early spring, high mountain lakes have just iced off, and their fish are hungry. When you’re fishing these still-water lakes, a medium-sinking line will help get your fly deep, where trout may be hanging out, and prevent hang ups during retrieves. Trout like to cruise near shore in these mountain lakes, too, so don’t forget to cast parallel to the bank. While these still waters may require a trek to reach, they’ll likely be fishable even when your home waters are fully blown.

RELATED: 10 Common Flyfishing Mistakes (and How to Fix Them)