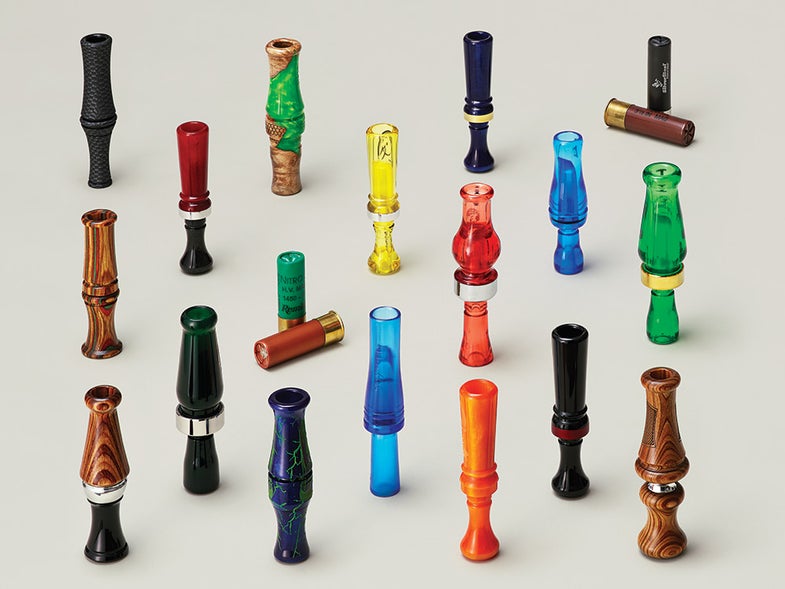 You can make noise on a call. A quack. A honk. A cluck. Like most hunters, you’re just skilled enough to get some passing ducks and geese to look at your spread. But also like most waterfowlers, you’ve never put in the time to truly master the art. The best callers don’t just win contests. They shine in the field, too, coaxing migrating geese from on high and turning wary ducks with just the right note. To improve your routine this fall, we asked four champion callers to share their best advice for hunters who can blow a call—but want to do it better.

Get Control
Perfect air control separates great callers from the good ones [see theart​of​flight​­control.com]. A great caller can vary his tempo, tone, and volume to sound like multiple ducks and to be able to work them closer into the decoys without spooking them.

Stop Grunting
Probably 90 percent of the younger callers I teach do not maintain their airway in an open position—and I was guilty of it myself when I was younger. They bring the air up from the diaphragm in proper pressurized form, but they tighten up in the throat, constricting the larynx. Many grunt or growl into the call, which is incorrect. You must keep the airway relaxed and open to be able to produce proper duck sounds. Break those habits, and your ability will improve rapidly.

Act and React
Know the difference between reactive calling, or hitting passing ducks with a sound to alter their flight pattern, versus confidence calling, where you have working ducks interested in your spread and you need to keep them that way.

Check Your Head
Some days, ducks love aggressive calling and want to be called all the way to the water. But on other days, they will flare away from your call. Even a world champion shouldn’t be too proud to put his call down if needed.

Think Beyond the Cluck
The train, the turkey, and the spit note are advanced sounds. They are deadly on geese that have heard all the regular routines and need something different. I use them all the time. The nasty guttural sounds of a train mimic that of a goose on the ground, and turkey and spit notes sound like birds coming in to land. I’ve seen these sounds make pressured geese fully commit on days when hunting is tough.

Raise a Racket
On nasty-weather days and days when migrating geese are showing up, flying high out of the north, you can often call hard and loud to get geese to commit. Make them think there’s something special going on in your spread. They are usually tired and looking for refuge and are easy to work.

Call on Location
Hunting a loafing pond is going to be different from hunting a cut cornfield. Loafing birds will generally just honk and moan, and you should do the same. But in a cut cornfield, the birds will be feeding and making more noise. Opt for faster, more aggressive sounds.

Speak Softly
Sometimes you have to be quiet. If geese are right above you and you’re blowing their ears out, they won’t decoy. Being able to slow down or speed up is easy, but being able to cover the call just right to soften the sound is crucial.

Be a Savvy Shopper
Don’t discount a new call if you don’t like it the first time you try it. Many call companies are happy to work with you on tuning until a call perfectly matches your particular style.

R.J. Dick tunes every call on his lanyard. Here are his steps to get the most natural sounds from a factory short-reed goose call.

1. Place the reed on the tone board so the tip is even with the front of the tone channel. Make sure it’s far enough forward that it won’t snag on the edge of the opening. The reed should be able to press flush into the tone channel.

2. The wedge can be placed at different areas on the reed to produce different sounds. A good place to start is aligning the front of the wedge with where the edges of the reed start to taper. Some goose-call guts also have lines on the tone board marking where the wedge can go.

3. To raise the call’s pitch, shorten the reed by placing the wedge closer to the front of the tone board. To make it deeper, do the opposite.

4. The farther you push the guts into a call, the softer it will blow. Guts pushed in just enough to keep them secure will blow much stiffer. —D.D.

Follow Their Lead
If ducks are vocal, you can be vocal. If it’s late in the season and they’re pairing up, I usually only use soft quacks and chatter as confidence calls, because pairs aren’t real vocal. But every day is different. Paying attention to what the birds are doing and how they’re reacting to your calls will make you a much better caller and more successful hunter.

Get Loud and Clear
When the skies are clear, you can usually call louder. But if it’s foggy or humid, the volume almost has a weight to it. Ducks seem to be very temperamental then and respond best to softer sounds.

Keep an Ear to the Air
Listen carefully to as many good callers and live ducks as you can, and try to replicate the sounds that you hear. Even if you don’t use them in the field every day, the more sounds you are capable of making, the more versatile you will become.

Seal the Real Deal
The best contest callers are usually hunters who can apply realism to a structured calling routine on stage. A contest caller that doesn’t hunt much frequently lacks the realism that top-level callers have because they haven’t listened to as many live ducks.

Be a Chatterbox
Content ducks chatter quite a bit. I chatter a lot when ducks are working to keep them from pulling off and joining other birds, and when I need to turn them back toward the spread.

Kill the Speed
Increased calling speed is a reliable attention getter if I really need to turn ducks, call them off other birds, or break high fliers down for a closer look.

READ NEXT: THE WATERFOWL FRONTIER

Walk the Edge
Usually, if you try to call specklebellies all the way to the hole, they’ll either lose interest or pinpoint that it’s a hunter making the sounds and flare. I like to get their attention, then call just enough to keep them on track. Never call when they are directly over your blinds, or if they can see you when they get behind you. Hit them on the edges instead.

Be Aggressive
When geese aren’t giving it up for the basic yodels, I like to hit them with an aggressive murmur. It sounds something like a beehive, and specks make the sound constantly when they’re on the ground. To make it, put your lips together and blow air from short bursts to longer wavering bursts. Vibrating your lips like this will take some getting used to, but it’s a deadly sound.

Listen and Learn
The louder, chattier, and faster the birds are on the approach, the happier they are with the setup. You’re probably about to get a good shot. But silent and slow birds are usually telling you they are nervous and are looking and listening for danger.

Get the Hiccups
I’ve called many specks in with just the hiccup. To make this sound, say ticka-tick into the call, just like ticka-ticka-ticka used to make a feeding sound on a duck call, but abbreviated to just two notes.

Control the Traffic
When you’re working specks, your call isn’t there to create background noise. You are using it as a tool to bend and twist birds around to you. Watch the flock’s body language closely. When working birds move their feet, wings, and heads, it’s your cue that they either like—or don’t like—what they’re hearing.

Louisiana Style
Their squeaky finish is designed to fool ducks that have heard it all—and they’re the call of choice for making the “Cajun squeal” end note. To capture that sound, add extra air pressure at the end of each quack as you bite down, or make a chewing motion with your teeth.

Cutdown
The ability to blow a cutdown call is like a secret handshake into a shadowy world of hardcore duck hunters. Descendants of P.S. Olt’s original D-2, these calls are known for ringing volume and deep rasp. To make a cutdown bark, push steady air from your diaphragm and cut each note off with your tongue. Plan on hours of light-headed practice before getting it right.

Short-Reed
These calls dominate both on stage and in the field. With a short-reed, you’re able to reproduce nearly every vocalization a goose makes. Master the cluck and double-cluck, then move on to the quick spit note, which can turn call-shy flocks back to you on a dime. As the name suggests, make like you’re spitting into the call with a combination of air pressure and tongue movement to get a fast tuh-who sound. —D.D.

→ Guts Check: What Makes a Call

1. Insert: This wood or acrylic stopper plugs into the barrel and, along with the wedge or block, holds the reed in place over the tone board.

2. Tone Board: Almost always curved in modern calls, tone boards do vary in length and size of the channel carved into them. How the reed vibrates against the tone board affects the call’s sound and controllability.

3. Reeds: Just like a tongue, this thin piece of plastic or metal gives a call its ability to talk like a duck or goose. Getting the right sound from a call depends on an almost magical combination of the length of the reed, its flexibility, and where it rests on the tone board. Duck calls can have one, two, or even three reeds; goose calls generally have just one.

4. Wedge: As the name suggests, this block secures the reed in place. It might be a square made of cork or rubber, or a curved block cut from the same material as the insert. Collectively, the insert, tone board, reeds, and wedge compose the call’s guts.

5. Barrel: This is the end you blow into. It can be made of wood, acrylic, or polycarbonate (plastic). The material and thickness of the barrel affects tone, volume, and ease of use. —D.D.