All you need to experience the best panfishing is a machete, a sense of adventure, and a tolerance for spiders 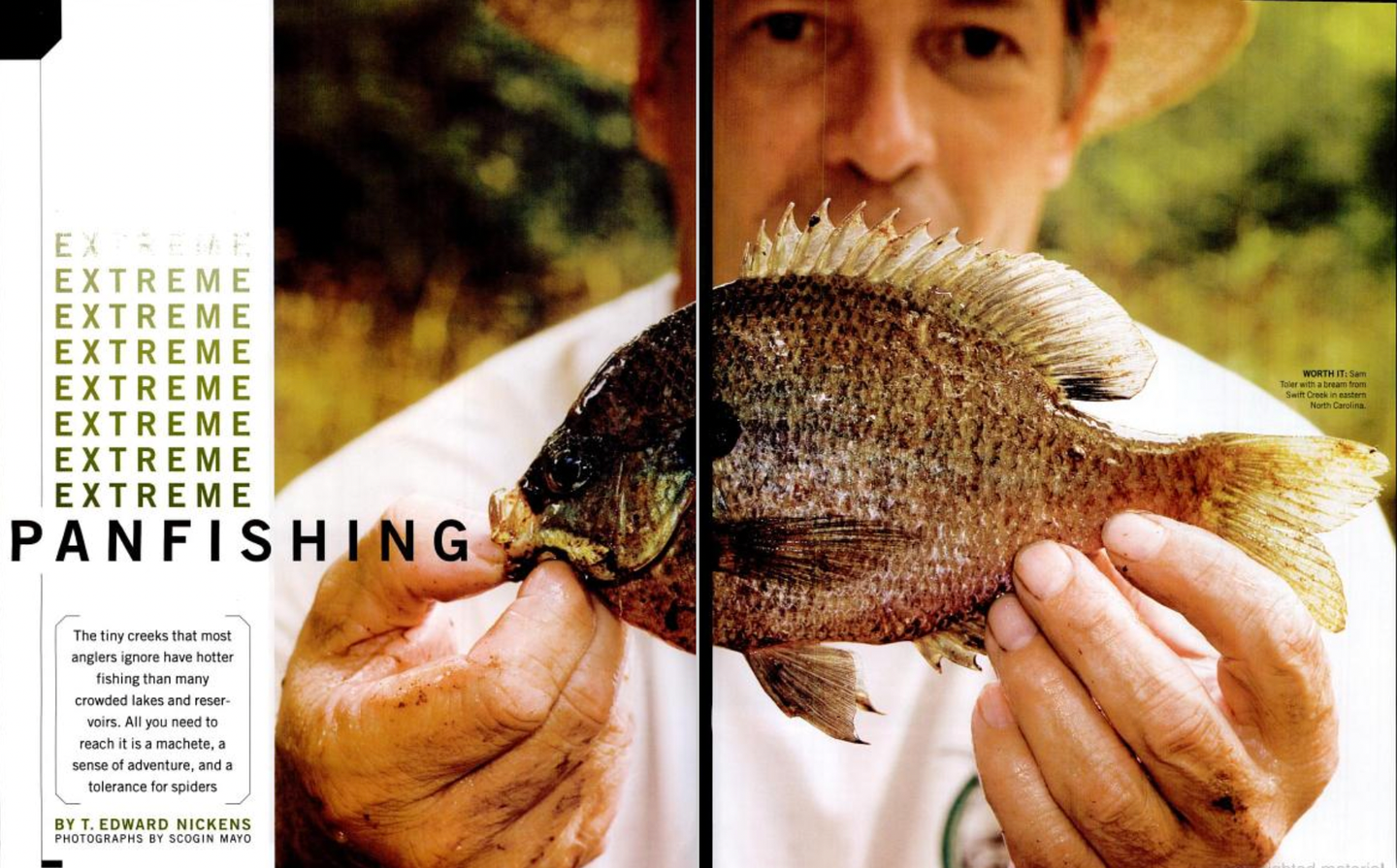 "Extreme Panfishing" was first published in May 2005. Field & Stream
SHARE

Editor’s Note – We have some exciting news: F&S editor-at-large T. Edward Nickens has a new book out! The Last Wild Road: Adventures and Essays from a Sporting Life is a collection of his best and most beloved adventures, essays, and columns from Field & Stream. You can purchase the book online, or wherever books are sold. To celebrate, all week we’ll be sharing some of our favorite classic tales from Nickens. Today’s entry, “Extreme Panfishing,” was first published in the May 2005 issue.

“What do you think?” Sam Toler asks. “Far right, maybe?” But Toler has already made up his mind, for I can hear him in the stern of the canoe, shoving gear out of the way. Just ahead, a downed river birch blocks the creek. We can’t get under it, and lifting the boat over the huge trunk would be no picnic. “Looks like a little hole beside that broken limb,” he says.

I grin and nod, tuck the rod tips under the gunwales, fold my seat down, and turn my hat backward. “The usual full-speed entry should do it,” I say, then we dig the paddles hard into Swift Creek’s languid flow. Ten seconds later we crash into the treetop like a train off its tracks. A jagged limb rips my shirt, drawing blood. Half a dozen spiders rain down my back, their webs a wet slime across my sweaty face. And a handful of turtles and at least one snake hit the water. Then the canoe screeches to a halt, held tight in a crotch of the tree.

“Snap, crackle, pop! Toler hoots. “This is my kind of canoeing! Hey, you use the machete. I’ve got a bow saw around here, somewhere. That wasn’t bad at all, was it?”

Well, no, I think. Not when I consider the little piece of paradise that lies just beyond the blowdown. It’s a pool of panfish water tucked into the outside bend of the creek. The bank shines with mussel shells, and an ironwood tree lies low over the stream just beyond the gold of a submerged sandbar. In two minutes we’ve cut our way free of the tree, and I scramble for my ultralight, buried under the half cord of firewood now stacked up in the boat. But Toler is a step ahead. He is short and powerfully built, his scratched and bleeding forehead covered with a battered straw hat. Despite his thinning hair, comparisons to Huck Finn are impossible to avoid. Within seconds of clearing the tree he’s fired a short-stroke, cross-the-chest shot that sends a Panther Martin spinner across the creek with the trajectory of a belted magnum. It banks off a cypress stump and lands in a dark eddy. He’s immediately playing a fat redbreast sunfish on 4-pound-test line. It’s fish No. 43 and we haven’t stopped for lunch yet.

“Oh, son,” he says, loading up that single word with more syllables than a water snake has ribs, “let me tell you something. I dragged my bass boat up and down the highway for 20 years. Left at 3 a.m. to fish some reservoir all day long just to come home with five bass and brag about what a great day I had.” Then one day, he explains, a coworker took him on a panfish float down a tiny, winding creek in a small fiberglass johnboat. They caught scores of redbreast sunfish, one of the most ornately colored freshwater fish on the planet. Known throughout the region as a “robin,” it’s a scrapper that loves clean streams and comes out of the darkest holes glowing with a sky-blue back and its eponymous firecracker-red belly.

Toler sold his sparkle sled a few weeks later and now owns six canoes and johnboats. “I see wild, wild country not an hour from my house. Never wait in a boat-ramp line. Get to act like Lewis and Clark. And catch one hundred fish a day, easy. No more big water for me. Uh-uh. From now on, I’m in the creeks.”

After a scant few hours in Toler’s battered canoe, I’m convinced he’s onto something. Toler’s home waters are the slow, black, swampy creeks and streams of eastern North Carolina, but similar small waterways are everywhere and just about universally ignored by all but bridge anglers. Pull out a topographic map of rural country near your home, and it’s likely that a webbing of smallish blue lines veins the landscape. They’re apt to be chock-full of creek-loving panfish—not pond-happy bluegills but intriguing quarry like the South’s venerated redbreast, rock bass in the Missouri Ozarks, and warmouths in Texas. “Draw a 50-mile radius on the map around here and you could spend a lifetime trying to fish all the creeks close to home,” Toler says.

It would be difficult to imagine a scene further removed from a big-water reservoir than this one. Swift Creek uncoils like a muscadine vine through the hardwood bottoms of eastern North Carolina. In places the skinny stream isn’t as wide as our canoe is long. When we pulled off the side of the road 100 yards from the bridge, Toler ran down to the water and hooted up through the brambles: “Goo-ooo-oood-ness, the creek is low-low-low. I don’t know who I feel sorrier for—us or all those fish we’re getting ready to catch!” We carried the canoe through 40 yards of brush littered with a soggy sofa, busted glass, bags of garbage, and a pickup-bed’s worth of old roofing shingles. At the water’s edge, cinder blocks, beer bottles, and Y-shaped rod-holder sticks suggested we weren’t the first ones to drown a cricket in Swift Creek. Toler seemed oblivious to the trash. “You just wait,” he said. “Soon as the bridge is out of sight you’ll be in another world.”

Ten paddle strokes are all it took to carry us underneath a canopy of tall river birch, gum, and swamp chestnut oaks. Cypress stumps and knees line each bank like teeth in a comb. Snakes drip from the trees; painted turtles and yellowbelly sliders plop with all the stealth of a loosed champagne cork. Once we leave the bridge, signs of human presence are relegated to jet contrails overhead and the occasional whine of distant logging machinery.

Fishing this water requires guerrilla casting tactics. I take two paddle strokes, grab the rod, and flick a spinner beneath undercut banks, into deep water on the far side of sandbars, and across the slack flow between buttressed cypress trunks. Backhand, forehand, underhand—most often there’s only time for a cast or two before I have to grab a paddle and steer clear of vines, briers, blowdowns, or sandbars. And most times I’m well rewarded. I make a cast: a robin. Another cast: another robin. Next a small bass with an oversize attitude smacks a Beetle Spin so hard that lure and largemouth come out of the water together. Just downstream, Toler’s rod is divining a 2-pound chain pickerel, what locals call a jack. It’s essentially a Southern-grown version of a northern pike, small but with a similarly scaled wallop and teeth.

The fish are willing but there’s a price to be paid—wading in dank muck, sharing a 15-foot-wide body of water with 4-foot-long snakes and spiders beyond counting. One time I feel something crawling up my thigh and glance down at three arachnids of varying species and ranging in diameter from dime-size to I’m-trying-not-to-think-about-it. I smash the most garish looking of the lot with my elbow in the same movement I use to flick a backhanded cast. It’s multitasking, extreme panfishing style.

And the bills come due in the form of blowdowns, logjams, and treetops felled by beavers and the hurricanes that have ravaged the region in the last few years. At times we paddle for a half hour or more with our feet in the boat. Other times we’re in and out again and again in a 20-minute stretch, hauling the canoe over or around moss-slicked logs and slashing our way through snags by means of various edged weapons. “People hear where I’ve been and they say, ‘What? You went down that little thing?’” Toler says, laughing and hacking at a thigh-thick branch. “When I tell people how much fun I had, they look at my arms all scratched up and bloody and say, ‘Uh-huh. That looks like fun.’”

Halfway through our route we take a lunch break on a sandbar scored with turkey tracks. Munching on boiled eggs and venison jerky, Toler sketches out his strategy for finding out-of-the-way panfish meccas. He pulls state government geological survey maps off the Internet and looks for long stretches of creek and stream between rural bridge crossings. They come with seductive names: Pig Basket Creek. Lick Log Branch. Devil’s Gut. He looks on topographic maps for waterways hemmed in with green-inked banks instead of white splotches that denote clearings and farm fields. The longer the run between bridges, the better, because high numbers of logjams turn back all but the most obsessed robin hunters.

“Ninety-nine percent of people will give up 59 minutes of pleasure because of one minute of pain,” Toler figures, when marveling at the lack of fishing pressure. But what fun it is. The rest of the day is a carbon copy of the first four hours, each grunt-filled haulover opening the door to yet another run of first-class robin water. We scatter heavy-bodied whitetails with antler nubs in velvet, and beavers give us weird looks, holding green saplings in their teeth.

When we hear a vehicle rumble across the narrow bridge somewhere ahead, we know the end is at hand. We tally up the score: In 7 miles of stream we’d been forced to haul the canoe over obstacles twenty times. One rod broke in a crash dive through a treetop, and I must have smashed at least thirty spiders into my arms, legs, belly, and noggin. We’d not seen a human footprint or a piece of trash. Along the way we’d landed 175 redbreast sunfish, fifteen largemouth bass, a dozen bluegills, three jacks, and a pair of suckers. And I’d be home in time for supper.

I ease Toler up to one last lie, a huge cypress stump lording over a sandbar that gives out to a licorice-colored run. “Oh, son,” he says. “I know a big one’s in there. Give me a minute to tie my shoes on tight. I don’t want that robin to take me away.”

But they already have a pretty good grip on me.