The attraction of the Canadian North is so strong, it's impossible to escape its pull 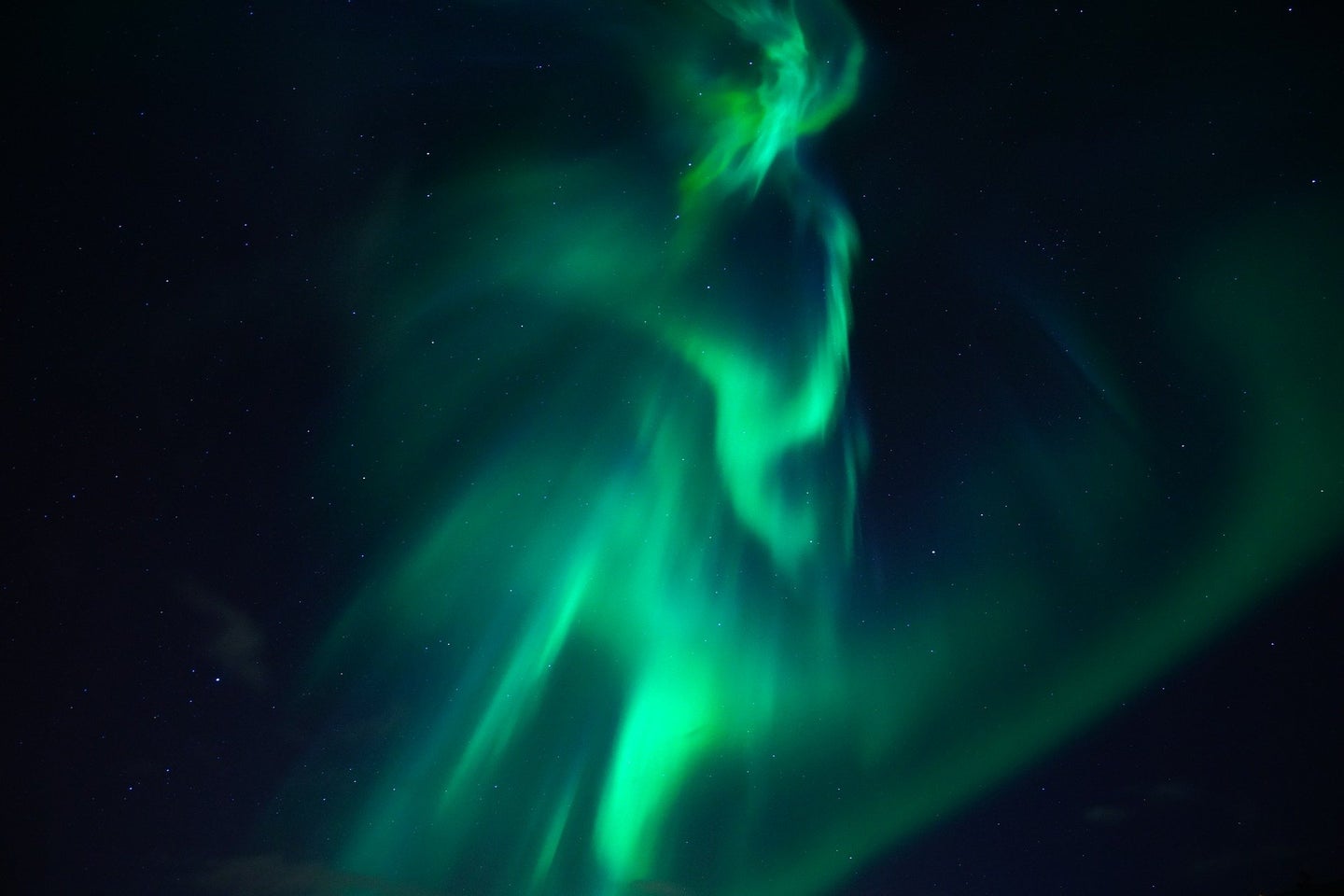 The chance to watch the Northern Lights is reason enough to travel North to hunt and fish. Pixabay / Hans
SHARE

Like the needle of a compass, I am drawn to its heart every summer. Fishing is my excuse, but fishing is only the glue that binds the adventures together. My attraction, like the Canadian North, is more complex than angling alone; a blend of northern nights, endless days, and a flinty, fickle land that just might be the last place on Earth where you can truly be alone.

It is a corner of the world that is replete with minor epiphanies. Head-high firs that look like robust second growth harbor 50 and 60 annual rings, each so slow to develop that you must count them under a magnifying glass. Outcrops of granite loom over the landscape, but in the hollows and under the trees, reindeer moss, soft as foam rubber, cushions your step. In the winter the sun appears for a few brief hours, slouching in the south. Then when summer arrives, night takes a holiday.

In June, in northern Saskatchewan, the sun rises at 3 and sets around 11. There is no darkness, just a pale twilight framed by a red sky. In that place and time, you could hold a rod in your hand 24 hours a day, and I confess that the first time I fished the far north, I tried to do just that.

Of course, sanity and sleep eventually bowled me over, but in their wake came some enlightening choices. I could have embraced a “normal” day and fished from 8 to 5, but like everywhere, the biting is usually best when the sun is low and shadows long, so I learned to sleep around midday and midnight, and that habit in turn became a tonic. I lost track of time and hearkened to a different clock.

I found that in the north you eat when you’re hungry, you drink when you’re dry, you sleep when you’re tired, and fish when it makes sense, and to hell with what your wristwatch says. Within that non-schedule you also discover one of life’s most elusive pleasures…pure relaxation.

Such personal revelations serve to punctuate major events, like when the lake trout move into the shallows soon after iceout. You can catch them then until your wrist gives out, until you tire of the predictability of it all, or until their collective weight would sink the average skiff. And while some people claim that catching a laker is akin to hooking an old boot, don’t judge these northern fish by downriggers, leadcore line, and more southerly standards. When they are over the bars and in the rivers they fall for fly rods with streamers and light spinning tackle, and since they can’t go down, they go out, fighting with all the spirit of a brook trout, even down to the brookie’s habit of thrashing around on the surface before giving in. Although eyebrows may raise in disbelief, I’ve even had lake trout jump when hooked in shallow water.

Read Next: The Best Northern Pike River in Canada

Trolling for lakers is remarkable then, too, for trophy-class fish can be caught on small minnow plugs and light line without weights, planers, or cowbells. One evening, a friend hooked a 30-pounder on a 4-inch crankbait and 8-pound-test, the battle made all the more memorable because the fish could be seen on the sonar screen and as it neared the surface, it seemed to grow as big as the boat. Imagining he might have snared some kin to the Loch Ness Monster, his partner kept hollering “Cut the line! Cut the line!” leading to a lot of kidding in camp later that evening.

While lakers are said to be king in the land of the midnight sun, there’s a lot to be said for the northern pike up there, for they are the jokers. Nutty and unpredictable, you never know when they’ll turn up on the end of a line, or what they’ll do next. I can’t count the times I’ve had my preserves jarred by a big pike while fishing for grayling, walleyes, or lakers on light tackle, but if one memory remains indelible, it is of the northerns in Selwyn Lake on the border of the Northwest Territories.

A friend was blazing a trail of new fishing camps in the area and he asked me for a “favor.” If he footed the bill for me and a companion, would we go into Selwyn for a week or so, and map and graph the lake and find the best places to fish?

We flew in on a De Haviland Beaver with a 16-foot runabout strapped to its pontoons and enough grub and gear for 10 days. I still count them as among the best days of my life.

Sunlight sparkling on a hundred hidden bays; the goosebump warbling of loons; the absolute and utter solitude that welled up around us! We camped on sandy beaches, swam naked in the cold, clear water, carried no wallets, and walked barefoot.

It was mid-July and in those far latitudes pike were still spawning in the shallows. All it took to hook one was a deer hair mouse cast into the tules and retrieved with a few erratic jerks. The northerns fell over their fins trying to catch it, as many as three and four at a time waking toward the bait. The mouse also led the way to a revolutionary fishing technique never before revealed on the pages of an outdoor journal; we christened it “bashing.”

Although that fuzzy bait represented a sure thing, when pike took it they were usually deep within a weedbed. By the time one of us wrestled the fish into open water, it would be buried in a wad of greenery, all but immobilized and resembling the Creature from the Black Lagoon.

Once, wading ashore to snap some photos, I flushed a dozen pike from hiding. On the following photo-op, the same thing happened. Inductive reasoning soon found us taking turns, one man in the boat and the other ashore, beating the weeds with a landing net. Not only did the man in the boat get a crack at fish in open water, but the guy ashore could track the big ones and direct his partner’s cast.

“Twelve-pounder heading your way, two points abaft the starboard beam…” In retrospect, it seems a little silly, and it was. But we laughed a lot and caught pike until it became pointless.

If the days were spectacular, the nights were magnificent beyond reckoning. In the black vacuum of a sky a thousand miles from the nearest cityglow, the infinity of stars was in itself a marvel, yet even they were eclipsed by the meteor showers and the Northern Lights.

Each evening we were witness to celestial fireworks as chunks of outer space collided with the atmosphere, and on the last night of our stay, I was awakened by an eerie glow around 2 A.M.

Beyond the tent fly, the horizon was dancing with light as if from a thunderstorm, but the air was deathly still. Slowly, pastel bars began to move from west to east, the colors so brilliant and their progress so precise that they reminded me of a 1950s vintage jukebox. The bars dissolved into horizontal rays that swept overhead, shot straight out of Star Wars, then melted into misty clouds that swirled like gossamer curtains blowing in a gentle breeze. I dragged my air mattress onto open ground and watched the show for hours, drifting back to sleep only after dawn ended the extravaganza.

While the far north is most frequently associated with rugged outback adventure, that is not an entirely accurate portrayal. Many camp operators offer housekeeping cabins that have been flown into wilderness sites and assembled piece by piece. They include amenities like refrigeration, hot showers, gas barbecue grills, and even radio telephones. There is something to be said for “roughing it” among all the comforts of home, especially when home has been plunked down in the middle of nowhere.

Last year Paul Updike, a photographer, Iron Mike Levine, a New York City cop, and I spent five days tent camping and then elected to finish off the remaining days of our vacation in a housekeeping cabin on the Wheeler River in north-central Saskatchewan. A sun deck overlooked the river, our boat was moored to a permanent dock, there was a sand beach for swimming, and if you saw a photo of the place, you might think it was a summer retreat on a Midwestern lake within three hours of Chicago. In fact, it was 150 miles from anything that could remotely be called a town.

The Wheeler was having your cake and eating it too; a place where you could say, “I think I’ll have some walleye filets for dinner” at 5 and have them frying in the pan by 6; a place where a 10-minute boat ride to frothy rapids put you into grayling and whitefish that slobbered after anything resembling a dry fly and where northerns lurked like malevolent logs along any weedy shore. Then when the day was over, a hot shower and crisp sheets topped it off. Paul dubbed it “decadent camping.”

Such stark contrasts—the primitive abiding the modern—can also fuel minor conflicts of values. One night, just before turning in, we all had a yen for a midnight snack.

“Man, what I wouldn’t give for a pizza right now,” Paul fantasized.

Mike then regaled us with the wonders of a pizza parlor around the block from his apartment: spicy pepperoni, thick cheese, mountains of mushrooms, and a thin, crisp crust.

“You know their number?” Paul asked. “By heart,” Mike shrugged. We all looked at the radio-telephone.

“Wanna find out if they really deliver?” grinned Paul.

Although I have not yet decided where or when, I am already making plans to go back next year. Maybe this time I’ll catch the lakers in the shallows in the fall. It would be wonderful to see the north country turn to gold. The blueberries would be ripe then, too, and I could hunt some grouse. But I’d sure like another crack at northerns coming off their spawn, and in late July the grayling and whitefish go nuts over flies. I have also heard that iceout is a marvelous time; fish that haven’t had a decent meal for eight months coupled with the arrival of nesting waterfowl and eagles. Perhaps then?