If you want to send 800 hard-hitting pellets at a turkey from 60 or even 70 yards, TSS is the stuff to have 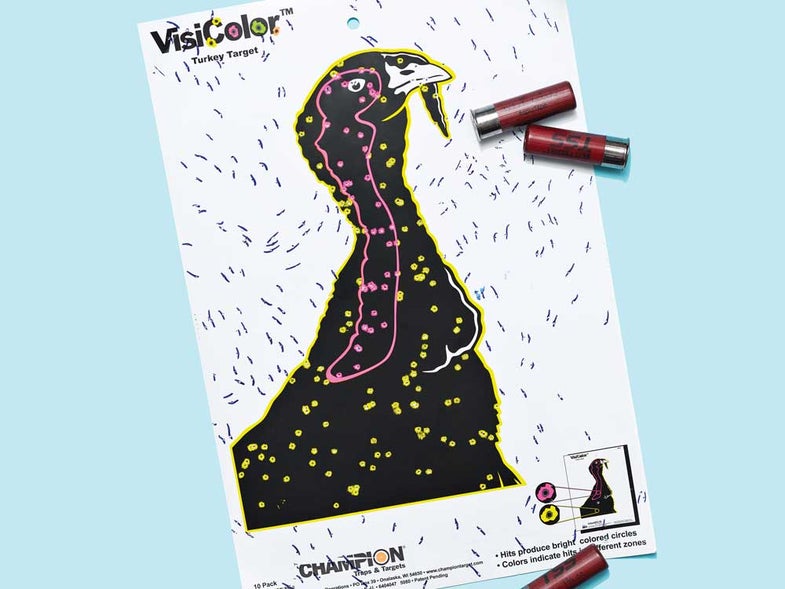 Got Him! A devastating pattern at 40 yards with TSS No. 9 shot. Ralph Smith
SHARE

“I am your density. I mean, your destiny,” said George McFly in Back to the Future. When it comes to shotgun pellets, density is destiny. The denser the shot, the better it retains velocity, the harder it hits, the smaller the shot size you can use, the tighter it patterns—and the better it drops turkeys. Tungsten Super Shot (TSS), now available in commercial loadings, is the densest projectile available outside the military, and it could mean more tagged toms in your future.

If you want to send 800 to 900 hard-hitting pellets at a turkey’s warty head from 60 or even 70 yards, TSS is the stuff to have. If you want to turkey hunt with a 28-gauge or a .410 and still take ethical shots to 35 and 40 yards, TSS lets you do that too. It’s remarkable stuff, from performance to price tag.

TSS is a generic term for tungsten-iron pellets blended to a weight of 18 grams per cubic centimeter. Until recently the province of a fanatic fringe of handloaders, TSS escaped mainstream notice for years. But now industry giant Federal, startup ammo maker Apex, and longtime niche brand Nitro Co. have all introduced new TSS loads.

TSS pellets are a blend of powdered tungsten and iron, formed by a sintering process that leaves them beautifully round, uniform, and very hard, qualities that help TSS loads pattern with astounding efficiency. Previously, Federal’s Heavyweight was the density champion at 15 g/cc, followed by Hevi-13 at 13 g/cc. Lead, by comparison, weighs 11.3 g/cc. One of the key advantages of increased density is that it allows you to use smaller (and therefore more) pellets—and yet still retain lethal penetration energy. TSS 9s, at 18 g/cc, penetrate slightly deeper into ballistic gelatin at 40 yards than lead 5s.

Think about that. TSS 9s are equal to or better than lead 5s—and there are more than twice as many TSS 9s to an ounce. My favorite 13⁄4-ounce turkey load of lead 5s contains 297 pellets. Federal’s 13⁄4-ounce load of TSS 9s contains 630 pellets, with enough energy to kill at 70 yards. TSS turkey loads come in sizes from 7 to 91⁄2. You can figure each size hits with the same energy as lead that’s four sizes larger.

In advance of turkey season, I was able to get a little bit of preproduction Federal and production Apex TSS to test. Even in the dense air of a 30-degree day at 70 feet above sea level, patterns at 40 yards were excessive: The 3-inch, 21⁄4 -ounce Apex TSS, which contained 814 pellets, put about 350 of them into a 10-inch circle. Federal’s 3-inch 13⁄4-ounce loads contained 630 pellets and averaged around 230 in the circle—which is much more than you need to reliably kill a turkey (see sidebar).

With my limited supply of ammo, I had enough for one shot with each brand at 50 yards. Both showed more than enough hits inside that 10-inch circle to make a 50-yard shot a sure thing: 171 for the Federal, 208 for the Apex. I used a .665 choke per Apex’s recommendation, although Federal has found its best results with .640 to .650 chokes. Personally, I draw the line at 50 yards, but if you want to shoot turkeys from far away, TSS has the density and the energy to kill at very long range.

For those who must have the most of everything, there are 31⁄2-inch loads of up to 25⁄8 ounces of TSS, costing up to $13 per shell. They are overkill, although they do give you the option of opening your choke to Full or even Modified for closer shots while still having plenty of pellets and energy to kill at longer ranges.

Where TSS gets really interesting is in the smaller gauges. For one thing, when you decrease the payloads of expensive pellets, the price of ammo drops from an exorbitant $10 to $13 per shell to a merely expensive $5 to $7 apiece. A 20-gauge TSS load makes your 20 the equal or better of most lead-loaded 12s, and the 28-gauge Apex load isn’t far behind the 20. In .410, TSS is nearly the ballistic peer of a good 20-gauge lead load, but it kicks much less and fits into a smaller, lighter gun, perfect for kids, new shooters, and mobile hunters.

There’s a slight catch, however, for the time being: Some states don’t allow any gun smaller than a 20 for turkey hunting, and only about half allow 9 shot. That is likely to change. When Federal introduced Heavyweight several years ago, many states prohibited shot smaller than No. 6, until education and lobbying changed that. I would expect TSS in all gauges and sizes to be legal almost everywhere very soon. For now, in the more restrictive states, 12- and 20-gauge loads of TSS 7s (about 185 pellets per ounce) are available from Apex and Federal if you can’t wait to find your density.