The benefits of an easy river trip for a special species of bass in Georgia. 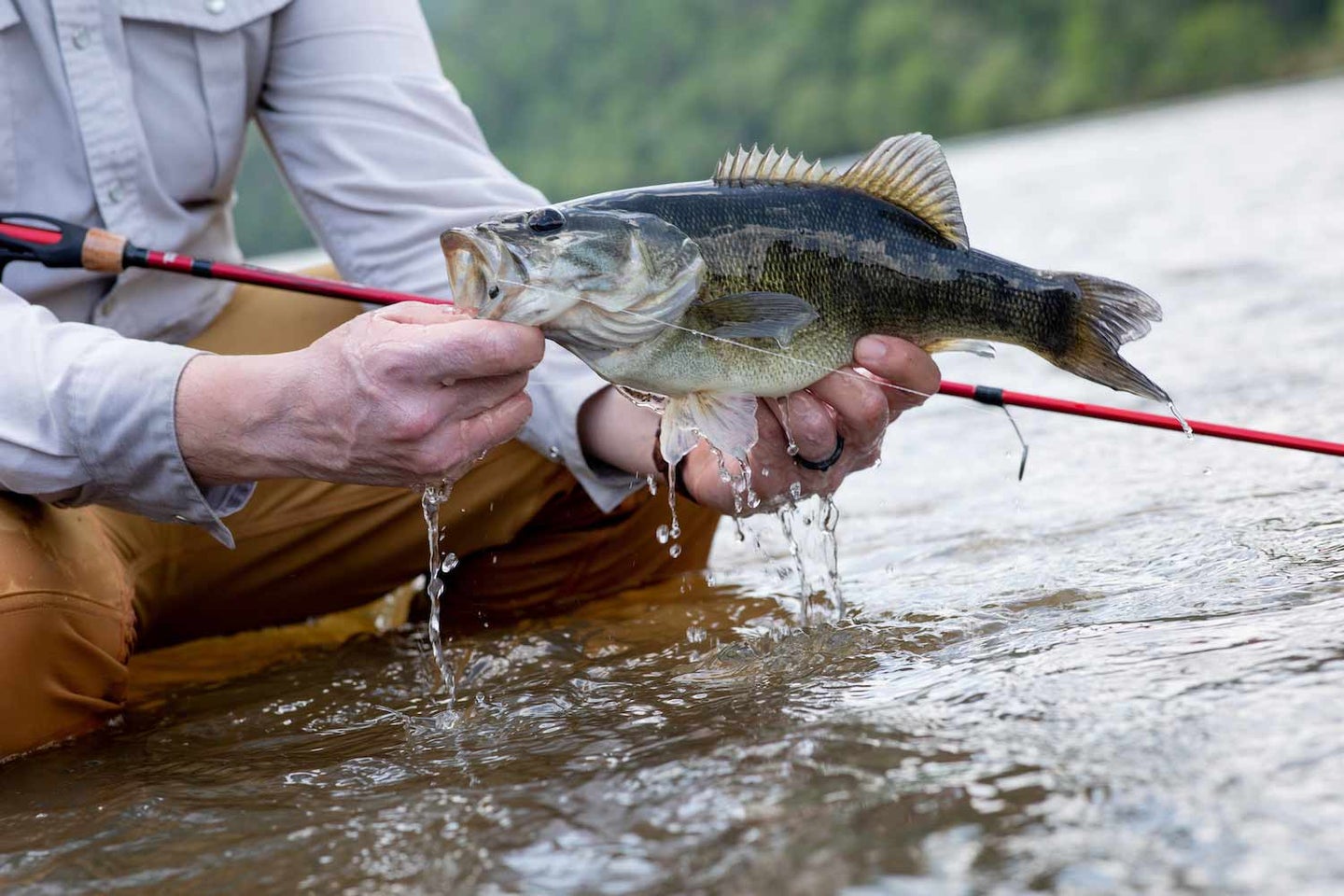 The canoe carrying us downriver had three names, a few different paint colors, and quite possibly, a leak.

Despite the name C-Lyne painted on one side of the bow, and C-Line painted on the other (both pronounced like “sea lion,” apparently), Kyle LaFerriere and I dubbed the boat The Manatee. Loaded with camping gear, a cooler, a drone, more camera equipment, and our fishing gear, the canoe floated down the river at its own pace. As the trip progress and water filled the center storage hatch it leaned side-to-side as it floated; a dugong unresponsive to our demands.

Despite tough conditions, tricky river currents, and the proximity to large cities, this relaxed river trip offered us an escape in the search for a rare species. The shoal bass is native to this one river basin throughout the world. Berkley pro staffer Andrew Wade, his brother Cody Wade, and their mutual friend Matthew Peeler are lucky enough to call that river basin home.

Georgia’s shoal bass not only resembles a smallmouth bass—the noted difference being a variance in their marking patterns—but they also fight hard like a smallie. What’s more, they even take many of the same baits, but the Wade brothers and Peeler prefer to throw large swimbaits to target the largest fish in the river.

According to the local anglers, the float route we had chosen is one of the more productive stretches of the Flint River. This is where they spend most of their time throwing big baits. We found though that the early spring conditions weren’t ripe for chasing larger fish, so instead threw small, subtle presentations.

Andrew’s tackle box for the trip was full of hardbaits like the Choppo and J-Walker, but the most productive and consistent bite came from soft-plastics—in particular the Ca$h Out.

Anglers from all over the world come to this particular river basin, often staying in nearby Thomaston, Georgia, but this is the Wade family’s backyard. The put in is only a few miles from the front door of Andrew Wade’s house, as the crow flies. Driving rutted dirt roads and over mountains, however, added to the trip to the river the morning of our launch.

The plan was to float a short stretch of river on day one, then camp on an island in the center of the river overnight. The next day we would fish the remainder of the short stretch of river to where our trucks were waiting. Peeler explained that though the trip can be done in a day, they often stay overnight at the campground to take their time and better enjoy the river. “The campsite where we’re gonna stay this weekend is the first place I camped on the Flint River,” Andrew Wade says. “It’s a very special spot for me.”

Even with a reverence for the fish and the river there was no fear of over-sentimentality—the trash talk started right away. As is typical when fishing with siblings and close friends, the group graded each other’s casts (“for skipping it under that bank: 7.9”), kept count of how many fish we caught, and searched for a fish that would one-up all the others in size.

“Andrew’s good, and he’s taught me everything I know—just about,” Cody says. “But I’ve put a little bit of time of my own. I got a few little tricks and secrets he don’t know.” Some of those tricks, like skipping lures under banks or targeting eddies and seams behind rocks, proved to be effective. Still, the fishing was tough.

Sometimes the Fish Don’t Want Anything

We did manage to catch fish. While topwater hardbaits and finesse worms worked sporadically, the most effective technique was the simplest. Letting a soft plastic flatworm drift behind patches of vegetation or rocks in the current, adding as little movement as possible, got more bites than anything else. I felt like I was drifting dry flies for picky trout. The only differences being the heat, the potential for snakes (we only saw a few), and the shoal bass that exploded out of the water on every hook set.

After catching fish all day, we settled into the campsite on the river for giant, two-inch thick ribeyes, cooked in the flames of a campfire. Peeler, the consummate camp cook, paired the meat with more than a few craft beers, and potatoes baked right in the coals. He also spun southern tales that kept us laughing all night.

Read Next: The Best New Bass Fishing Lures to Throw This Year

The second day on the water proved even tougher than the first. We launched first thing. As the sun warmed the surface of the Flint River, we threw topwater plugs and buzzbaits expected a topwater melee. Instead, the fish remained stuck up, refusing everything but the sublest, slowest presentations we could imagine. The river left us wanting more––a return trip for that trophy shoal bass you can’t find anywhere else.

At Least We Didn’t Sink (All the Way)

We only sank a little.

As we were rounding the last few corners in the river in the afternoon of the second day, The Manatee started to feel a little heavier than usual. Checking the storage hatch that formed the center thwart of the canoe, we found more than six inches of water sloshing around inside. No wonder our constant bailing with a cut-off water bottle hadn’t helped us much.

Throughout the trip Kyle LaFerriere and I took turns bailing and fishing. Loaded down with extra camera gear and camping equipment, the gunwales of the boat were sitting lower in the water than optimal, which meant each set of mild rapids added to the puddle at our feet.

The boat, not exactly agile in the first place, was barely able to follow a line through a rifle and often stranded us in the shallows. After getting out to push the boat into deeper water, soaked pant legs would further add to the mess. All this somehow added to the fun of the trip.

Instead of trying to finesse a line, we’d often stop and fish the current seams around rocks or islands while wet wading. At camp, after getting setup and starting a fire, we headed back out with the kayaks attached to our belts.

Even with the risk of flipping gear and getting wet, kayaks offer the best chance at targeting shoal bass in skinny water. While the team was busy filming their final shots of the day, underneath a glowing sunset that filled the entire river valley, I had my fun with more shoal bass.

Read Next: Classic Boats for Fishing and Hunting

That late in the day, I didn’t care if I was only catching small fish, because nearly every cast returned a rare, native, feisty shoal bass. Those fish are definitely worth a trip back to Georgia—even if I have to paddle the C-Lyne-C-Line-Manatee to reach them.