The Next Endangered Species Is the American Hunter 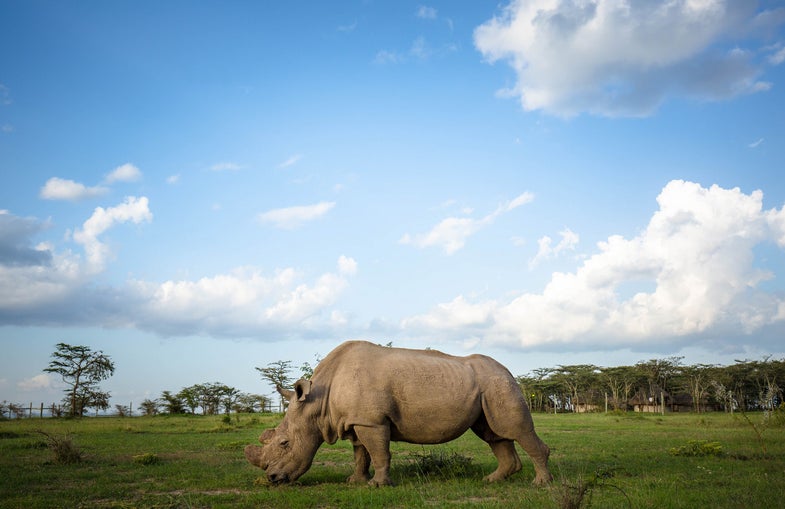 Sudan, the last living male northern white rhino, died in Kenya the other day. Which means that  the survival of the subspecies—while theoretically possible using untried in vitro techniques—is unlikely. Some days, I don’t feel that well myself.

Especially after reading an NPR story about how the decline in U.S. hunters is threatening how our country will pay for conservation efforts. The piece quotes Tom Wrasse, a Wisconsin hunter on the last day of the season and the sole person at what used to be a busy hunting camp. “It’s just kind of fading away,” he told a reporter.

Back in 1992, a rural sociologist at the University of Wisconsin–Madison made what was then a bold prediction: If trends like increasing urbanization, smaller families, and the antihunting movement all continued as predicted, the sport of hunting as known by Wisconsinites could be nonexistent by 2050.

That no longer seems so farfetched. We’re all familiar with how modern life—with its increasing urbanization, less access to public hunting areas, less free time, more time watching screens, and youth sports that penalize children who miss weekend practices—makes it harder for kids to take up hunting. At the same time, the one-third of American hunters who are baby boomers are aging out of the sport.

The thrust of the NPR story was about economics. The decline in license sales is hitting state wildlife agency budgets like CWD. In Wisconsin, the DNR has cut 16 positions in its program in the last four years and reduced budgets for wetlands management. Colorado has had to cut tens of millions from its efforts to combat invasive species. The National Wildlife Federation says that one-third of U.S. wildlife species are imperiled or vulnerable and that current funding for wildlife conservation is “less than 5 percent of what is necessary.”

This is bad news. We need to fund wildlife conservation. One idea is to monetize the growing number of nonhunting Americans who use and value wildlife, such as hikers, birdwatchers, canoeists, etc. But aside from the financial angle, there’s something else we should be paying attention to—the loss of the distinctly American tradition of hunting.

Who else goes and sits silently in the woods all day, trying not scratch where it itches or cough when the urge arises? Who notices that the squirrel population is down this year or that the multiflora rose or other invasive species has crossed the stream since last year and is now headed up the hillside? Who else rides the daylight down and into the dark, climbs down the ladder one slow rung at a time, and tries to sneak away as if he’d never been there at all? Who else goes home frequently not having succeeded at the stated aim of his “sport”—to reduce to possession a wild animal—but with a full heart?

I don’t know that I could demonstrate the worth of such things in a PowerPoint slide show. Actually, I know that I couldn’t, since I have no idea how to use PowerPoint, although I’m told it’s “very intuitive,” which I’ve learned means that I can’t do it. But I do know that if and when the day comes that no one hunts any more, we’ll have lost something as real as that last male northern white rhino.