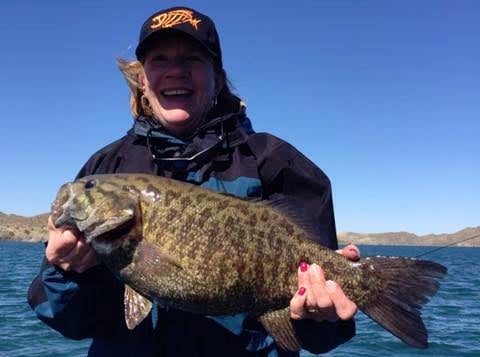 Sue Nowak was fishing with a local guide service when she landed this record-breaking smallie.. Sue Nowak
SHARE

Sue Nowak, of Havasu City, recently broke the Arizona smallmouth bass record on Lake Havasu. The late-February catch weighed 6.28 pounds and measured 21 inches. “I thought it was a tree stump or rock,” Nowak told FishAZBlog.com. “Then the snag moved.”

The angler was fishing with a local guide, Shaun Bailey’s Guide Service, and caught the lunker bass at midday. She was using a drop-shot-rigged True Image Mini Shaker lemonade worm.

The area has a history of big fish, with seven other state records coming out of Lake Havasu, including the former hook-and-line record that Nowak broke, as well as the current catch-and-release smallmouth record. Lake Havasu also produced the world-record redear sunfish in 2014.

“Havasu fishing is getting better,” Arizona Game & Fish Department wildlife biologist Russ Engel told HavasuNews.com. “The number of shad are making a comeback as well – when those small baitfish numbers go up, every fish in the lake does well.”

Nowak’s record fish can also be attributed to the strategically-placed artificial structure that the lake has. Since 2002, the AZGF has teamed up with the Bureau of Land Management, U.S. Fish & Wildlife Service, U.S. Geological Survey, Anglers United, and the Lake Havasu Marine Association to install more than 875 acres of man-made habitat.

“Havasu is one of the top bass fisheries in the country,” said Marine Association President Jim Salscheider. “It’s a testament to the fisheries program – it’s been a huge success.”