The Art of Sleeping in Your Hunting Truck

Spending the night in your rig can be rough, but come morning the wild is all yours 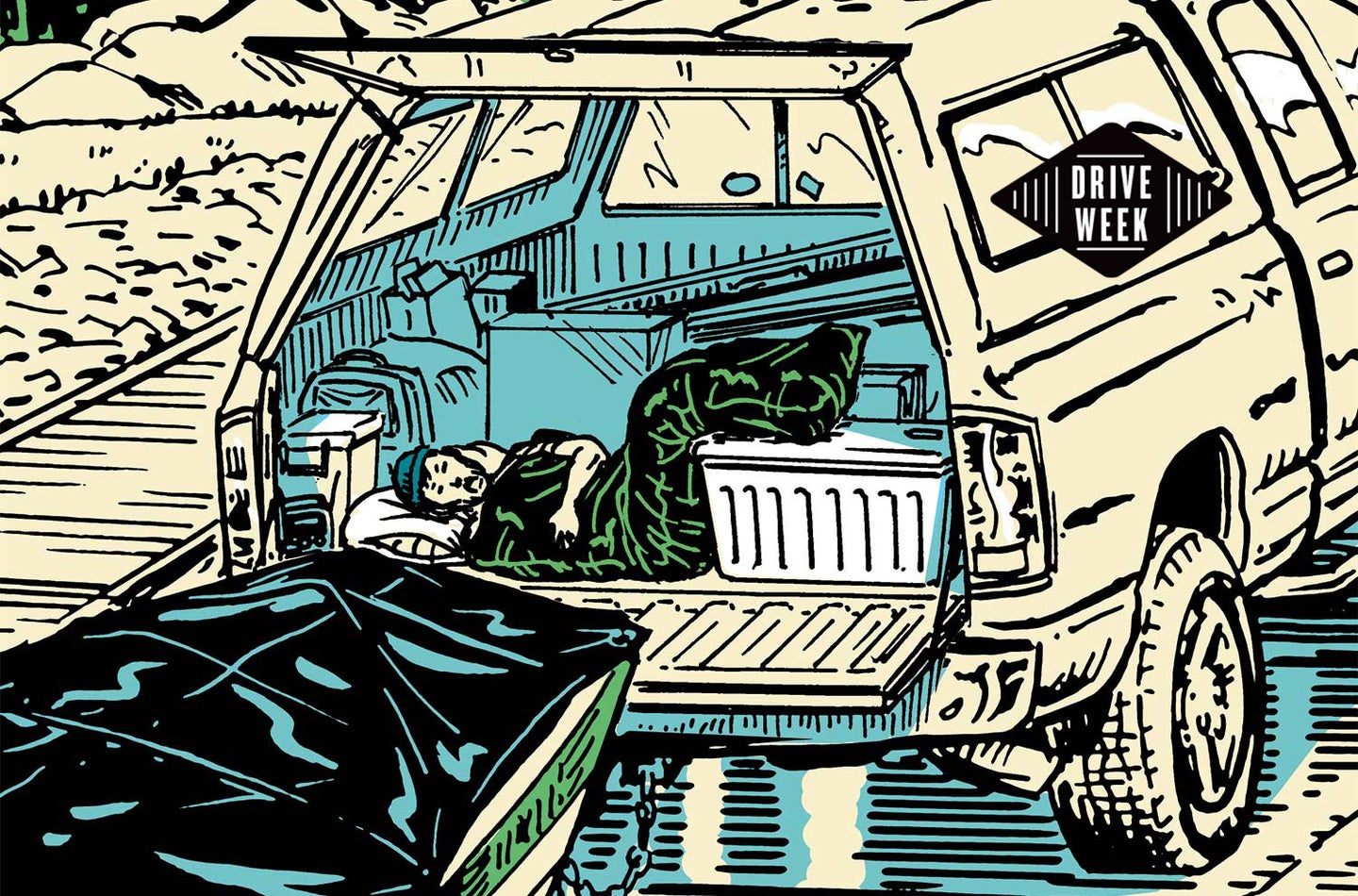 Despite the discomfort, there's nothing like beating the crowd and waking up at the trail head or boat launch.
SHARE

Welcome to Drive Week. To celebrate the launch of our brand-new Drive Issue, all week long we’ll be publishing stories about road trips, hard (and rewarding) hunts, classic truck guns, and more. So, buckle up and enjoy.

I went from seriously pissed off to a murderous rage at some point in the wee hours of the morning. This was after I’d given up all hope of sleep. My cognitive function was frazzled. My grip on sanity had slipped. By then, my buddy Lee Davis and I had pulled everything out of the back of the truck . We booted the dog. We shoveled sleeping bags and pads, shotguns, dove stools, a cooler, drink cans, bags of chips, and candy bar wrappers into a heaping pile in the cornfield. We pulled out the spare tire and toolbox, and flung them on the ground. There was nothing left but a bare-metal camper shell overhead and the bare-metal bed of a ’73 Chevy pickup below. We scoured every inch with flashlights.

And still, we couldn’t find the cricket.

What a beautiful idea it had been. Nobody else would have thought to sleep in their truck. It was the night before opening day of dove season, and Lee and I were determined to score the best spot for the day’s shooting, on the edge of the cornfield as it rose in a slight swell so even the high flyers would be within reach. And there could hardly be a better way to stake our claim than to park my pickup there 12 hours early. Only when I look back do I understand that all we really needed to do was get up a half-hour earlier at the lake house and drive to the Burke farm before anyone else. But that was nowhere near as much fun as sleeping in the truck.

Pulling these rough bivvies—be they in the bed of a truck, rolling out a sleeping bag in the middle of the trail when you’re caught by the dark, or snagging a somewhat-south-of-legal snooze off the side of the highway—seems to be a rite of passage for hunters and anglers, at least for those of us who are serious and borderline deranged. Many of us are bound and determined to get the jump. We’ll sleep at the boat ramp, crash at the trailhead, or curl up in a fetal position in the back seat of the car so we can beat the crowd to the public waterfowl impoundment. Many times, the best way to get there first is to get there the night before.

I remember that at some point I made ­visual contact with the cricket, and I beat the living hell out of the truck bed with a tire iron as I scrambled after the bug on all fours—furious, slightly unhinged, and naked but for my tighty-whities—until I cornered the cricket in a piece of aluminum channel that held the truck cap to the truck bed. And there the insect bayed up, unfazed and singing like crazy, as safe from the tire iron as a treed raccoon is from a pack of hounds. Lee and I spent the rest of the night on the ground, sleeping the deep sleep of the young and not yet arthritic.

Since then, I’ve pulled some doozy rough-nighters. I’ve slept in the truck and under the truck. I’ve cooked dinners, read books, written magazine stories, and tied flies in that meager hovel under the truck cap. Once, my entire family was driven out of the tent and into the pickup truck by high winds and tree limbs thrashing all around us. We toughed it out through a terrible night, all wadded up in the cab like a pack of denned-up rattlesnakes. And just as ornery come morning.

It seems like the nights that are the most miserable wind up being the most memorable, and that’s what concerns me these days. Roughing it on the road has become increasingly gentrified. Granted, I’ve never slept on rocky ground with my head on a horse saddle, but all of my time as an outdoor dirtbag has been spent in some beat-up rides. First, there was my 1973 Ford Pinto station wagon. Next came the Ford Capri—my first duck-hunting vehicle, to which we strapped a 16-foot canoe to the hood—that I bought for $350 and sold for salvage metal a few years later. Since then, I’ve spent countless nights in my current succession of Hotel Silverados. That’s a far cry from the onboard juicer and fairy-lights fetishism of today’s #vanlife crowds. If he were alive and kicking today, Jack Kerouac wouldn’t be caught dead smoking a blueberry e-cig in a glorified $80,000 VW van.

And sometimes the rough bivvies pay the biggest dividends. On my first trip out West, just after college graduation, my buddy Bill Leonard and I stuffed his Datsun b210 hatchback full of a month’s worth of camping gear and blasted out of Greensboro, North Carolina. We crashed at a friend’s apartment in Memphis the first night, then drove nonstop 18 hours and 1,000 miles across Arkansas, Oklahoma, the Texas Panhandle, and New Mexico, to just over the Arizona state line. Exhausted, we pulled off the interstate onto a service road and stashed the car behind a billboard, just like we’d seen in cartoons. We rolled our sleeping bags out on the bare ground and fell asleep with 18-wheelers groaning in our ears. I woke up spooning with the Datsun’s rear tire. My vertebrae felt like they’d rusted together. But when I sat up, the plains around us were speckled like the flanks of a trout with pronghorn antelope all the way to the low rise of hills to the west.

I had no firm idea where I really was, and I had an awful crick in my neck. But I leaned against that car with the deep satisfaction that comes from pushing down the road till the skies run out of light and your body runs out of gas. I watched the pronghorns, and I knew I had arrived.