Forget banging on barns and go high-tech for pigeons. 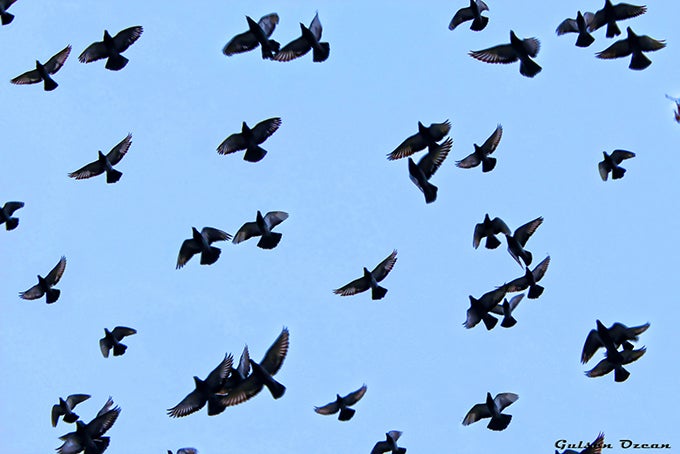 If you just want to shoot a few pigeons, you can do it the old way: Post shooters outside the haymow window, bang on the side of the barn, and have at it. But if you want to max out your haul, you need to get with the times. These days, realistic full-body fakes, electric spinning-wing decoys, pigeon calls, and blinds—including two-dimensional cows for hunters to hide behind—are becoming standard. Idaho resident Neal Hunt is just one hunter who takes pigeon shooting very seriously. His cutting-edge game plan routinely scores triple-digit birds.

1 | X-Games
As with waterfowl, being where the birds want to be is vital. “You can run traffic with pigeons and have some success,” Hunt says, “but being on the X makes most hunts a home run.” Scouting is the key here. Simply glass from a distance to see where the birds spend most of their time in a feed field.

2 | Basic Spread
Rock doves will work a decoy set into the wind, so place yourself upwind of it. Hunt keeps six or eight dozen full-bodies balled up tight, like feeding birds, with a hole about 15 yards in front of the blind. Decoy color variations within the spread, as well as mixing in shells and silhouettes, increase realism.

3 | Bodies in Motion
“Pigeons constantly jump and fly ahead of the flock,” says Hunt. “They’re always in motion. The males are trying to breed all year, so they’re strutting and spinning in circles.” Along with his full-bodies, Hunt uses two or three spinning-wing Mojo Pigeon decoys, each placed where he wants flocks to finish. Installing timers in them enhances the appearance of birds leapfrogging within the flock.

4 | Bring the Noise
Hunt plays preloaded pigeon sounds from Mojo’s Double Trouble E-Caller. “Pigeons on the ground are loud,” says Hunt. “We’ve used both the -E-Caller and mouth calling, and it definitely makes a difference.” If you’d rather mouth call, a deep-throated coo works best.

5 | Cow Tipping
Concealment is key. “We often use layout blinds,” Hunt says. “Or the Moo Cow silhouette from Montana Decoys when we’re hunting feedlots or anywhere there’s cattle.” A bucket behind the faux heifer serves as a seat and shotshell holder. Take lots of shells—you’ll need them.

Pigeons At The Flight courtesy of G.Ozcan via Flickr