If you can bear the cold, now is your best chance to drop a few Canadas—when they're constantly on the feed. 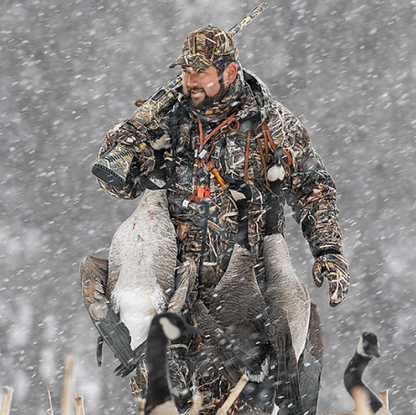 There are few better feelings than watching 5,000 Canada geese in a field you’re going to hunt the next day. As I glassed the birds, a coyote ran through the mass. The hungry geese simply lifted over the coyote as it ran underneath them, then settled back to resume feeding. They looked like fans doing the wave at a football game.

I had followed a flock out of town until they landed on a snow-covered hillside with thousands of others. More geese flew low overhead as I pulled into the farm lane, knocked on the door, and asked permission. The landowner said: “I think that would be…” He paused. I held my breath. “…just fine.” I thanked him and made plans to be back before dawn.

Birds About Town
Cold weather changes a goose’s priorities. Early in the season, geese hop from field to field on a whim. They fly when they feel like it and feed without urgency. Drop the temperature, though, and geese know the cold is a deadlier enemy than any predator. They have to feed hard every day—and become easier to pattern as a result. If it’s clear and cold, they will feed once, sometime after noon. If it’s storming and snowing, they’ll fly all day.

Winter also sends geese to town. As the ponds and marshes freeze, geese find open water below dams and near warm outflows, on park lakes and aerated suburban ponds. In December and January I often spot geese while running errands. When I see them bound for the fields outside city limits, I give chase. Once the geese find a field of corn, you can usually count on them being there the next couple of days if they’re not disturbed.

Go Big, or Go Home
Six of us came back early the next morning after I found those 5,000 geese. We had layout blinds with white covers and a trailer packed with 300 decoys—which was about 200 more than we needed, but we were going big. We set the blinds close together where the main bunch of geese had been feeding the night before, then dug them into the snow. We piled more snow on and around the blinds until they looked like a single snowdrift. With the blinds hidden, we built the spread around them, putting some decoys behind, and the rest in a wide U that faced downwind in front, leaving 30 yards between the arms as a landing zone and setting a line or two of decoys downwind, as if they had landed and were walking in to join the main flock. Setting decoys by truck headlight is tricky: Everything appears farther away than it really is in the dark, and it’s easy to set decoys too close together. When the sun comes up, you have a clump. We made sure to take two or three giant steps between decoys.

At shooting time we climbed into our blinds and waited. For about 20 minutes, I wondered if the birds were coming or if they had found somewhere else to eat. Then the first string of geese came into sight, low to the ground and boring straight for the landing hole, with bunch after bunch trailing behind them.

Feel the Burn
Last winter, like everyone else, I learned the term polar vortex. My introduction to it came on a goose hunt. Only an idiot would hunt on a day with 25-mph north winds at minus 4 degrees, but there were extenuating circumstances: It was the last day of the season when my friends could hunt. Besides, the geese would have to eat—and we had a plan that wasn’t entirely idiotic. The birds were feeding within 100 yards of a farmyard full of machinery. We’d set the decoys, then sit in a warm truck next to a combine and wait for geese to fly.

Our spread numbered just four dozen, if only because we knew that every decoy we put out was one we would have to pick up. We set out full-bodies and mixed in some shells because they mimic the way geese flop on their bellies to feed in the cold. Ducks flew first. The season was long closed, but that was our signal to leave the warm truck and get in the blinds. From the minute we lay down, the wind blew stinging, gritty snow over us. I had put a camping pad in my blind as extra insulation.

The first flocks swung high and wide of the spread, intent on a field across the road. A bunch of 25 set up for a landing, then had second thoughts. Too late. Our volley dropped three. A little later, a single goose decoyed—and so it went, until I noticed the back of my hand was white, numb, and waxy, the early stages of frostbite. I tried warming it with body heat under my arm, pulling it back out to shoot one last goose. Then I gave up, ran for the truck, and cranked the heater. My hand throbbed painfully as circulation returned, but I had three Canadas, one band, and all 10 fingers.