Four Best “Worms” for Ice Fishing and How to Use Them 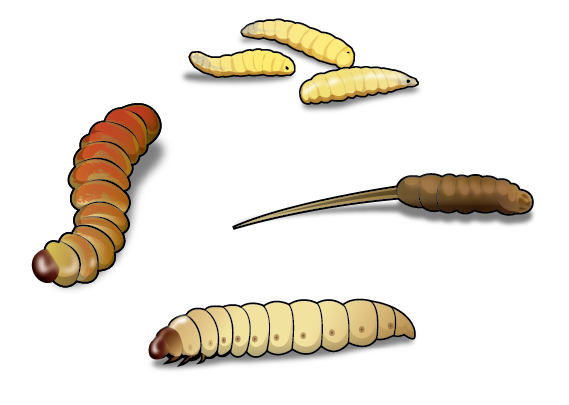 When lakes and ponds freeze, out come tackle-shop signs advertising cute-sounding larva baits like butterworms and mousies. Many anglers assume they’re all the same, grab a container of one or another, and head off to drill holes. But you’ll catch more fish if you know which tiny creepy crawler is best for your target species. Here’s a breakdown of the four most common ice “worms,” and how to fish them the right way.

Spikes are the pale larvae of the bluebottle fly and closely resemble what you might find hanging out in your garbage can. Due to their tiny size, spikes are best for catching smaller fish with smaller mouths, like perch and sunfish. Top off a Marmooska or Caty Jig with a spike or two, and you’ve got a lethal panfish combo.

The larva of the drone fly is also known as a rat-tailed maggot—but mousie sounds better. Slightly larger than spikes, mousies secrete a white liquid when pierced that bigger perch and crappies can’t resist. Thread three or four of them onto a No. 2 Swedish Pimple, and jig it throughout the water column until you get a bead on the fish’s holding depth.

The Tebo worm, or butterworm, is the larva of the Chilean moth. Not native to the U.S., it is sold here as both pet food and bait. While butterworms catch plenty of panfish, they are deadly for hard-water trout. Pierce two or three on a 1⁄8-ounce Kastmaster spoon and jig it aggressively to lure them in, pausing occasionally to let them eat the bait.

These wax-moth caterpillars, like butterworms, are also sold as pet food. Waxworms have a soft body and are larger than spikes and mousies. They’re considered an all-around favorite, as they catch everything from crappies to trout when dressed on a Swedish Pimple or Kastmaster. But they also catch pickerel and walleyes when hooked on a Rapala Jigging Rap.