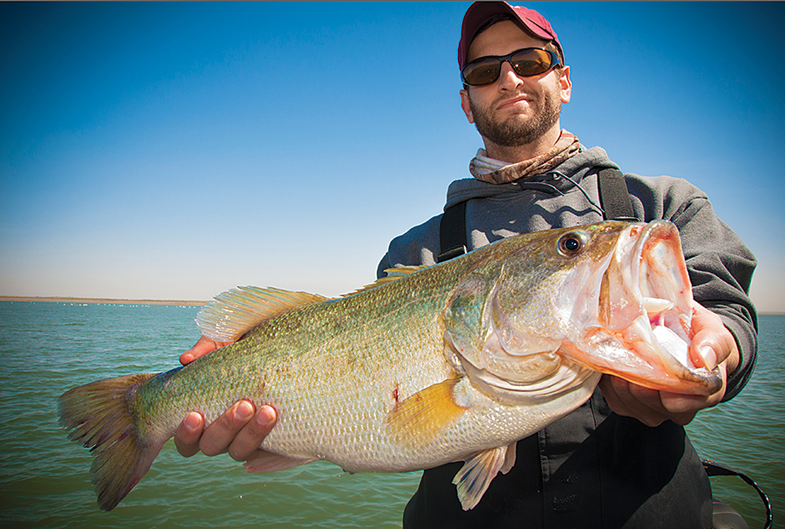 Since the dawn of competitive bass fishing, recreational anglers have clung to and leaned on trends set by the pros. Right now, using sensitive spinning outfits, light line, and finesse baits to catch big bass is what’s in fashion, and for good reason. Thanks to modern braid and fluoro­carbon, 6- to 10-pound-test is stronger than it’s ever been. Couple that with the fact that prime bass ­waters see loads of angling pressure, and suddenly you gain an edge by presenting small baits with subtle approaches to fish that no longer want to hit the same spinnerbait being yanked on 12-pound mono that they’ve seen season after season. That’s why tournament pros are getting in the money with techniques like spybaiting, light-line drop-shotting, and working micro wakebaits, and understanding these methods can help you score on the toughest days.

Spybaiting is a Japanese-born technique that allows an angler to target suspended bass holding in a specific level of the water column. It’s not completely clear where the name came from, but it’s generally believed that the technique was developed to hook wary bass in ultra-clear water, with the lure operating as a “spy” in hostile territory.

Spybaits are small, slow-­sinking hard baits with double props. What sets these lures apart from jerkbaits is that they don’t need to be worked aggressively in order to reach depth, and once they’re in the zone, a slow retrieve gets the props spinning, producing vibration without wild movement that may scare spooky bass.

Pro angler Kevin Hawk, a San ­Diego native and a ­finesse fishing ace, says spybaiting is most effective when there is at least 6 feet of visi­bility, though 10 is even better. The technique can come into play at any time of year, but Hawk uses it most often during the postspawn and when fish school up in fall. He favors the Duo ­Realis Spinbait 80.

“After I identify the holding depth of the suspended fish, I make a long cast past the school,” Hawk says. “The Spinbait will sink about 8 inches per second on 6-pound fluoro­carbon, so I’ll count the bait down to the approximate depth and then begin reeling slowly.”

Hawk tells those new to spybaiting to reel through the bite, maintaining the same slow, steady retrieve if you get bumped but don’t connect. Most of the bites feel like a light tick, or the rod simply loads up.

The light fluorocarbon is the key to success, Hawk says. You might think light, thin-diameter braid would work well and get the baits down faster, but Hawk gets fewer bites on braid, partially because clear-water bass can see it as the lure moves through the school.

Pro Kit
Hawk likes a long rod with a thin tip for spybaiting, as it allows him to feel subtle ticks from a distance and will be soft enough to stop tiny spybait trebles from pulling out during a fight. A reel with a high line capacity is also a must, considering the technique requires long casts.

Spybaits give off lots of vibration with just a light twitch, unlike jerkbaits, which require a more aggressive retrieve to work.

Tournament pro John Voyles is no stranger to light-line tactics. He uses them often, even in high-dollar events. Voyles’s home water is the Ohio River, which notoriously presents anglers with dirty conditions. In late summer, the Ohio is generally cleaner and slower, and that’s when Voyles leans most heavily on light line and a drop-shot rig.
“Low water exposes more shoreline cover,” says Voyles. “But that also makes prime spots easier to pick out, and they get pressured fast.”

To score bass that are on guard at this time of year, Voyles spools up with 10-pound braid tipped with 4 feet of 6-pound fluorocarbon leader. This combination is key, as it offers the best sensitivity for feeling light hits, and the camouflage to fool line-shy bass. Instead of using a traditional drop-shot circle hook, Voyles opts for a Roboworm Rebarb hook, which has a plastic barb below the eye that keeps the worm straight on the shank. He Texas-rigs a 41⁄2-inch worm, rather than hooking it by the nose, so that the bait slides through cover more easily. That’s important because shaking cover as you’re trying to free a snag can scare bass.

Pro Kit
Voyles looks for a spinning reel with a sensitive drag system that can be dialed to pinpoint accuracy. It’s essential for working feisty fish out of snaggy cover with light line. He prefers a medium-action rod with a softer tip that won’t react too aggressively with braid.

Dark-colored worms produce all year long, but in murky water, opt for a bait with a chartreuse tail.

Bass pro John Crews has been using small topwaters on clear-water reservoirs like Smith Mountain Lake near his home in Virginia for years. This downsizing technique can turn a slow day around, especially later in the season, when Crews finds bass primarily gorging on tiny baitfish. His go-to lure is the Spro BBZ-1 Shad, which is a slow-sinking wakebait that measures only 21⁄2 inches. To deliver the bait, Crews uses spinning gear with light line, which facilitates the bulging, waking surface action and helps bomb the lure to bass that are busting far-off bait schools.

Other finesse spinning tactics rely on fluorocarbon for stealth, but here, Crews prefers to tie directly to 10-pound braid. He likes that braid floats, making it easier for him to keep the wakebait riding just under the surface. He’ll adjust the rod angle depending on the distance the bait is from the boat.

Wake Up! A wake bait on lght braid will cast a mile, so you can keep clear of spooky fish. Photo by Brian Grossenbacher

“At the end of a cast, when the bait is way out there, I reel with the rod at 10 o’clock,” says Crews. “As the lure gets closer, I gradually lower the tip. The idea is to have the waking lure break the surface here and there to mimic a wounded or fleeing minnow. On a calm day, that little ripple is deadly.”

Crews will also reel the bait at a faster pace if he feels the activity levels are high, such as when the bass are schooling. On quieter days, this light-line topwater technique can still pay, he has learned, because in clear water, louder chugging or popping baits can actually turn fish off rather than attract them.

Pro Kit
Light braid lets Crews cast a small lure a country mile, which helps him cover a lot of water in a single throw. Plus, braid provides a surer hookset when he’s swinging on a faraway bass. A longer spinning rod adds casting distance, and the higher the tip during the first part of the retrieve, the closer to the surface a wakebait will ride.

The subtle surface disturbance created by a wakebait can trigger massive strikes from reluctant bass.