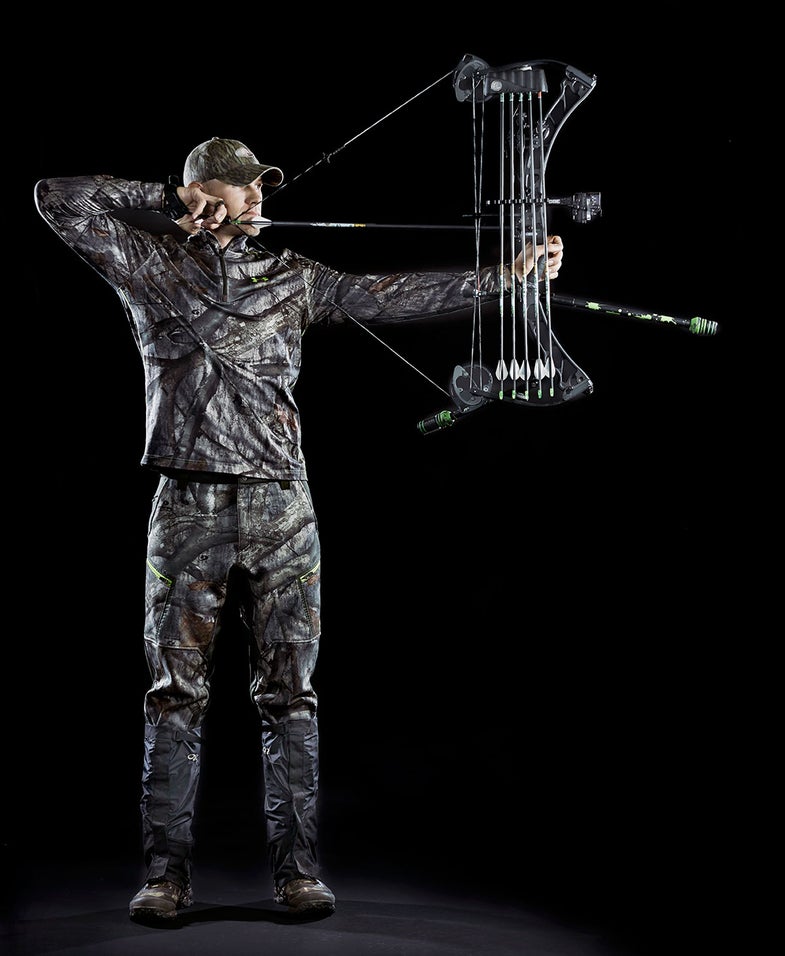 Here is exactly how Morgan shoots.

Stand Steady
Morgan sets his feet perpendicular to the target about shoulder-width apart, then opens both his front foot and back foot slightly for better stability. “A good trick is to stand on a piece of cardboard, get your feet just right, and have someone trace them,” he says. “Then whenever you practice, put that cardboard down and stand in the outlined footprints. After a month you can ditch the cardboard, and you’ll take the exact same stance every time you address a target.”

Anchor Up
Morgan uses three anchor points. First, he puts his release hand against his face in the exact same spot on every shot. Second, he rests the tip of his nose on the string. Third, he holds the release in precisely the same way, shot after shot. “Not everyone thinks of this last one, but if you change how you grip the release, it will affect your shooting. You need to do it the exact same way, every time.”

Get a Grip
Stick your bow arm straight out and make a thumbs-up. Turn your thumb inward about 45 degrees and open your hand. Now place the grip on the bony part of your palm’s heel, between the two fleshy pads. “I favor the thumb side some,” says Morgan. “Otherwise the pads on either side can influence your grip inconsistently.” Lower your fingers safely under the shelf, but leave your hand relaxed as you shoot.

Keep It Straight
Form as straight a line as possible from your grip hand back to your lead shoulder, and keep that shoulder low and extended. “Don’t entirely lock out your bow arm, but don’t bend it much either,” Morgan says. You also want a straight line from the tip of the arrow all the way to the point of your string-arm elbow. “It’s easy to put a kink in that line where your release meets your face, so try to keep that straight.” Finally, try not to lean forward or back with your torso; stand straight and tall.

Relax
At this point, back-tension shooters push hard toward the target and pull hard into the back wall. Morgan pushes and pulls only hard enough to keep the bow drawn. Comparatively speaking, he relaxes, and concentrates on aiming.

Center Focus
Morgan tries to cover the bull’s-eye with the pin, but he doesn’t worry about a little movement. “The key is to concentrate on the center of the bull,” says Morgan. “It’s amazing how much movement you can get away with and still make a good shot by just thinking about the middle.”

Be Surprised
Instead of back tension, Morgan trips the release with his fingers. He typically uses either a thumb or a hinge release, but the principle is the same with a caliper style. “You want to slowly squeeze the trigger, or press the thumb button, or rotate your hand until the release goes off. It should be a surprise every time.”

End Naturally
Don’t exaggerate the follow-through. Don’t consciously throw your string arm back at the release. “If you have correct form and a surprise release, proper follow-through is just going to happen—along with better accuracy.”