Levi Morgan on his journey to become the best 3D archer and how you can improve your shot. 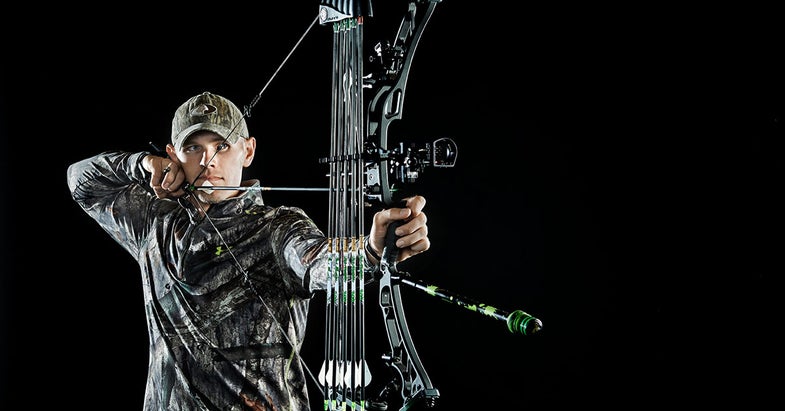 Levi Morgan can’t repress a grin when I meet him near his southwestern Pennsylvania home—as if he’s got an inside joke. Is something funny?

“Honestly, dude, I’ve been smiling like this since last summer,” he says.

In Aug. 2014, Morgan claimed his eighth straight ASA Shooter of the Year title, passing 3D legend Jeff Hopkins’s record of seven, an achievement archers likened to Joe DiMaggio’s 56-game hitting streak. Back in 2007, when Morgan was 20, he faced Hopkins in a head-to-head shootout. “He stared me in the eye and said, ‘No one will ever touch my record, kid.’

“All my life, if someone tells me I can’t do something, it just makes me nuts,” Morgan says, and laughs. “That clinching event last summer was the most pressure I’ve ever felt. I had a headache for a month leading up to it.”

He’s just relieved it’s over, he says. But who could blame him if his grin has a little to do with the fact that he is now, at age 28, the best 3D shooter ever to pick up a bow? That, and all the Michael Jordan comparisons.

Morgan started hunting with his dad when he was 3 years old and tagged his first animal at 8. Now, as host of Name the Game TV, with more than 50 P&Y trophies to his credit, he has become the face for a fast-growing number of bowhunters eaten up with extreme accuracy, many of whom cross over into 3D. His celebrity is reaching beyond the outdoors; he spent a recent Archery Trade Association show hanging with the Steelers’ Ben Roethlisberger and ESPN’s Merril Hoge. Yet he couldn’t be more approachable. It’s part of his appeal. As one of his competitors says, “You couldn’t get your ass kicked by a nicer guy.” He lives in a rural coal-and-steel town with his wife and cohost and fellow 3D pro Samantha Morgan and their 2-year-old son, Landon.

So he’s got plenty to smile about. But what he seems as proud of as anything is that he is revolutionizing the way people shoot the compound bow—in a way that makes hyperaccuracy accessible to any shooter, including hunters.

The Big Reveal
For decades, there has been only one “correct” way to shoot a bow, as taught by top coaches. And that way is back tension: pushing and pulling at full draw and then slowly squeezing your back muscles together until the bow fires. “I learned it when I was 14 at an archery school with Larry Wise, who wrote the book on back tension,” Morgan says. “It was total gospel.”

A couple of years ago, at a packed ATA seminar, the world’s top shooter dropped a bomb: “A member of the audience asked, ‘How do you use back tension?’” After a long pause, Morgan decided to just put it out there. “I said, ‘Honestly, I don’t use back tension.’” There were audible gasps. To his surprise, the other pros on the panel admitted the same. Today, he guesses that no more than one or two of the top 25 3D pros use back tension.

“I can’t tell you how many people say, ‘That’s such a relief to hear because I’ve been struggling with back tension for years.’”

Legions of hunters looking to shoot better have tried it. Many have picked up elements of the method. But ultimately, most have found it too difficult to fire a bow using their back muscles, and scrapped the idea. Morgan proves that there’s another way to shoot great, and he believes that the growing interest in hyperaccuracy can have big upsides in the field.

With practice, you can definitely extend your range, he says. On a good day, Morgan shoots 4-inch groups at 100 yards. “But even if stretching it out in the field isn’t your goal, learning to shoot ultratight groups at 60 or 80 on the range can mean you may never screw up a shot at a buck inside 30 again.” There’s no reason you can’t be lights-out in the deer woods, he says. “And you don’t have to master back tension to do it.”

Just Relax
Anyone can shoot well in the backyard. The real question for both tournament archers and hunters is this: Can you do it when you’re a nervous wreck? Say, when Shooter of the Year is on the line, or when a giant buck walks in? The answer comes down to how much your shooting method allows you to do the exact same thing, time and again, even when your nervous system is in revolt. This is where back tension falls down, says Morgan.

If you’re thinking, So what? I don’t shoot back tension, hold on. While most hunters do not use their back muscles to actually fire the shot, Morgan explains, many do apply back tension’s other key principle: pushing and pulling at full draw. “This comes straight from back-tension theory, and because it’s the easiest part of the method to learn, huge numbers of hunters have incorporated it into their shooting.”

The problem is that it’s too easy to push or pull a little more or less from shot to shot—especially when you’re nervous. “I used to pull harder when I was amped up,” says Morgan. Because the hard back walls on most of today’s compound bows have no give, pulling a little harder, for example, moves the bow, affecting the shot.

“I finally decided to just relax and let the bow shoot,” says Morgan. “That’s when I really started winning. When other guys would fall apart at the end of a shootout, I started staying right in it, even though I was as nervous as they were.” It’s the same in hunting, he says. When a buck walks in, you get a massive surge of adrenaline that makes you push and pull a little harder than you normally do, and you miss to the left or right.

The bottom line, says Morgan: “Pushing and pulling has a huge range. But relaxed is relaxed.” The idea is to pull just hard enough to stay against that hard back wall, and then hold there. “Because it’s so much more repeatable, you can shoot just as well in the field as you do on the range.”

Strike a Balance
The relaxed method also helps you perfectly balance your bow, says Morgan. “Back-tension shooters usually put a ton of weight up front, because they need something to pull against.” Meanwhile, most hunters do the opposite. “Hunters think a stabilizer is a vibration dampener and just put a little 5- or 6-incher on there and call it a day. It’s a huge mistake.”

All of your accessories are on one side of your bow. Unless you balance that out, you have to torque the bow in order to align the sight’s bubble level. “Ninety-nine percent of you should be shooting a side bar,” says Morgan.

A good test is to pull your bow back naturally, close your eyes, settle in, open, and look at the bubble. “If it’s not level, get a side bar and adjust until it’s right.” In terms of how much weight to put out front, draw back and look at your pin while you’re aiming: “If it wants to creep up toward the top of the bull, add a little weight. If it dives to the bottom, lose some.”

Once you’ve got the bow perfectly balanced and you learn to relax at full draw, the pin will just sit right on the target, says Morgan. “You’ll be amazed how much longer you’ll hold it there.”

Let It Go
Many shooters believe that if you don’t fire a bow via back tension, you’re a puncher. “You see that all over the Internet forums, and it’s ridiculous,” says Morgan. “Sure, back tension is one way to get a surprise release, but it’s not the only way.” No matter what kind of release you use, it’s a simple matter of applying fluid but aggressive pressure until the bow fires. “If all you had to do was squeeze off the trigger, you could do it perfectly every time. That’s not the problem.”

The problem is mentally separating aiming from pulling the trigger. “That’s the hardest thing in -archery,” he says. “My own experience mirrors everything I’ve read on the subject, which says that your conscious mind can only do one thing at a time, while your subconscious can do many. The only way I can shoot a bow is to aim consciously, and do everything else subconsciously.”

That means you have to practice your trigger release on a blank bale until you don’t have to think about it. You just aim and aim and pfunk—​the bow goes off. “That’s how it has to feel. If you think about the trigger, you’re screwed.”

Morgan trips a hinge release by rotating his fingers.

Morgan’s advice is to keep two identical releases, but with different timing or trigger weights, which prevents you from anticipating the shot. For years his signature move in tournaments was to shoot one release until the shootout, and then switch. “My coaches would always say, ‘Man, don’t do that,’” he recalls. “But it worked for me.”

And that seems to be Morgan’s style—like when a coach tried to teach him back tension. “I remember thinking, I can’t do it this way.” So he made up his own. Hunters are always being told they’re doing it wrong. “Don’t listen to that,” he says. There’s more than one right way to shoot a bow, he insists—and shoot great. “This is the way I do it. And, well,” Morgan says with a smile, “it’s worked pretty well for me.”