Can numbers are steadily climbing across the nation, putting the big duck on many hunters’ bucket lists. Here’s how to get yours 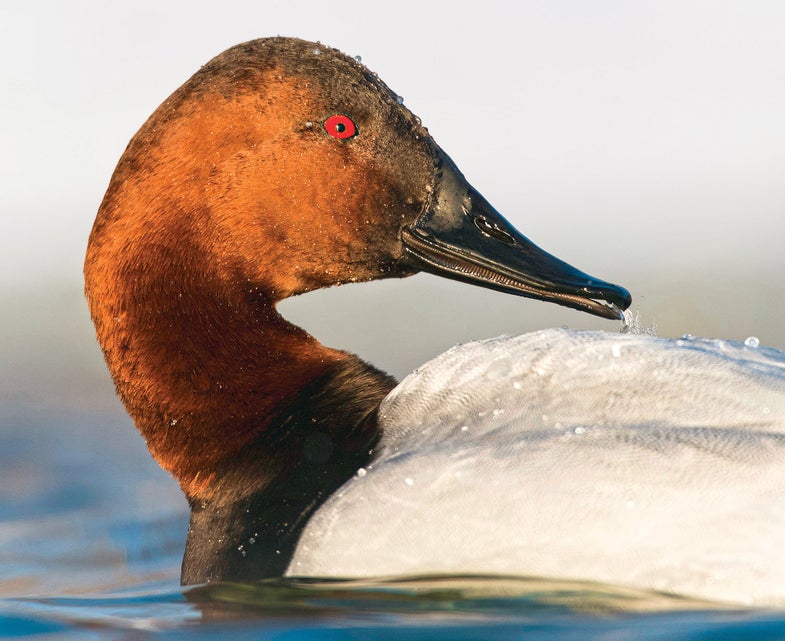 The King: A preening drake canvasback shows off his colors.. Steve Oehlenschlager/Alamy
SHARE

He’s big. He’s brutish. He’s ruggedly handsome. If Clint Eastwood were a duck, he’d be a drake canvasback. Yeah, they’re both that cool. That’s why in the waterfowler’s world, few, if any, trophies hold such a lofty position as does the canvasback.

Canvasbacks can weigh up to 3½ pounds or more and have a wingspan reaching nearly 3 feet across, making them the biggest species of diving duck found in North America. The canvasback migrates late in fall, and their flight is strong and direct, with flocks forming a distinctive V pattern high overhead. And fly they do: The canvasback is one of the fastest ducks on the continent, able to reach speeds upwards of 70 mph.

Canvasbacks feed on plant matter that they find beneath the surface. Appropriately enough, the bird’s Latin name, Aythya valisineria, is taken from that of wild celery (Vallisneria americana), which is the duck’s preferred food when it’s not breeding.

Visually, the drake canvasback—with his crimson head, high sloping forehead, black chest with white underbelly, silvery gray back, and swept wings—is unmistakable, even compared with a drake redhead. A wonderful soft brown all over, the hen can often is confused with the hen redhead but shares the drake’s wedge-shaped, sloping bill.

The canvasback at one time had a very uncertain future. Cans are considered good eating for a diving duck, and the species was hunted almost into nonexistence by commercial gunners during the early part of the 20th century. The can was granted a pardon via the Migratory Bird Treaty Act of 1918, but the bird’s future was still unstable. Over the next several decades, its population experienced radical ups and downs, with daily bag limits being one some years, and none the next.

As they have been for the past couple of seasons, can numbers are on a gentle upswing. As a result, the U.S. Fish and Wildlife Service has allowed some flyways to offer waterfowlers up to two canvasbacks in their daily duck bag.

Earlier this year, the USFWS released its 2016 Trends in Duck Breeding Populations report, based on surveys that were conducted in spring by the USFWS and the Canadian Wildlife Service. While canvasback numbers overall fell 3 percent from last year (from 757,000 to 736,000), the change from the long-term average reflects an increase of 26 percent.

In most parts of the country, it’s a relatively simple matter to shoot a mallard or a Canada goose. But with very few exceptions, duck hunters don’t just walk out the door saying “I’m going to go down to the pond and shoot a canvasback.” Yes, a puddle duck hunt can result in a canvasback’s gracing the strap, but that’s more luck than intent.

The can’s realm is the great wide open. Most are shot over very specific spreads, big water, dozens and dozens of decoys, and specialized boat blinds. The traditionalist canvasback hunter will opt for a flat-on-your-back layout boat tendered by a large, high-sided, rough-water motorized skiff.

Those who simply wish for a bull can to put atop the mantel­piece typically opt to hunt with a guide. On Pool 9 of the Mississippi River near Ferryville, Wis., that man is Tony Toye (toyes​big​river​guide​service.com). Other hotspots include the Chesapeake Bay, the Columbia River in eastern Washington, Devil’s Lake in North Dakota, and Delta Marsh in Manitoba.

Canvasbacks are commonly found in rafts of 1,000 or more individuals, and so spreads for them are usually a thing of numbers.

Toye’s typical spread on the Mississippi will consist of roughly 100 floaters, the majority being white-sided drakes for visibility purposes. A blob of 75 decoys, to mimic actively feeding birds, is set close on the upwind side of the blind. A 20-yard landing hole, followed by two lines of decoys leading downwind, completes the setup. Cans approaching from downwind see the blob and follow the lines of decoys into the hole.

On the Delta Marsh and similar waters, two dozen drakes set randomly can be the hot ticket.

When you’re targeting canvasbacks or late-season divers in general, don’t go cheap in terms of ammunition. Cans are big, strong, well feathered, and heavily muscled, and you want a shotshell that’s as tough as they are.

Shots over decoys generally aren’t long; 20 to 30 yards is typical. However, longer passing shots in excess of 40 yards can prove problematic for light loads and smaller pellets. Use a 12-gauge throwing a minimum of 11⁄4 ounces of quality No. 4 nontoxic pellets such as Hevi-Shot, or at the very least a 50-50 mix of steel and tungsten No. 2 shot, such as Hevi-Metal. Gunners should be prepared for a follow-up shot on swimming cripples; speed and accuracy count here.