An Interview with Kim Bain-Moore, First Woman to Compete in the Bassmaster Classic

Mum started taking me fishing in a backpack before I could walk. Every weekend my family was on the water... 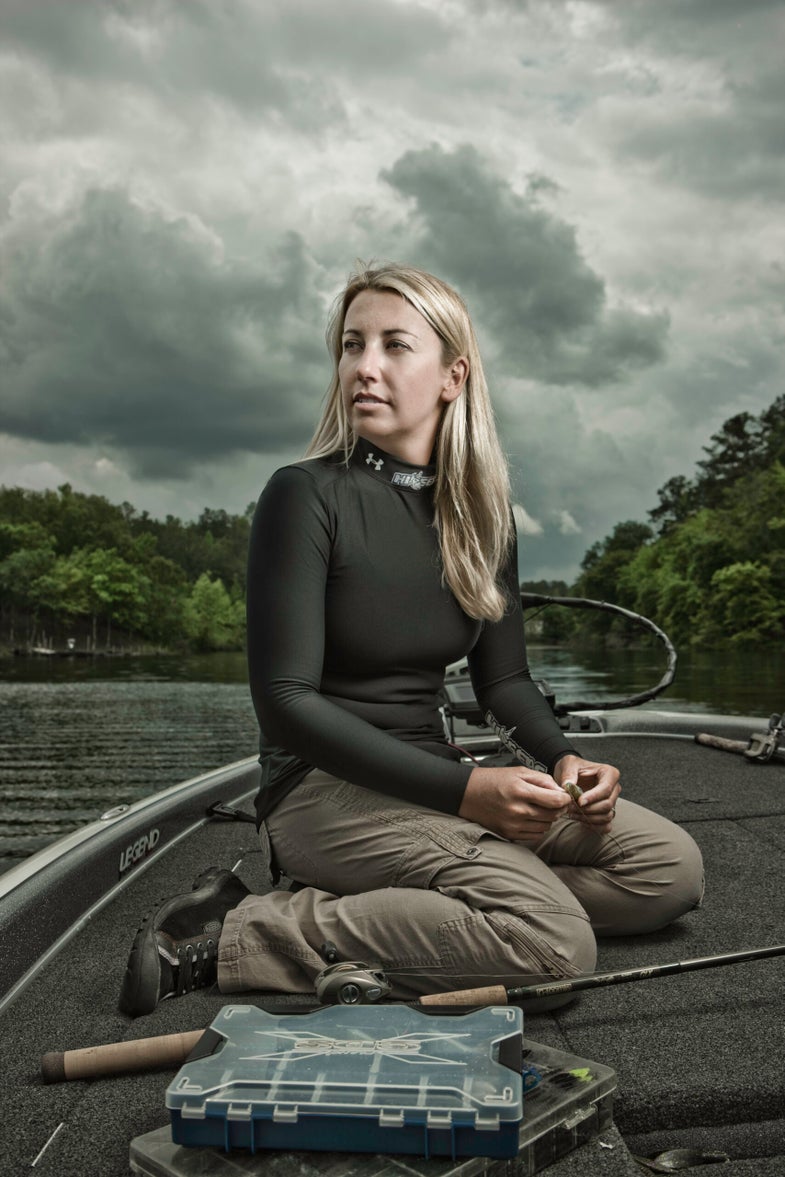 Mum started taking me fishing in a backpack before I could walk. Every weekend my family was on the water for saltwater panfish, Australian bass, carp–whatever. My father ran a fishing circuit called the Australian Bass Tournaments, which was around 100 boats, and the championship prize was a trip to the U.S. to compete as a co-angler in a BASS event. So I learned about the U.S. scene and started dreaming about going there and fishing the Classic one day. Finally, in 2000, we put the money together and I packed my things, then found myself in one of those crazy moments–an 18-year-old standing in the San Francisco airport with a big ol’ Plano rod tube and a backpack, looking for a guy called Norval Pimentel to pick me up.

I caught my first largemouth in America with Norval on the California Delta. He told me to “grab a junebug Gitzit, Texas rig it, and flip it into the tules,” which was just gobbledygook! And the bite was so different–usually the fish in Australia hit a lure so hard they set the hook on themselves. The biggest difference between U.S. and Australian bass fishing is that American bass have a much bigger mouth and they jump. Aussie bass have sharp gill plates and sharp spines. They’ll cut you up bad if you handle them like a largemouth.

That first day I caught an 8-pound bass. It’s still my biggest largemouth to date.

**In the early days the biggest challenge****** was getting around on Amtrak and Greyhound. We drive on the other side of the road in Australia, so I wasn’t comfortable renting a car. When I made my first BASS Open Championship at Toledo Bend, Texas, in 2003–I was the first woman to do so–I flew to Houston, took a shuttle across town to a box store, and waited six hours for the Greyhound bus, which took me to another station, where a friend drove me to the lake. But the minute I stepped on the water, I wasn’t thinking about anything other than my next cast. I’ve been fortunate to have that focus–it comes from your passion, I think.

The moment I qualified for the Classic [at the 2008 Women’s Bassmaster Tour Championship] was pretty emotional for me. It had been a big year, and I’d been putting in a lot of hard work to do my best on the water. There were three days of intense competition, and then the words: You’ve won. You’re going to the Classic. Suddenly the hard work and support of my family and the funny stories getting around the country flashed before me, and I thought, “Wow, this is what I was working toward and it’s finally happened.”

One of the challenges in the Classic was having only 10 rods in the boat–usually my main string will be around seven rods, but I’ll have at least 30 in my rod locker onboard, each for a slightly different purpose, plus a few backup outfits. Most of the time my spinning reel and baitcaster are spooled with Grand Slam braid, then I’ll tie on a fluorocarbon leader, about a rod-length, with an Albright knot–that’s something I brought from Australia. If it’s a power bite, I’ll be swinging a Reaction Innovations Sweet Beaver; if it’s a finesse bite, I’ll use a Flirt Worm.
**
As for being the first lady at the classic**, people have used the word pioneer, but I’m a little sheepish about that. I was just proud the ladies had the opportunity for somebody to go. It’s been a long time coming and it certainly adds to the tournament and helps to grow the sport.

The dynamic between the fellas and me was interesting. Some guys were so focused on the tournament, they weren’t concerned with me. Others were tremendously supportive, like Skeet Reese, who saw me catch a couple fish and was whooping and hollering louder than I was! Then there were some guys–just an angry, sexist few mumbling and conniving in the background–who didn’t agree with my being there because there hadn’t been a lady in the past. But just because it hasn’t happened before doesn’t make it wrong.

For me, there’s no real difference in competing against men or women. Of course, when it’s men you’re conscious of the fact that you’re the only lady. But when it comes down to it and you’re on the water, you’re so focused on what you’re doing, you’re not really paying attention to what everyone else is doing.

To succeed in a lifelong goal, you have to keep it in the back of your mind all the time. Then when you’re making decisions, you consider how they’ll affect your goal. I use a trigger word as a password on my computer, so every day I think about what I’m doing toward my dream. Also, you really have to appreciate the journey, the adventure, and you can’t be too desperate. I feel the same way about hunting. I enjoy the walk in the bush, even if I don’t shoot a deer that day.

My goal is to do well and maybe qualify for the Classic again, but I’ll be very proud of whoever goes. The more ladies who walk across that stage, the better.