There wasn’t much of a bite going for avid angler Bruce Sederberg on January 16, 2013, but the last fish... 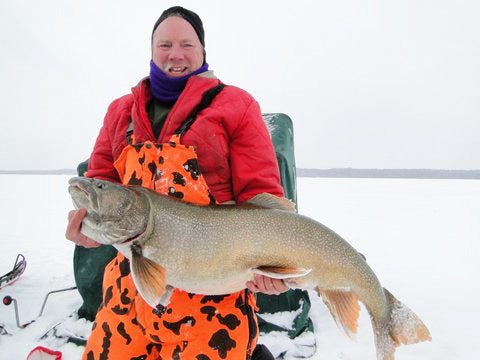 There wasn’t much of a bite going for avid angler Bruce Sederberg on January 16, 2013, but the last fish he hooked that day ended up being the world’s largest lake trout ever landed with a pole and line and released through the ice.

Sederberg was ice fishing White Otter Lake, just northwest of Atikokan, Ontario, Canada–as he’s done that time of year every winter since 1983–when the 46-inch goliath engulfed his jig in 58 feet of water. “I had no idea the lake would ever produce a lake trout this large,” says the 57-year-old Duluth, Minnesota, resident.

The moment Sederberg set the hook he knew it was a fish of huge proportions. “I felt the hit, set the hook and… nothing happened. The rod doubled and the line just sat there as if I had hooked a boulder,” he added.

While fighting the fish, it regurgitated what looked to be a 3-pound whitefish. “Why it ate my tiny lure I’ll never know,” he says.

Sederberg fought the fish for 45 minutes, with his nephew, Bryan Sederberg, standing by part of the time. “The fish would take out a massive amount of line at a slow, steady pace, then when it would stop and I was able to regain what it stripped,” says Sederberg.

The fish was finally pulled up to what Sederberg calls his “binocular hole” – that’s two side-by-side 7-inch holes he drills with his hand-auger, with the center chipped out. His nephew was able to use a gaff to just nip the fish’s yap under its nose and pull it through the ice. “The fish was so big it made a sucking sound as its belly rubbed the edge,” he claims.

Neither angler had a measuring tape. Wanting to get the fish back into the lake as soon as possible, Sederberg laid the behemoth in a fresh patch of snow and made impressions at the tips of its nose and tail. “There are fish to eat and fish to release. I knew right away while fighting this fish that as soon as I landed it, she would go right back in.”

Sederberg and his nephew took turns reviving the fish when it finally turned tail and pulled free from Bryan’s numb hand and swam quickly back to bottom. Just a few moments after its release, another friend came over who had a tape measure and took readings of the indents in the snow. “It was an honest 46 inches on the dot,” stated Sederberg.

As of February 8, 2013, Sederberg’s fish–estimated to be 40 to 44 pounds–officially replaces the Fresh Water Hall of Fame’s old world-record ice-fishing catch-and-release lake trout on pole and line, which was a 44-incher caught from Clear Water Lake in Manitoba, Canada, by Brent Danylko on April 11, 1920. Sederberg plans on getting a reproduction mount made of his record-setting catch.

Photos from top: Bruce Sederberg bellies the 46-inch lake trout–officially the world’s largest ever caught and released on a pole and line through the ice; Sederberg and his trout moments after landing it; Bruce’s nephew, Bryan Sederberg, releasing the fish seconds before it swam away.